Last month , Italian jazz vocalist Germana Stella La Sorsa released her debut album titled “Vapour” on the British label 33 Jazz. La Sorsa, now resident in London, has been making waves on the UK jazz scene and this album is the product of the inspiration generated form her move to thee UK capital. 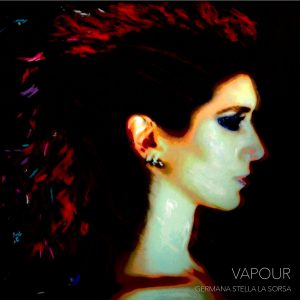 In the press release accompanying the album Germana stated “I’ve always felt a bit self-conscious about composing but all of a sudden after the move to London the ideas just started coming. I would get idea’s at some to the craziest moments, in fact, the basis of the title track came to me while in the shower, hence the title Vapour”.

The album contains 7 tracks that are a mixture of original compositions and some highly creative re-arrangements of Frank Zappa’s “Inca Roads, “Tacho” by Hermeto Pascoal and a wonderful version of the Victor Young and Edward. Heyman song, “When I fall in Love” that La Sorsa has retitled to “If I fall in Love”. Obviously not limited by convention, Germana choose to record this album with a Hammond Trio, definitely not what you would expect from vocal album.

Joining Germana on the album are Sam Leak on Hammond organ, Nick Costley-White on guitar and Jay Davis on drums and together they have produced an album that continues to surprise with each listening. The music is stimulating but never banal, the space between improvisation and written parts is fresh, seamless and the interplay between the musicians is perfectly balanced.

For those readers familiar with my reviews you will know that I try not to speak about the music from a technical point of view. For me it’s far more than this, it comes down to the feelings the music provokes and the experiences that define us as human beings. After listening to “Vapour” I realized there is a far more going on here than what appears on the surface. It reminds me of an underground river that you can only discover once you scratch the surface.

The album opens with an improvised piece aptly titled “In the Beginning” that is based on melodic fragments from the albums title tack “Vapour” that follows. I  particularly enjoyed her arrangement “Inca Roads”, a highly creative take on Zappa’s composition. Her vocal performance here is exceptional as is the contribution by guitarist Nick Costley-White.

I can highly recommend this album. From the first listening I felt kidnapped by Germana’s music and felt the need to dive deeper into this album. This is not an album that you can just put on in the background, it requires concentration and for those who take the time, you will be rewarded with a album of highly creative music.