We Jazz: the name evokes a communal experience, which Helsinki music lovers missed last year as the annual December festival was cancelled at the last minute.

Established in 2013, this is the only proper jazz festival in a city with a bubbling scene. The collective that runs it also operate a label, magazine and vinyl shop.

Since the record company was founded five years ago, a growing share of the festival’s acts has been from its own roster. This year’s festival (28 Nov–5 Dec) was predominantly a showcase for bands on the label, along with guests such as Swiss ECM pianist Nik Bärtsch and Norwegian/Swedish band Atomic.

As the label has expanded from local groups to an array of European and US artists, so has the festival. In this second pandemic year, though, there were several cancellations and Brooklyn drummer/producer Jason Nazary was the only musician from beyond western Europe among more than 30 acts. As before, the festival was dominated by middle-aged white guys – so here’s hoping for more diversity after the pandemic.

There was a strong Nordic presence, with many bands sharing members. Swedish bassist Petter Eldh and saxophonist Otis Sandsjö, both based in Berlin, were frequently onstage during the week-long festival. Besides their own raucous, crowd-stirring bands Koma Saxo and Y-Otis, they backed Swiss vocalist Lucia Cadotsch in poignant re-imaginings of jazz standards and tunes by Brian Eno and Randy Newman.

The highlight of the Koma Saxo show was vocalist Sofia Jernberg, an Ethiopian-born Swede who swoops effortlessly from Scandinavian folk and Zappa-esque baroque to melisma and ululation suggestive of Ethiopians such as Aster Aweke and Gigi. She soared over a catchy flute loop and laidback old-school hip-hop beat on “Koma Kaprifol,” a single released that day, previewing the group’s forthcoming album with Jernberg. 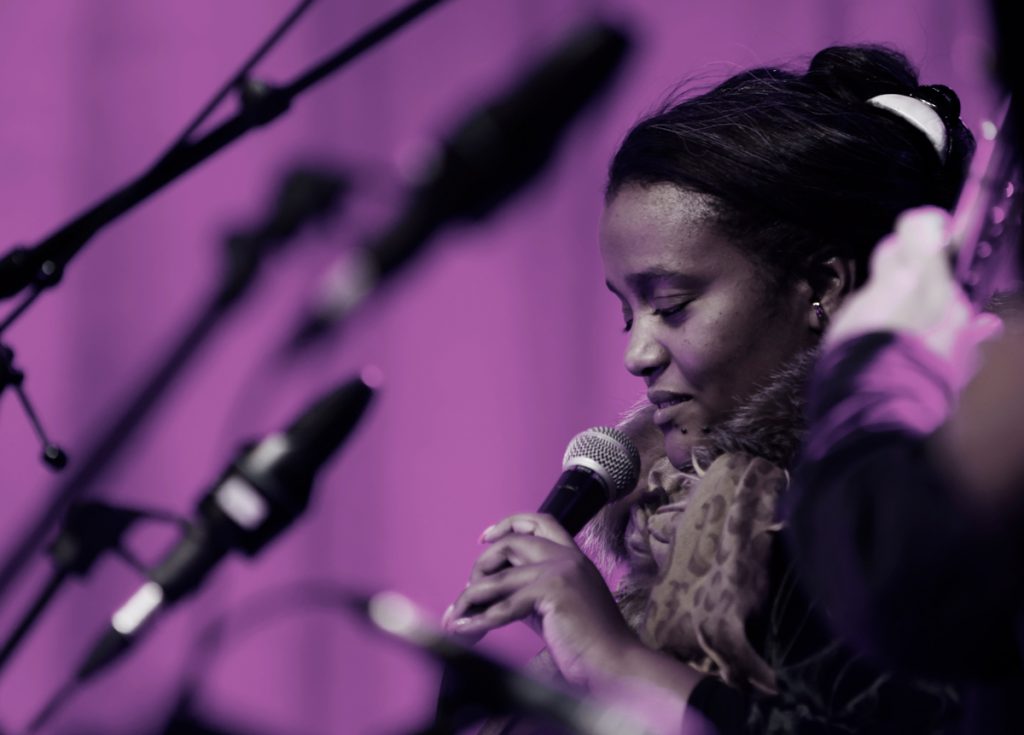 Several bands premiered albums released by We Jazz during the pandemic, including Gothenburg trio Dark Horse, who evoked a darker kin to e.s.t. or GoGo Penguin, with an undercurrent of Radiohead broodiness.

Later in the week he appeared with Ilmiliekki Quartet and his latest group OL1, an experimental trio with Norwegians Kim Myhr and Eivind Lønning that meandered close to dark ambient, trip-hop, shoegaze rock and even early Pink Floyd. Heady stuff.

Louhivuori also joined Fredriksson’s band for an intimate record-release gig celebrating the We Jazz release of their debut, Juniper, widely hailed as the Finnish jazz album of the year. The concert was the festival’s standout, with each of the members of the quartet humbly offering virtuosity to support Fredriksson’s affecting sax work and compositions.

That show was at Glasshouse, an arts and crafts space in a former department store, overlooking the main shopping street, where Christmas lights swayed in a bitingly cold wind. During the festival week the mercury plunged to around -15 C (5F), making the hike to some locations a challenge – but rewarded with warm atmosphere.

While We Jazz is known for staging shows in unusual locations such as a moving tram, people’s kitchens or a storage facility, this year’s venues were more conventional.

Lassy was one of four festival headliners who started out in the Five Corners Quintet, which kicked off the current Helsinki scene around 2003. Others included trumpeter Jukka Eskola, who played with his soul-jazz trio at the Artek design shop, and bassist Antti Lötjönen, who led his adventurous free-oriented Quintet East and also appeared with Ilmiliekki.

That quartet soon releases their sixth album on We Jazz, featuring trumpeter Verneri Pohjola as well as Louhivuori and keyboardist Tuomo Prättälä from Fredriksson’s group. Five Corners drummer Teppo Mäkynen was also busy through the week, playing an impromptu set with Eldh and Sandsjö and his latest solo project, Teddy Rok Atonal Drums.

This overlapping web of musicians and influences was fascinating to watch over the course of the week at varied venues scattered around the city.

At an Art Nouveau hotel from the same era, harpist Amanda Whiting played one of the festival’s most delightful sets, touching on bossa nova, cocktail lounge sounds and the propulsive, lilting swing of Dorothy Ashby. With tasty flute and sax solos from Chip Wickham, her quartet focused on tunes from her latest album After Dark (Jazzman). A highlight was the solo “Gone,” which brought to mind Stevie Wonder’s “If It’s Magic” with a more solemn undertow.

Whiting was part of a UK contingent that also included keyboardist Dan Nicholls, who’s played with various electronic artists, and released a near-ambient album on We Jazz last summer. Nicholls played with Y-Otis and in a solo set, which was sadly misplaced next to a noisy bar at Ääniwalli, a former warehouse and skateboard park that usually hosts rock shows.

Besides evening shows at a dozen venues, daytime events included a jazz brunch and discussions on sustainable touring and A Love Supreme, featuring US author Ashley Kahn. On the final afternoon, guests were whisked to a secret gig at an 18th century barn featuring Eldh, Nazary, guitarist Raoul Björkenheim and Norwegian drummer Paal Nilssen Love – a magical mystery tour to end this frosty odyssey.

Shortly after the festival ended, We Jazz announced a second edition of Odysseus, a smaller festival on a Helsinki island next July. More information can be found at the festival’s website here.

All photos by Maarit Kytöharju