Having been active in this business for over 40 years, it’s not often that you can claim a week full of first’s, however that’s exactly what I experienced in the Russian capital, Moscow last week. So let me provide you with some context. The current edition of the Jazz In Europe Magazine features Igor Butman, Russia’s leading exponent of jazz on the cover. Last week Butman turned 60 and to celebrate, Igor and his band, the Moscow Jazz Orchestra, joined forces with Wynton Marsalis and the Jazz at the Lincoln Center Orchestra for two concerts, the first at State Kremlin Palace and the following evening at the Tinkoff Arena in Saint Petersburg. The timing couldn’t have been better as the day after the Moscow concert the city went into lockdown. There’s a long history between Wynton and Igor and you can read more on this in my interview with Igor in the Magazine.

With that said, naturally I was honored to receive an invite to attend the event. So, after a number of trips to the embassy to receive my visa, a fresh PCR test (Russia doesn’t recognize the European QR Code) and various other hoops I found myself required to jump through, I headed to the Airport in Amsterdam for the first of a long list of firsts: My first trip to Russia and, for that matter, my first fight on Aeroflot. Having spoken to Igor on a number of occasions, I was well aware that he enjoyed a strong presence on the Russian scene, however, the true extent of his celebrity only started to become clear while checking in for my flight. The attendant insisted on seeing my invitation as well as my visa. After some polite back and forth, the supervisor joined us and after taking one look at my passport and visa commented, “Butman music, he’s OK” – Job done. On my arrival there was a taxi waiting for me and we proceeded to battle our way through peak hour Moscow traffic, destination hotel. With a little free time up my sleeve I headed out to explore some of the city and drive my friends crazy with the evitable selfie-fest in Red Square. 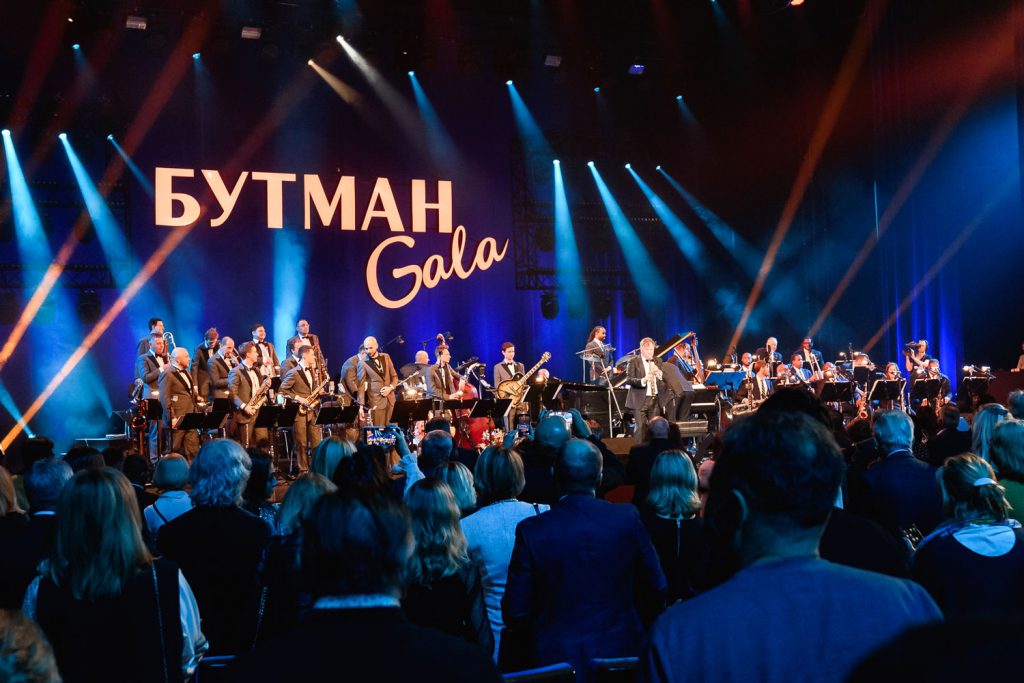 On show day, after arriving at the Kremlin and passing security, we had the opportunity to speak briefly with Igor who enlightened us with what to expect that evening. Both Igor’s band, The Moscow Jazz Orchestra and the Jazz at the Lincoln Center Orchestra will share the stage at the same time. There will be a number of arrangements that both bands will play together, each band will have the room to play their own repertoire and in addition, the show will include a number of special guests. Show time and yes, adorning the huge stage of State Kremlin Palace was indeed both the Moscow Jazz Orchestra (Stage left) and the Jazz at the Lincoln center orchestra (Stage right) with both rhythm sections placed center stage. Having spent a great deal of time in the Early Music world, seeing this set-up reminded me of Bach’s St Mathew Passion however this time without the Crucifixion!

The State Kremlin Palace theater is something to behold, not because of its spectacular baroque architecture, as one might imagine – this monumental building was constructed in the early 1960’s as one of the main symbols of the Soviet epoch and is where the first congresses of People’s Deputies were held. Currently used as a theater, the hall can accommodate 6000 visitors. On this evening the hall was close to full, a testament to the popularity of both orchestras. At this point I’d like to mention sound engineer Evgenii Potsikaylik who ensured that the sound in the room was exceptional, seriously this is no mean feat.

The concert opened with an arrangement by Nikolay Levinovsky of the main themes from Shostakovich’s 7th Symphony. Nicknamed the Leningrad, Shostakovich’s work soon became popular in both the Soviet Union and the West as a symbol of resistance to fascism and totalitarianism and is still regarded as a major musical testament to the 27 million Soviet people who lost their lives in World War II. It’s still to this day often played at Leningrad Cemetery, where half a million victims of the 900-day Siege of Leningrad are buried. I truly enjoyed Levinovsky’s arrangement and the way in which the two bands were integrated. This tribute to the fallen was then continued by the Jazz at the Lincoln Center orchestra with “Back to Basics” from the suite “Blood on the Fields”, Wynton’s Pulitzer-winning epic oratorio on slavery and freedom. This was truly an impressive start to the evening with both bands making a strong statement. 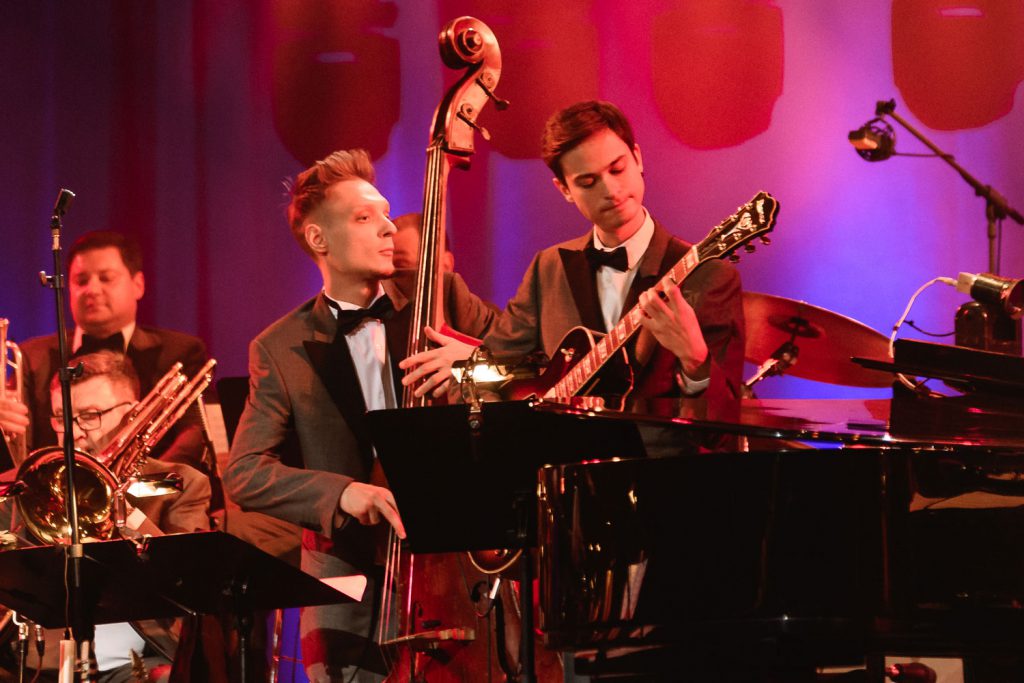 Following this, both bands performed individual pieces, “Young Beauty (Here She Is)” by the Moscow Jazz Orchestra (MJO) and a movement from “Concerto For Joe” by the Jazz at the Lincoln Center Orchestra (JLCO). Speaking of the latter, Wynton wrote this piece as a tribute to long time JLCO baritone sax player, Joe Temperley. This evenings excerpt from the piece featured  amazing ensemble work and solos by Wynton himself and saxophonist Victor Goines. Nikolay Levinovsky’s arrangement of “Young Beauty (Here She Is)” was interesting with its opening theme taken as a waltz and then moving to a medium funk feel giving room for an amazing solo by MJO guitarist, Evgeny Pobozhiy.

The first of the guests introduced during the evening was vocalist Valery Syutkin. Best known as the vocalist and songwriter for the Russian rock-n-roll band “Bravo”, Syutkin lead convincingly with his own composition “I Am That Is Necessary”, in an arrangement by Mikhail Savin, and then following this with “King Orange Summer”, also arranged by Savin. The Jazz at the Lincoln center orchestra followed with “The Holy Ghost” from Wynton’s Abyssinian mass, a piece written to commemorate the 200th anniversary of Harlem’s Abyssinian Baptist Church. Personally I found this to be one of the highlight’s of the first set with some wonderful collective solo passages and scintillating ensemble work.

Russian born vocalist Fantine was the following guest with “You’re Everything”, Chick Corea’s composition first recorded with Flora Purim on the “Light as a Feather”, in an arrangement by Nikolay Levinovsky. Fantine delivered a great vocal performance locking into the superb samba feel laid down by the Moscow Jazz Orchestra. Closing the first set, both orchestra’s performed Wynton’s composition “Baby I Love You”. Originally sung by Bobby McFerrin, tonight’s rendition featured Oleg Akkuratov (Pianist with the Moscow Jazz Orchestra) on vocals. With this piece Oleg showed himself to be not only an exceptional pianist but also a strong vocalist that swings like hell.

The second set started with both bands performing an interesting take on Nat Adderley’s classic ” Work Song”. Combining both Russian and American heritage, the set stared with Moscow Jazz Orchestra pianist Oleg Akkuratov providing a piano and vocal intro based on the well-known Russian traditional, “song of the Volga Boatmen” before merging into the arrangement of “Work Song”. It was highly impressive how seamlessly both bands blended as they traded chorus’. The set continued with the Jazz at the Lincoln Center orchestra revisiting music from the Abyssinian Mass, this time with the two movements, “The Father and The Son”. I’ve always enjoyed this work and seeing it performed live added an extra dimension. 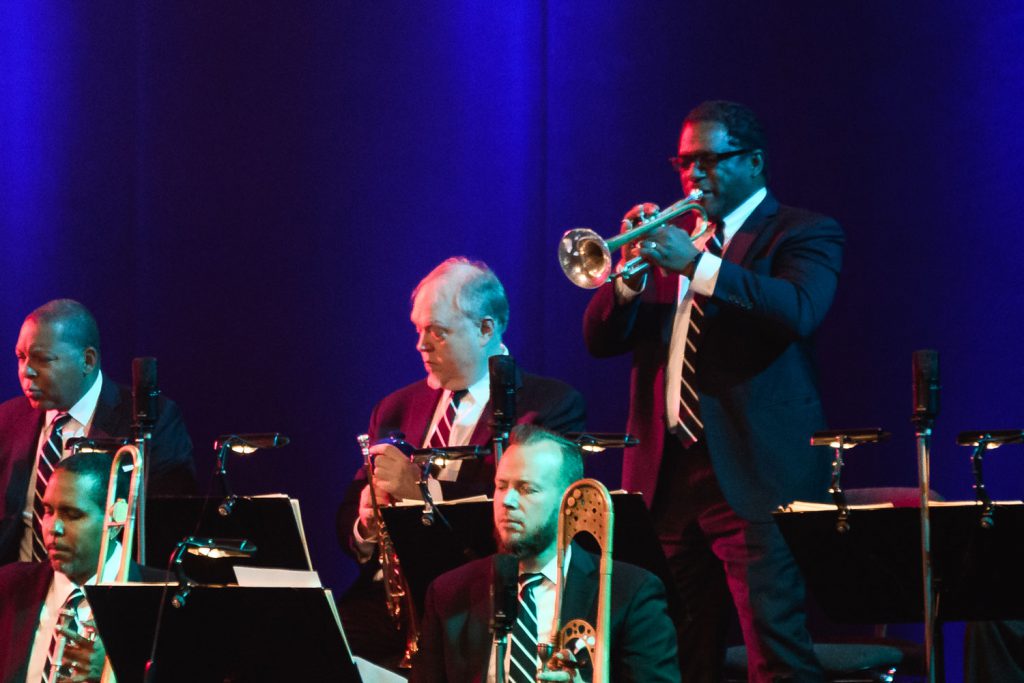 Wynton Marsalis and the Jazz at the Lincoln Center Orchestra

Next to grace the stage was vocalist Sergey Mazaev with an arrangement of the well worn classic “Fly Me To The Moon” followed by an arrangement of “First Snow”. Mazaev is best known in Russia as the vocalist for the late 1980’s rock band Moral Codex. I enjoyed the version of “First Snow” that was one of Moral Codex best know songs. I loved the version of “A Nightingale” from the Spaces Suite performed by the Jazz at the Lincoln Center Orchestra. The ensemble work was amazing and the melody taken on the Alto’s gave me goosebumps.

Perhaps one of my favorite Butman compositions is “Nostalgia” and this piece followed in an arrangement by Vitaly Dolgov. Igor opened this tune with a wonderful saxophone cadenza leading to the songs main theme. Igor then explored the tunes harmony in an exceptional extended solo before giving way to Russian trumpetist Vadim Eilenkrig for equally amazing solo. This performance of “Nostalgia” was without doubt one of the main highlights of the second set. Vocalist Larisa Dolina followed with two songs, “Lady Be Good” performed with the Jazz at the Lincoln Center orchestra and What a Wonderful World” with the Moscow Jazz Orchestra.

Closing out the program was a tribute to Benny Goodman, It’s a shame I don’t speak Russian as Igor’s spoken intro to this provoked both laughter and applause from a fully captivated audience. Nikolay Levinovsky’s arrangement took a medley of Goodman tunes giving both orchestra’s plenty of room to trade choruses and solo’s culminating in a duel drum battle between Oleg Butman (yes’ Igors Brother) with the Moscow Jazz Orchestra and Obed Calvaire from the Jazz at the Lincoln Center Orchestra. 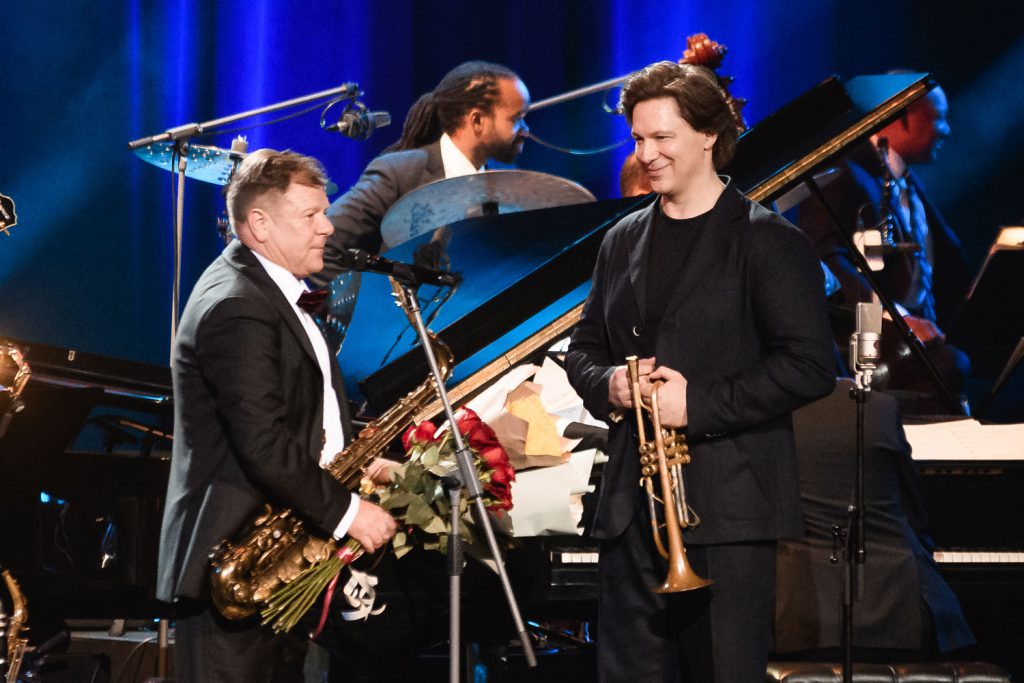 It’s an ambitious idea with many risks to stage a concert like this yet, the crew pulled this off seamlessly. There is no doubt that the Jazz at the Lincoln Center Orchestra is one of the best jazz ensembles on earth and seeing both the JLCO and the Moscow Jazz Orchestra together on the same stage one must conclude the the MJO rightfully deserves to take there place on this esteemed list. I specifically enjoyed hearing these bands trading choruses, it was obvious that both bands were speaking the same language yet with their own unique accent. True musical detante.

So in summing up I struggled to find an expression that accurately describes my experiences in Moscow. Perhaps the best would be to quote the title of Tina Turners major hit and say “It’s simply the best”.