Last week, 9 October, I attended the Mondriaan Jazz Festival in the Dutch city The Hague. As a regular event on the Dutch calendar it was great to see the festival once again present a fully live event to a sold out audience, albeit at 75% of capacity due to the Covid restrictions in the Netherlands. Spread over two venues, within walking distance of each other, the Paard and the Koorenhuis, the festival successfully put together a great international line-up with acts from the USA, Belgium, Germany and Scandinavia performing. It’s worth pointing out that I was particularly impressed to see a predominantly younger audience attending.

Headlining the preceding’s was a concert by Bassist Christian McBride and pianist Jason Moran. The Duo opened the festival with a truly amazing performance on the Main Stage in the Paard. Both McBride and Moran were in top form and presented a great set of mainly standards, none of which played in a standard manner. McBride displayed amazing technique utilizing the full range of the instrument and then some. I particularly enjoyed his use of harmonics, that in almost all cases, rang loud and clear. Considering he was not using his regular instrument, this is even more impressive. Yet, this was not just a display of technique for technique’s sake, McBride was highly melodic in both his basslines and in his solo passages. 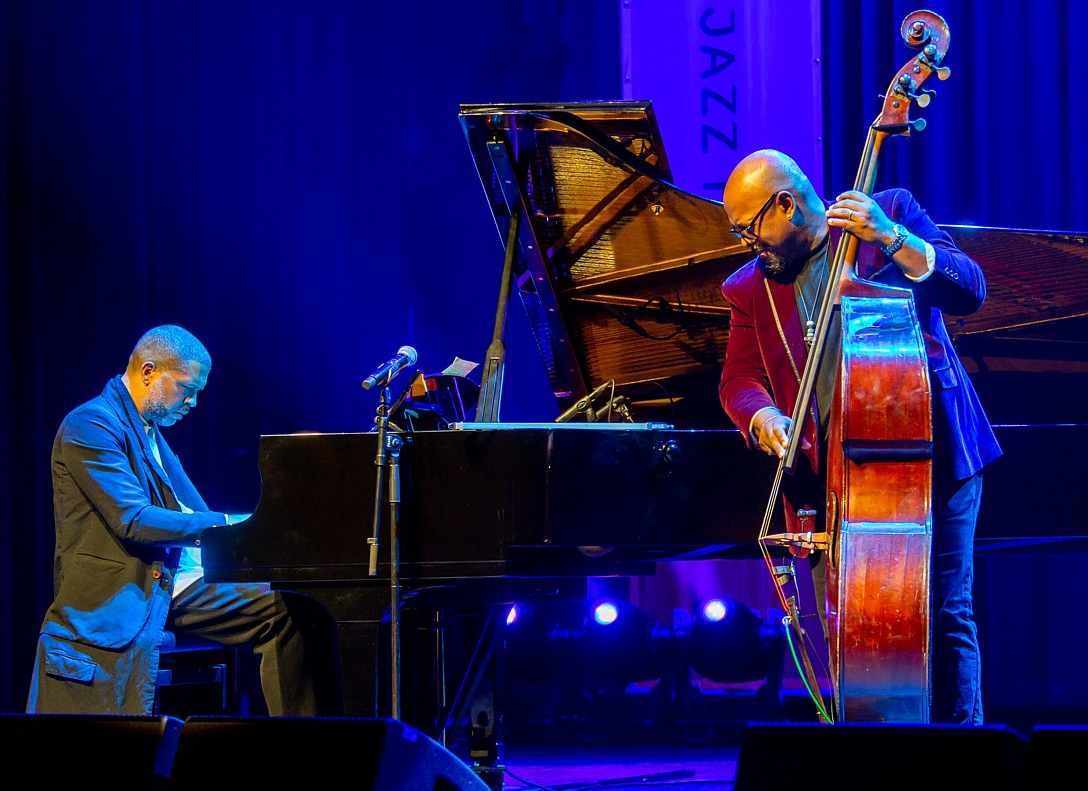 Moran is also known for his highly developed technique and this was also on display as he artfully deconstructed the existing harmony replacing it with his own harmonic vision of the tune. Together these two giant’s of the current jazz scene formed a tight unit that fed off each other for the entire set. The Duo’s version of the Charles Mingus classic, “Goodbye Pork Pie Hat” was quite amazing with McBride and Moran taking this tune, usually performed as a slow blues and superimposing it over a medium up ostinato. Both players performed an extended solo piece displaying their individual command of their instruments. McBride, based his solo on the Benny Golson classic “Wisper not”. As for Morans’ solo, I was unable to determine if this was based on an existing piece or whether it was purely improvised. What ever it was, it was highly impressive. The Duo closed out the set with a lighting version of “Tea for Two”. If you were unable to pick the tune then it’s no crime as the two ripped this well trodden tune to pieces leaving just a smell of the original behind.

Following this I made my way to the second stage to catch the set by the Belgium based band led by guitarist John Ghost. By the time I arrived, the room was full to the brim with only some standing room at the back, not ideal for those of us here in the Netherlands that fall into the category of being vertically challenged. The band delivered a strong set of ethereal and almost cinematic music that was lapped up by the audience. Unfortunately fellow Belgium saxophonist Matthias de Craene was programed in the Paard Cafe at the same time and by the time I dragged myself away from Mr. Ghost I ended up arriving in the café just as the set had just ended. 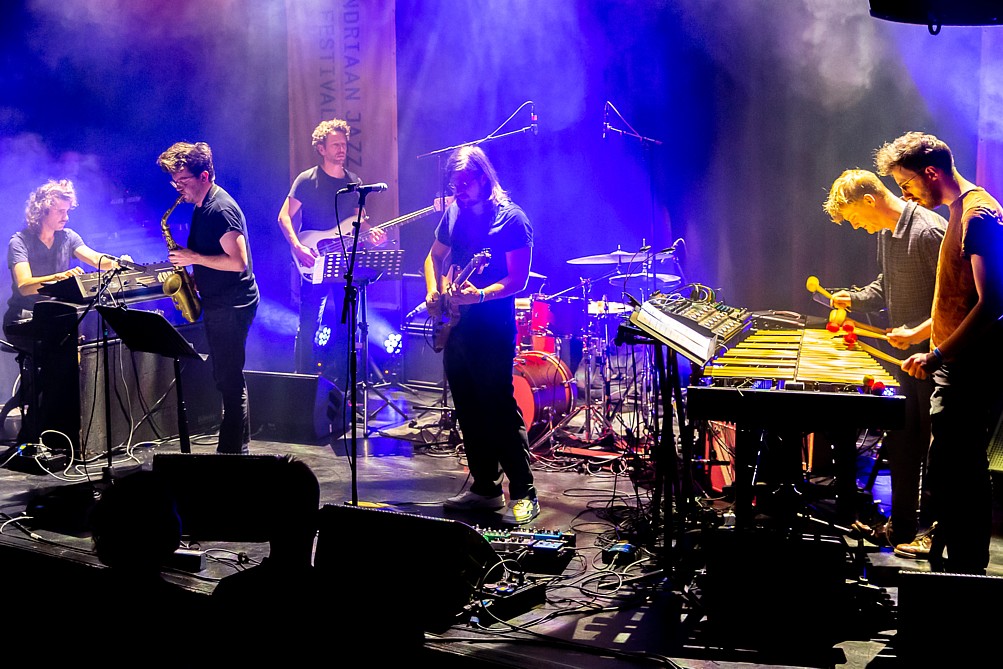 I truly enjoyed the set in the Koorenhuis by Finnish band OK:KO. Led by drummer Okko Saastamoinen the band delivered an amazing set of music anchored in the Scandinavian tradition. Prior to the festival I’d taken the time to check out some of the bands material and remember reading a statement by bassist Mikael Saastamoinen “…in OK:KO, it is just a group meditation whenever we play…”. Having now seen the band live I would agree with this however, this should not be interpreted as meaning esoteric, This was a powerful set full of energy. 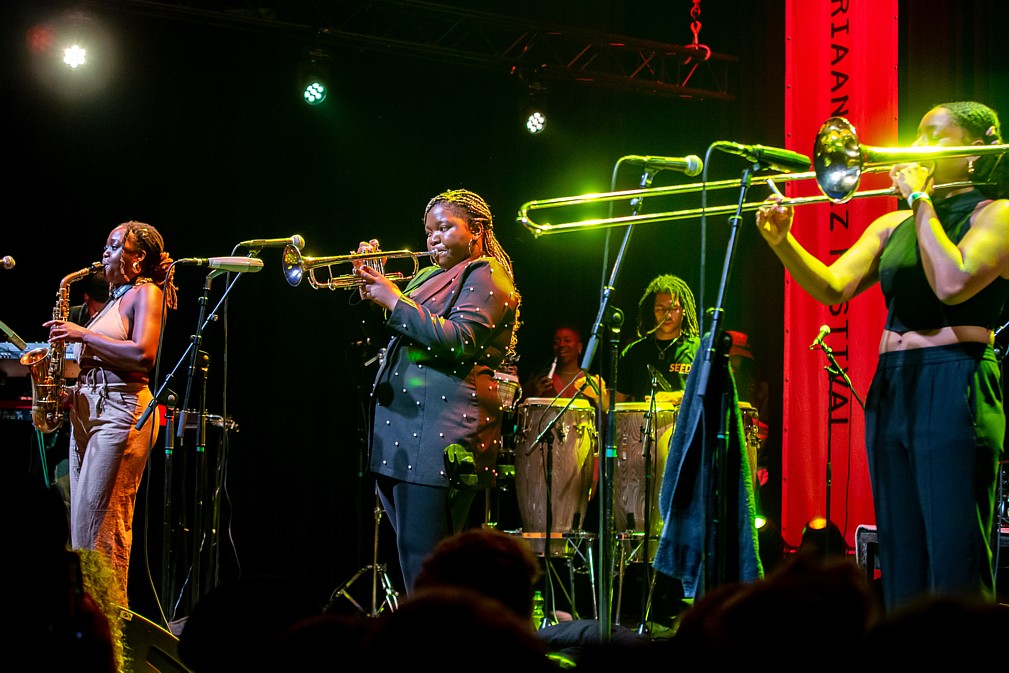 Kokoroko, the London-based eight-piece band led by Sheila Maurice-Grey, closed the performances on the main stage. Being familiar with the bands 2019 EP, also titled Kokoroko, I was looking forward to the set and the band did not disappoint presenting a strong set fusing Jazz and Afrobeat. The band delivered over an hour long journey through current and new material played exceptionally.

Mondriaaan Jazz once again delivered a great evening of varied jazz across many genres all presented in an amazing atmosphere. I’ll be looking forward to next year.