On September 13, the Blue Monday sessions roared back to life with a bang, a bop and a bit of Basie. Four outstanding jazzers hooked up to cut loose for the latest chapter in this long-running series that offers truly improvised live music in an unlikely setting.

This was the first live show in the Blue Note jazz club since Covid-19 regulations were tightened in October 2020. To honor the occasion, three illustrious Swiss musicians made the long journey to north-west Germany. Elmar Frey brought his drums, Christoph Grab came with his tenor sax, and Marcel Thomi schlepped a Hammond organ and a vintage Leslie speaker up 400 miles of autobahn. They joined Axel Fischbacher for one of Europe’s best-kept jazz secrets, the Blue Monday sessions in Hilden, where the players meet a couple of hours before the gig to scribble down a setlist, and then figure out everything else on the bandstand.

It may seem hard to believe the Blue Note regularly attracts top jazz musicians from around the globe. The club is wedged behind a sandwich shop and buried beneath a hotel. A large brick column splits the audience area – although a TV is mounted on the back, showing a real-time feed from the stage. However, the Blue Monday series has wowed concertgoers every two weeks for 15 years. During the pandemic pause, black-and-white photos of past guests were added to its orange walls. “Most clubs hang up pictures of Coltrane or Parker,” said Axel Fischbacher, who organizes the series. “But we like showing the musicians who really fill this room with the best kind of live music – improvised music.”

For the first set, the group snatched up the sheet music from Christoph Grab’s 2018 album of reimagined Count Basie numbers, “Tough Tenor – BASICS”. On every beat of “Ya Gotta Try Harder”, Elmar Frey thumped the drumkit as if he’d just got home to find it wearing his pajamas and sipping the last beer from his fridge. This whipping frenzy catapulted Christoph Grab into a honking, beboppy solo with a bluesy underbelly. Marcel Thomi and Axel Fischbacher then played cleaner lines and fragments of the melody to grab the audience by the shoulders and gently turn them around to face the stage again.

After this display of authority, the band demonstrated their softer side with “Lonely Street”. The sax whispered sweet nothings and Frey’s masterful use of brushes gave the drumskins a chance to heal. For “Basie Straight Ahead”, the Hammond organ got an opportunity to stretch out, Thomi’s bubbling runs and gospel-inflected chords illuminating the club’s shadowy alcoves. Fischbacher then offered a typically spacious solo, leaning back and giving each phrase room to grow. When the guitarist gets hold of a good riff, he squeezes it and teases it until the audience feels damn sorry to say goodbye.

Next up, an elephantine version of “Shiny Stockings” with simultaneous fall-offs from sax and organ that may have traveled through the earth’s core and arrived in Australia by now. Then came “After You’ve Gone”, a fast number that sent Grab into a hoodoo sax-trance from which he never fully reemerged. 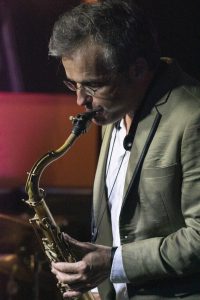 The second half featured compositions from Grab’s recent album “Root Area”. Highlights included “Harlekin”, a soulful ballad driven along by seductive tickles and trickles from the Hammond organ. The song stood out as the moment when the performers finally submerged themselves in the act of wordless story-telling, and it included star turns from all four musicians. To end the night, the album’s title track gave the audience one more kick in the guts and emptied the remaining notes from inside each instrument. The applause lasted a long time. It didn’t last long enough.

“I’m so happy that Blue Mondays are part of our lives again,” Fischbacher said after the concert. “Music needs people – to play it and to hear it. And with improvised music, there’s a deep connection between the audience and the musicians because nobody knows what’s going to happen. We experience it together and it’s always different. I think that’s pretty special.”

The gig in the Blue Note was a fleeting, one-off musical moment. While the specific sounds may fade, the next session is already taking shape. Fischbacher will be joined by a fresh cohort of co-conspirators, including at least one person he’s never met. To see and hear such high-quality live improvisation in such a small club is like discovering a gold-plated Lamborghini stuck behind the couch cushions. Jazz fans will not find a better place to experience this music. The Blue Note may be hidden in Hilden. But it’s not lost.

You can find information about the Blue Monday series here (in German). The albums “Tough Tenor – BASICS” and “Root Area” are available on CD and from selected digital platforms. 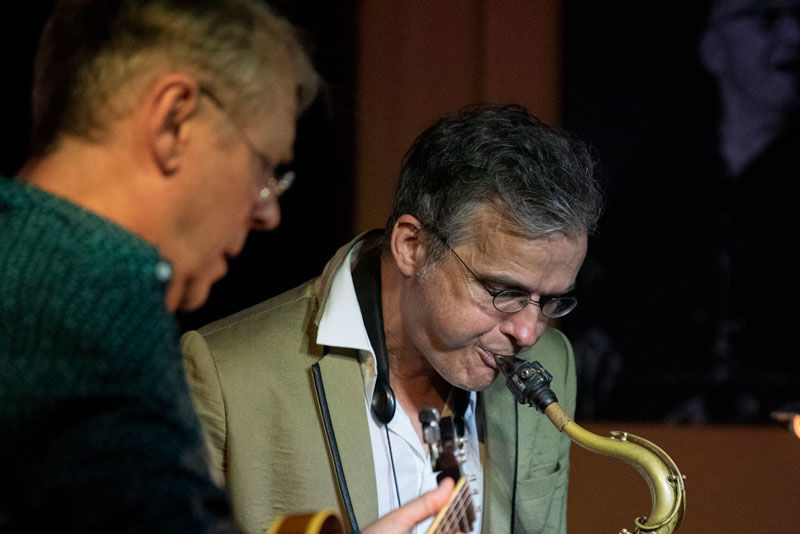