This years Jazz Middelheim in Antwerp is now behind us. From Friday, August 13 to Monday, August 16, there were five performances a day. You were allowed in with proof that you have been vaccinated twice against corona and for the rest, there were no restrictions for the public. Jazz Middelheim 2021 will go down in history as one of the first major events in Belgium in (hopefully) post-corona times.

Festival director Bertrand Flamang: “We have succeeded in making Jazz Middelheim a liberation party that could take place in a safe and responsible way.’’ The 13,500 visitors that attended during the four days will not contradict him. Photographer Maurits van Hout and I strolled in Park Den Brandt for four days.

DAY 1
The road to Park Den Brandt is the same as in previous years. Entering the festival site of Jazz Middelheim is different. Everyone must show that they are corona-proof: the proof of vaccination is scanned and only then can you continue. I pick up my badge and wristband in the press tent, where Greet de Backer has been a hostess for years.

In just a little while Jazz Middelheim starts and I’m ready, my first jazz festival in a year and a half. In the meantime, photographer Maurits van Hout has also arrived and we briefly talk through the day that is to come: five concerts on the main stage. In previous editions there were four concerts and in between music on the small stage. The Club Stage has been cancelled: the only musical knee-jerk event due to corona.

Jazz Middelheim runs for a large part on volunteers, it’s a non-commercial event that is organized by a foundation and the public broadcaster VRT /Klara with the support of the municipality of Antwerp (and many sponsors and the paying public of course). The volunteers can be recognized by their yellow shirts. I compare their work a bit with scouts: you do it with each other, the result is visable and you have fun with each other. Volunteers all wear a mask, as do the catering staff. That seems to be mandatory, however hardly anyone of the public is wearing a mask.

The big tent with the main stage is different than in previous years: many openings to be able to ventilate well, I assume. Rombaux’s store is also present with CDs and LPs are sold there. I avoid that tent, there are always albums that I don’t seem to be able to resist. My CD collection is full of them and I (almost) never listen to them. 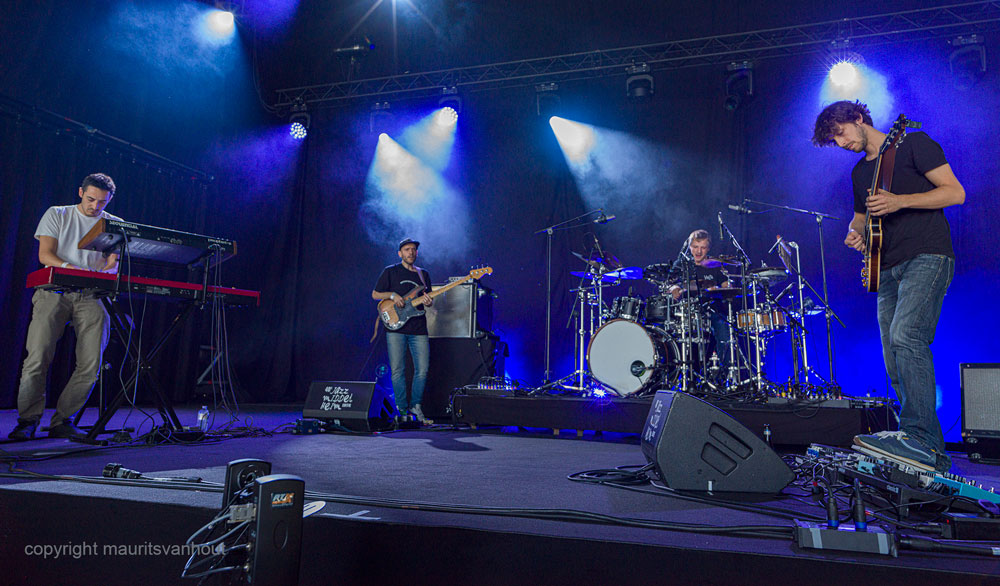 Four Belgian bands play a home game. Lots of electronics at Boombox Experiments, ECHT!, Dans Dans and Stuff. I’ve seen that last group before. They are the crown princes of modern Belgian jazz and they end the first day brilliantly. Dans Dans was contracted shortly before the festival as the British pianist and composer Alfa Mist could not come to Belgium due to travel restrictions, said presenter Lies Steppe (VRT/Klara). Too bad, because the man has built up a nice reputation in England. I’ve looked on the internet and the guy has a message and brings it in his own way. That said, Dans Dans was a great replacement.

Portico from England did not suffer from travel restrictions and were there along with a good dose of electronics and a band member (Jack Wyllie) who plays soprano sax (he combines this with keyboards). I note: a “classic” wind instrument in the fourth concert. There are jazz festivals where that happens to you earlier.

DAY 2
I’m not starting the day well, I forgot my earplugs. After the first concert I am able to score a set for free on the festival site. As of today, the big tent is full of chairs, yesterday you had to stand and that’s exhausting when five concerts in a row are played. At the end of this day I also concluded: sitting for five concerts in 10 hours is also too much of a good thing.

The Belgian pianist and composer Kris Defoort had invited two Dutch friends, trombonist Wolter Wierbos and drummer Han Bennink, two veterans from the famous Instant Composers Pool. Every now and then there is the usual clowning around from Han Bennink, but there are also passionate solos by the pianist and trombonist. Han Bennink’s driving drumming style always remains delightful, the avant-garde of the last century now sounds like mainstream among the modern electronic violence, I read in my notes. 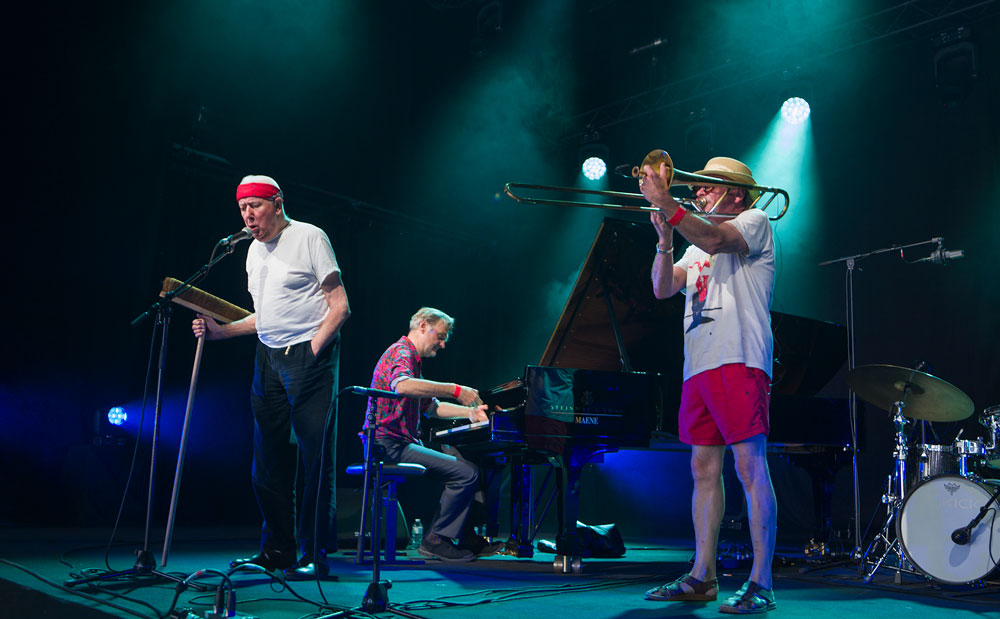 Earlier, I noticed the young Belgian drummer and composer Samuel Ber in two short concerts. First concert was with the Danish saxophonist Lotte Anker, the American cellist Daniel Levin and the Belgian double bass player Soet Kempeneer. It was subdued music, that was followed by thunderous playing by tenor saxophonist Tony Malaby and keyboard wizard Jozef Dumoulin in the second concert. 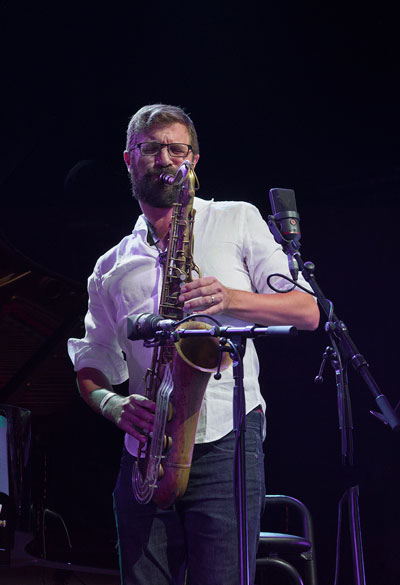 In the fourth concert of the day I heard the most beautiful solo. Tenor saxophonist Robin Verheyen played a fantastic performance of the standard “You go to my head”, It became quiet in the tent during the performance by the Belgian saxophonist, everyone felt that this was something very special. Pianist Bram De Looze and drummer Joey Baron are Robin Verheyen’s colleagues and their group is called MixMonk, because they share the love for the music of Thelonious Monk. Over the years it has become a super trio and the joy just splashes from the stage.

Saxophonist John Zorn, all-rounder Laurie Andersen and drummer Laura Palmer closed off day 2. Bassist Bill Laswell was meant to have come to Belgium, but unfortunately he fell ill so Laura Palmer came along from the US as his replacement. John Zorn was typically John Zorn. A leg resting on a chair and playing fiery and directing his colleagues, Laurie Anderson (violin, electronics, voice) and Laura Palmer. At times it is meditative, often it is fireworks. Innovation can also stagnate, is my conclusion. Photographers are still not welcome when John Zorn is on stage.

DAY 3
Today there is a lot to look forward to, especially the performance of the Italian saxophonist Stefano di Battista and voice artist Youn Sun Nah. It is also the day of the oud, the stringed instrument (lute) that is popular in large parts of the world. The Belgian saxophonist and clarinetist Toine Thys has started the project Overseas “Tamam Morning” together with the Egyptian oud-player Ihab Radwan. Together with percussionist Ze Luis Nascimento (Brazil) and cellist Annemie Osbourne (Luxembourg) they merged classical and world music. In addition, pianist Harmen Fraanje (The Netherlands) plays romantic tones as a guest musician with the quartet.