I recently interviewed saxophonist, composer, vocalist, radio show host and writer Kim Cypher to talk about her upcoming debut at Ronnie Scott’s in ‘Kim Cypher: Catching Dreams’. A milestone moment for her and the cause of much excitement, not just for her but for her supporters. Kim explained ‘Performing at Ronnie Scott’s has been a dream of mine and my husband’s for as long as I can remember. To walk in the footsteps of incredible jazz legends and to perform on stage at this iconic venue is just mind-blowing. Musicians who perform there are ‘guardians’ of the club’s reputation and continuation of that incredible dream to present the world’s best jazz. There can be no greater honour!’

I was fortunate enough to attend Kim’s debut performance at Ronnie Scott’s and unsurprisingly, it was a lunchtime to remember and for all the right reasons. The club was packed, as it always is, but there seemed to be a special, slightly different buzz about the place this time. Something warming and comforting. I couldn’t quite place what this was for a while, but then I realised that the crowd was full of Kim Cypher supporters and fans, many of whom had travelled down from Cheltenham on a coach, and that this was their first time at Ronnie Scott’s. The love and joy people feel for Kim has never been more evident that during this gig.

One of the many wonderful qualities about Kim, is that she makes you feel at home. Comfortable but not in a pipe and slippers way, she does it in a warm, welcoming and honest way. You feel at ease, able to be yourself, ready to just sit back and enjoy some great entertainment. The banter with her husband, drummer Mike Cypher is brilliant and throughout the gig we were treated to some beautiful and hilarious anecdotes and insights into the life of these two wonderful musicians from Mike’s brand-new trousers to Kim’s custom-made glittery glasses. It makes you wonder why they are not on television with the Kim and Mike show. It would go down a storm. 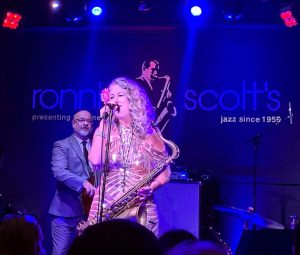 Kim brought her beautiful unique style and energy to her Ronnie’s performance with her ‘cheeky numbers’ and her signature flower in her hair. Joining Kim, as well as husband Mike Cypher on drums, were Mike Green on bass, Chris Cobbson on guitar and Anders Olinder playing Ronnie’s gorgeous Yamaha CF6 grand piano. Superbly tight and assured performances from these stellar musicians and each musician had many moments to shine and share in the energy and excitement. Kim’s set choices were carefully selected with the audience in mind and the connection was immediate. Her rendition of Peggy Lee’s classic ‘I Love Being Here with You’ had a little bit of extra magic and seemed especially heartfelt. You shared in her joy of making her debut at Ronnie Scott’s and realised that she really did love being there.

On an incredibly rare occurrence, the audience were allowed to take photos, which is normally strictly forbidden at Ronnie’s with only their official photographers allowed to capture the artists, which they do so beautifully (special shout out to Carl Hyde and Monika S Jakubowska for their stunning work). This did lead to a wonderful outpouring of love and comments on social media during and after the event, with the audience sharing their thoughts along with some great photos and their clear enjoyment of the show.

Kim finished her performance with a song from her ‘Love Kim x’ album written by Chris Cobbson, ‘A Time to Reflect, A Time to Forget’. A perfect ending to a wonderful show. For a brief time, we were able to forget about everything, reflect on how fortunate we all were for being able to sit at Ronnie Scott’s captivated by a fantastic artist. Kim truly sparkled throughout the gig. From her dress and custom-made glasses to every note she played and sang. And by the end of the show, the audience were all sparkling too. 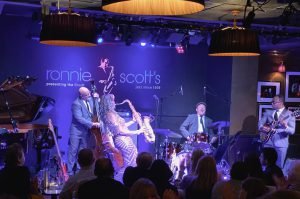