Astor Piazzolla was born a hundred years ago. The Argentine bandoneon player and composer has ensured that tango occupies a prominent place in the contemporary music world. Like flamenco, this Argentinian music exudes passion and more passion, however, Piazzolla is not the only Argentinian to have shaped modern tango music in the 50’s and 60’s of the last century. 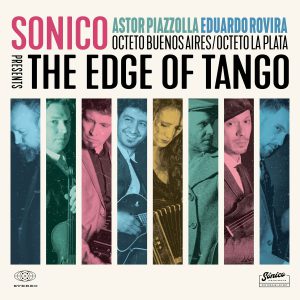 Astor Piazzolla (1921-1992) and Eduardo Rovira (1925-1980) are the two composers who modernized tango: tango nuevo. Piazzolla incorporated jazz influences into his music while Rovira added elements from classical music. The ensemble Sonico honors these grandmasters with a double album: ‘Piazzolla-Rovira: The Edge of Tango’.

Sonico is considered a Belgian ensemble, but it is in fact an octet in which musicians from all over the world. Leader and bassist Ariel Eberstein lives in Belgium, but was born in Argentina. The rest of the ensemble members come from Italy, America, France, Belgium and Argentina so the lineup is as global as tango has become.

Sonico was founded in 2015 with the aim of promoting the music of Eduardo Rovira. In August 2018, the first album, “Eduardo Rovira: La Otra Vanguardia”, was presented in Buenos Aires. In 2019, a second album was released: “Eduardo Rovira: Inédito e Inconcluso” that included lessor known works from the composer. The new double album will be released in September.

The celebration of this Astor Piazzolla year was reason enough for Sonico to honor the Argentinian and his co-innovator of tango, Eduaro Rovira. Last March Sonico played the repertoire of ‘Piazzolla-Rovira: The Edge of Tango’ at a major festival in Belgium. The TV registration became the festival’s most watched program. 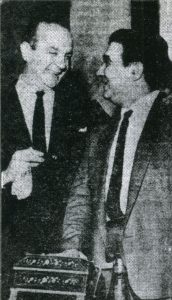 The double album contains eight compositions or arrangements by both grandmasters, that makes 16 in total, of which 4 have not published before.. “It is still a matter of debate which of these two composers modernized the tango first”, says Sonico founder and double bassist Ariel Eberstein. That was the starting point to immortalize the music of Astor Piazzolla’s legendary Octeto Buenos Aires and Eduardo Rovira and his Octeto La Plata.

The music on the double CD also has historical value as a number of scores that appeared to have been lost to fire and flooding have re-surfaced. “We made enormous efforts to find some of the scores”, says Eberstein. The research work for this 3rd Sonico album not only recovers previously recorded (but lost) repertoire, but also four unreleased pieces. After more than 60 years, Sonico wants to breathe new life into this music with the release of its 3rd album on September 17th.

The octet’s work has not gone unnoticed in Argentina either. Sonico has been hailed by the Argentine press as “the savior of tango nuevo” or avant-garde tango. The renowned music magazines Billboard and Rolling Stone consider Sonico to be one of the ten most important tango ensembles in the world based on the first two albums and concerts in South America. The new album confirms Sonico’s status without any doubt.