Last week New York based label Smoke Sessions released The Magic of Now, Orrin Evans’ sixth leader album for the label, and the 20th of the 46-year-old pianist-composer’s luminous career. Recorded in the midst of the upheavals set in motion by the COVID-19 pandemic, this latest recording of Evans’ kaleidoscopic artistic journey coincides with several self-generated sea changes in his life. During the last 12 months Orin and his wife made a number of life changing moves including Evans decision to end his three-year association with the popular piano trio The Bad Plus to focus on musical projects under his own name. 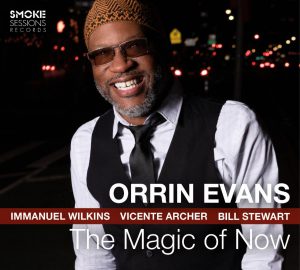 “People have had to make adjustments and be reborn to a certain extent,” Evans says by way of explaining the title. “We’re past the point where we didn’t know what was going on or what the future would look like. Now we’re settling into what our ‘new normal’ will be, embracing the magic of now and the shape of what will happen next.”

The Magic of Now was recorded at SMOKE during the second weekend of December 2020 by Evans and a multi-generational cohort of A-list partners – first-call New York bassist Vicente Archer; iconic drummer Bill Stewart; and the dynamic 23-year-old alto saxophonist Immanuel Wilkins. They generate an eight-piece program that exemplifies state-of-the-art modern jazz, including three tunes apiece by the leader and Wilkins (whose 2020 Blue Note debut, Omega, was named “Best Debut Jazz Recording of 2020” by NPR Music and number-one jazz recording of 2020 by the New York Times). From the first note to the last, the quartet, convening as a unit for the first time, displays the cohesion and creative confidence of old friends.

Actually, “old friends” is a precise descriptor for the protagonists. “This album is a reunion,” explains Evans, who met Archer when both moved to New York City during the mid-1990s. He began playing frequently with Stewart when saxophone titan Steve Wilson hired both to play in his Wilsonian Grain quartet in 2008. In 2013, he played “big fun” trio gigs with Archer and Stewart at the Litchfield Jazz Festival and the Detroit Jazz Festival, and used Stewart on his 2014 Smoke Session album Liberation Blues.

“I knew Immanuel as a performer and a saxophonist, but not as a composer until I played some of his pieces during that series,” Evans says. “I loved the compositions, how he treated them within a set, and how he put everything together. Playing other people’s music inspires me.”

Producer Paul Stache, who’d personally experienced the Evans-Wilkins simpatico during a Wilkins-led livestream at Smoke last August, suggested the matchup. “I’d wanted to do more with Vicente and Bill after 2013, but they ended up playing with Nicholas Payton for a few years and I couldn’t figure out a way to put it back together,” Evans says. “By happenstance, we were all at home during the pandemic.”

“I love Vicente’s fearlessness,” says Evans, himself known for applying a “kamikaze” attitude to jazz expression since he began leading groups in his late teens. “He learns the music and then adds so much to the conversation by playing harmonic and rhythmic ideas you might not have thought of. And I love the way that Bill’s drums sound – his cymbal choices, the way he tunes his bass drum and snare drum.”

As for Wilkins, Evans appreciates his lovely tone throughout the alto’s registral range; his command of a broad swath of jazz lineage; his “ability to bring music to the table and let it breathe, allowing myself, Vicente and Bill to bring something to it totally different than what his band would do.” When asked about his ongoing relationship with the albums producer Paul Stache evens stated “I love the sound of the piano and drums on this record – and I love the sound at Smoke, I love the energy – so close, so intimate. And I appreciate having a long-standing relationship with Paul Stache that’s built on mutual respect. That has a lot to do with how much I enjoy playing music there.”

The Magic of Now was recorded at SMOKE, NYC on December 11-12, 2020 and mastered to ½” analog tape using a Studer mastering deck bring back that classic analogue sound. The album is available on all streaming platforms as well as on CD and Vinyl LP. For those interested you can check out the lead track from the album on our “New Release” Spotify playlist.

For our US East Coast readers you can catch Orin live from the 29th through to the 31st of July at the Iconic New York club Birdland and then from the 27th through to the 29th of August at the South jazz club in Philadelphia. Joining Orin in Philly will be special guest Jazzmeia Horn.