Lil Hardin: A Pillar in the Rear View Mirror

As a woman in jazz, I have wondered so many times, why we just don’t seem to talk about and celebrate the contributions of women in jazz in the same way we celebrate the men. The women who have contributed so much to the music and musicians we admire simply seem not to feature in our day to day discussions about our favourite genre of music.

Like many of you, over the years, I have had countless wonderful and inspiring conversations during gig breaks, about so many wonderful musicians we just love; however, I have yet, in thirty plus years as a woman in jazz, to have had that gig break conversation about female jazz contributors who are not singers.   There are women that have had a heavy influence on the jazz songs or household jazz names we quite rightly respect and hold in such high regard.

In this article, I want to discuss one of the world’s favourite jazz musicians; Louis Armstrong.  Louis Armstrong was a formidable talent who had a playing style that had such incredible depth and warmth. He also had a fabulous engaging personality that complimented his talent, almost like strawberries and cream. Watching him play, either performing a concert or in film, you simply cannot separate his wonderful playing from his sparkling infectious personality.  So much so, that his music/recordings have become a deeply embedded part of the recognisable songs that form the colourful tapestry of music that just coats our lives in richness.  Not only for jazz fans, but also for people who are young, old, and those somewhere in-between.  Louis Armstrong also appeals to people who may not perhaps call themselves jazz fans, but his music creates that irresistible warm comfortable delicious feeling of familiarity, love and admiration.

Isn’t it simply incredible then, that so many people are not aware that the person that gave Louis Armstrong his first serious break was a woman? That woman was Lil Hardin. 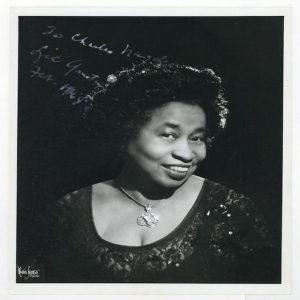 Lil Hardin was born on February 3, 1898, in Memphis, Tennessee. She was formally trained in music at Fisk University at the Chicago College of Music, earned a teachers certificate in 1924 and went on to the New York College of Music and earned a diploma in 1929.  Her professional career in music began at Jones’s Music store as a ‘song-plugger’.  This is where she apparently learned so much that she was dubbed  “The Jazz Wonder Child”.   Whilst there, she met Jelly Roll Morton.  Some would say that is also where Lil Hardin gained her heavy-handed rhythmic, aggressive piano style trade mark.

Lil Hardin and Louis Armstrong met in 1922 when he became a member of the King Oliver’s famed Creole Jazz Band, with Lil Hardin at the helm on piano. She was not only a pianist but also a composer, arranger and a bandleader.  Her compositions are not unknown, for example, “Just for a Thrill”, (a hit revived by the incredible Ray Charles in 19595 for Atlantic records) .  This song has an incredible level of colour, texture and shading.  Once heard, this song can never be forgotten.  So why do we not know about Lil Hardin in quite the same way we know about Louis Armstrong?  Has her contribution to his career been down played?.  I think it has.

The Original New Orleans Creole Jazz Band played in a pure, swinging New Orleans style and was quite successful. The audience frequently contained some of the leading musicians and stars of the day, including Bill “Bojangles” Robinson, the vaudeville team of Walker and Williams, Eddie Cantor, Al Jolson, and Sophie Tucker.  King Oliver and Johnny Dodds came over one evening to hear the band and invited Armstrong to join their band (King Oliver’s Creole Jazz Band).  In 1922, Louis Armstrong joined him, and the full complement of Oliver’s band then included Oliver and Louis Armstrong on cornets, Honoré Dutrey on trombone, Johnny Dodds on clarinet, Baby Dodds on drums, Bill Johnson on banjo, and Armstrong on piano. This band, of course, has become one of the most famous in all of jazz history and formed the nucleus for Louis Armstrong’s Hot Five and Hot Seven recording sessions.

Lil Hardin helped Louis learn classical music and helped him to recognise that his talent was far stronger than Oliver’s, the man he admired so much. Eventually Louis resigned from the King Oliver band in September 1924. When Lil Hardin got a gig at the Dreamland Cafe in Chicago, she pushed forward for Armstrong,  and had a massive banner made that said “The World’s Greatest Trumpet Player”.

It was Lil Hardin in 1925 that encouraged Louis Armstrong to show just how powerful his playing and band leadership qualities were.  In 1925,  he recorded “Hotter Than That”  with The Hot Five; Louis Armstrong on Trumpet, Lil’ Hardin Armstrong on piano, Kid Ory on trombone, Johnny Dodds on clarinet and Johnny St. Cyr on banjo.  . “Hotter Than That” was composed by Lil’ Hardin and featured Louis Armstrong on cornet and vocals.  A very New Orleans jazz instrumentation with Louis Armstrong playing solo passages where the improvisation provided the structure for their style,  and where they were able to deliver the most influence in the genre at that time.  Some said the note choices he made and the Louis phrasing were revolutionary at the time.

Without wanting to send you all to the classroom, what the above research has shown is that the magnificent contribution of Lil Hardin to the career of Louis Armstrong is simply not celebrated and it should be. 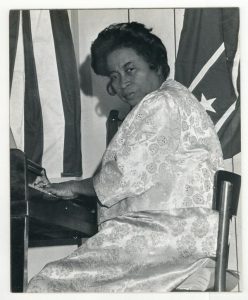 After 31 years in this business, not one of my favourite jazz musicians (some of whom are very successful and rightly so) has ever mentioned Lil Hardin.  I may be along in finding that odd, but I suspect not.  That is not necessarily their fault.  What it does show is that ‘we’ as Women in Jazz have to update the conversation.  It does not need to be a political statement, push, or any other politically driven motive, it simply should exist.  As women we too need to educate ourselves in terms of the female influence in jazz, what did we change?, how did we influence?, where did we influence?, who did we influence?, and wake up that conversation to a much more interesting and inclusive level.

It has to be said however, that some of those meaningful conversations I have had with other jazz musicians and singers over the years about the Jazzers we admire, where jazz contributors such as Lil Hardin are never discussed, come from both genders.  So the education required in terms of highlighting the contributions of women in jazz is not aimed at just men, absolutely not.  We are all guilty of just going with the flow and doing what we think we should.

As women in jazz we need to contribute and colour those wonderful discussions on jazz in such a way as to highlight where we as women are important.  Not more than men, but as much as men.