For two decades, the shadow of The Real Tuesday Weld has stalked London – and the world. The band, led by Gainsbourgian troubadour Stephen Coates, has released six albums to date and is now bidding a final adieu – in style. In short: it is time to face the music and dance. With their final releases, the long-time London-based cabaret noir outfit have opted for mediums that force you to sit down and listen. Here lies a swan song collection you do not get to cherry pick: the end is fickle, unpredictable, and yet, predetermined. 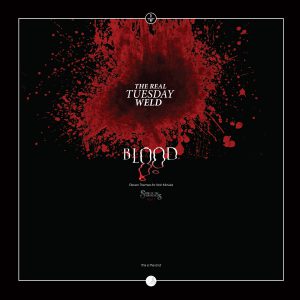 ‘Blood’, the first of the final Swan Song series consists of ten songs for noir movies that never made the screen: they exist only in the listener’s mind. Where previous releases featured Coates’ alter ego The Crooner, these compositions instead revolve around their own protagonists. Starting with Blood Knuckled and Dusted featuring French songstress Oriana Curls, Blood instantly tempts the listener to go on a filmic journey. Especially those who have enjoyed cinematographic experiences the likes of Twin Peaks and Angel Heart will find it easy to get carried away into the world The Real Tuesday Weld has so carefully crafted – on this album as well as over the last two decades. However, through antiheroes and broken hearts, the band has not lost its sense of humor: Blood includes a deranged, but charming version of Lady Gaga’s monster hit Poker Face.

Bonus cassette Tape Dust Memories, available to the first 100 lucky fossors who get Blood on their hands, tempts you to identify with the feelings of tall dark strangers, whether they are broken hearted, lost in thought or lamenting their career path as a noir-era hitman. The Real Tuesday Weld turns every song into a thought experiment: What does this mean? And, in line with the fifth song on its vinyl counterpart: What Happens Next?

Coates himself is no stranger to getting lost in his thoughts. The band’s discography is, if anything, an anthology of his dreams in the broadest sense of the word; its very name derived from a dream the bandleader had about the 50s movie star. This dream came to him the night after he had spent an evening in the sewers of Clerkenwell, exploring the subterranean river Fleet: befitting to the Walter Mitty of Noir, the lost rivers of London had fascinated him for a while and one night, he decided to lie his way into the pipes. When he emerged it was dark, and raining in Clerkenwell. Coates went home deeply touched by his experiences and wrote I Love The Rain, which is still one of the band’s most successful songs today. Upon hearing it, my own thoughts and dreams still take me back to London’s Union Chapel, 2015, where I experienced quite a brilliant live execution of it. I’m not sure if opening an umbrella in a church is bad luck, but perhaps we jinxed The Real Tuesday Weld’s untimely death. Who can say.

Whilst mourning the end is of course part of every obituary, all grief is rooted in an appreciation of life. Thus, it is worth exploring how Coates took on the Tuesday Weld persona as a band. After composing I Love The Rain, the lifelong Cincinatti Kid-fan dreamed about the actress and took it as a sign for something bigger. As literally referring to himself as Tuesday Weld, understandably, became a bit confusing as the actual Mrs. Weld remains very much alive to this day, The Real Tuesday Weld was born, and I Love The Rain was released under that moniker. The small, appropriately named label Dreamy Records asked The Real Tuesday Weld to release an EP after hearing its debut song and the resulting Valentine’s EP – Songs of Love would be the start of an unconventional life on the fringe that would last over two decades. I Love The Rain did well – really well, for a brand new band that nobody had heard about and with but a few shows under their belt. The outfit was picked up by the prestigious PIAS Recordings and, subsequently, had to release their first album. 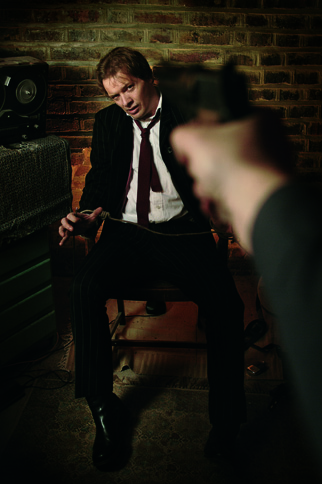 Coates lived together with long time friend Glen Duncan at the time, a novelist who was about to finish his novel I, Lucifer. The attentive reader will sense where this story goes: The Real Tuesday Weld’s first full album release became a soundtrack to what was essentially the devil’s biography. This album was previously released by Dreamy Records, but would now include the track (Terminally) Ambivalent Over You. The thing about labels, though, is that they expect you to put on a show – or, at the very least, show some enthusiasm toward the concept of world domination. And Coates had never performed live. The thing about shows, then, is that there might be a tall dark stranger in the crowd with an offer you can’t refuse. So when Coates got off stage at obscure London arts venue The Horse Hospital and was asked to perform again, his initial response was a very firm ‘no’.. Until he heard the club was based in Athens, Greece. Even the darkest of souls won’t be able to resist a paid trip to a sunny metropolis. Upon his return from Athens, pleased about this accidental effort at musical cosmopolitanism, Coates received yet another invitation: this time, The Real Tuesday Weld would go to New York. Suddenly, the man who started out with a sampler, a gramophone and bits, bobs and pieces was touring the world.

When we spoke, Coates told me that an email can change your life. I was curious; after all, our shared fascination for all things noir commands an interest in sudden plot twists. The story did not disappoint. I, Lucifer, the soundtrack to Duncan’s novel which was released on PIAS, had included single (Terminally) Ambivalent Over You. The song became the subject of an animation created by Alex Budovsky, a Russian-American artist who messaged Coates asking if it was ‘ok to have created it in the first place’. Of course it was: one form of creativity inspired another and one video turned into a series: Bathtime in Clerkenwell and Last Time in Clerkenwell tell the story of a Royal Legion of Birds – and their eventual demise. The Bathtime in Clerkenwell video became one of the band’s most popular videos to date and won an impressive amount of international prizes at animation festivals. The series also introduced The Real Tuesday Weld to Russian audiences, who have since had a taste for Coates’ melodic flirts with the apocalypse. Me And Mr Wolf, the most successful animation to date, has been viewed over a half million times and is an entertainingly deranged story about Little Red Riding Hood and the Big Bad Wolf going rogue. It does not end well:

Hiding in the shadows and poised on the brink of international obscurity, Coates spent a lot of time being shy about playing live. On that fateful night at The Horse Hospital, Duncan read his pieces, Coates played three or four songs, and the duo showed some animations. That was that.. Or so we thought. As we now know, the rest is history. A history that forced a reluctant one-man band to spread his whispers and lend his voice to another novel by his friend, as The Last Werewolf saw the light of day a decade ago.

Arguably, Duncan’s books gave The Real Tuesday Weld a refined set of initial characters to relate to and write about. These sounds of muffled 30’s jazz, a fertile breeding ground for what we would, later on, consider electro-swing, were rarely about real people in the end and much rather about the power of imagination, and cheerful ponderings about the inevitable demise of the antiheroes in our dreams. For the blockbuster game LA Noire, for example, Torch Song was written about the main character; a heroin addict, who might very well be a pyromaniac.

Whether they are scheming arson or not, strong women with fiery personalities have always been prominent to The Real Tuesday Weld. Past collaborations include, for example, The Puppini Sisters, resulting in the charming single Don’t Get High No More. An unusually playful hum for a group of noir experimentalists, where The Real Tuesday Weld usually derives its beauty from tragedy. The accompanying video suggests that liquor was not exactly the only poison of choice to The Crooner. Perhaps, the first steps towards teetotalling led her down the path of her eventual demise. Coates’ animated alter ego, The Crooner, visibly floated between heaven and hell in 2019 already, after all..

The first video for Blood gives us another clue toward The Real Tuesday Weld’s untimely expiration, actually, as another femme fatale enters the stage. Investigate the crime scene below.

‘A film in every song’ is Coates’ motto, and when we last spoke, even he wasn’t sure who would kill The Real Tuesday Weld – but the end, we agreed, was nigh. Since then, it has become clear that Blood, and its successors Dreams and Bone will accompany us on our journey, or perhaps, are the journey to The Real Tuesday Weld’s death bed. Nobody should make such a journey alone, so the three vinyls are each accompanied by bonus cassettes: equally inexorable carriers of sound indeed. We will experience the stages of decomposition in full, whether we like it or not.

We start with Blood, as we know and while each album contains a mix of jazz sounds, cinematic experiences and electronics, this one seems most heavily focused on the strength of sirens. Much like the LA Noire soundtrack and indeed featuring a revisitation of arsonist ode Torch Song, it is a collection that inspired my inner femme fatale and that will continue to feed her in her time of need.

From roaring lionesses, Dreams moves on to silent whispers, it seems; rumor has it that the second phase of our journey will be more electronica-focused. A cinematic experience, much like The Real Tuesday Weld’s own dreams. The actual Mrs. Weld, of course is still very much alive; I wonder how she feels about the alter ego bidding her final farewell? Coates has received charmingly odd fan mail addressed to the wrong Weld before. Now that we find ourselves neck deep in an ongoing murder mystery, perhaps the double life of this retired actress will pinpoint us in the direction of its malefactor?

Bone, the final collection of swan songs in this series, embodies the skeletonization of The Real Tuesday Weld. Ashes to ashes, dust to dust, we are to expect a full circle album full of the old jazz influences The Real Tuesday Weld loved so much, finishing off by taking the whole discography around again. We will remain captivated by this conundrum for another year and a half, until it unravels in a final animation. For now, Blood and Tape Dust Memories make for delightful clues to be studied thoroughly until the next riddle presents itself. Ready yourselves for a final twirl.