As a passionate and dedicated jazz musician married to a drummer, I welcomed the opportunity to celebrate the tenth International Jazz Day by delving deeper into the world of a drummer I have followed for many years and for whom I have the greatest respect and admiration. Her achievements speak for themselves and are great testament to her ability and wide-ranging drumming styles together with an easy-going approach to her work.

From early days performing on the Bristol jazz scene, to recording the original soundtrack for Peaky Blinders with recording project Feverist, forming alternative genre band Mesadorm with a group of friends, designing and performing drum clinics based around playing ‘grooves’ and performing world tours with the likes of Paloma Faith and Goldfrapp, the world of drummer Daisy Palmer is fascinating, inspiring, full of variety and all centred around family life.

So, let’s find out more about Daisy Palmer…

I first saw Daisy perform many years ago when our paths crossed working on the Bristol jazz scene, of which Daisy has been very much an integral part of, performing with the likes of Andy Sheppard, Pee Wee Ellis and Get the Blessing. In those early days it became clear that Daisy was going to become a highly sought-after drummer. Most recently I saw her incredible performance as part of Denny Ilett’s Electric Lady Big Band live streamed from Ronnie Scott’s. My attention is always drawn to her energetic drumming style and her captivating, positive presence on stage. I admire her ability to command a central focus but without becoming an overpowering distraction, no mean feat indeed.

Daisy started her musical career as a trumpeter in the Kingston Youth Concert Band in Greater London where her passion for the drums all started.

DP: The fascination for me began when I played trumpet (my first instrument) in Kingston and New Malden Scout and Guide band as a 10 year old. This was a marching band so the percussion section just looked like so much fun and I was obsessed with the idea of trying it. I wasn’t able to move to percussion in that band as I was too little, but when I started at Kingston Youth Concert Band a few years later, I was able to join the Percussion section gaining access to timpani, aux percussion and drum set, going onto inheriting the drum set chair in the Kingston Youth Big Band a year after that. It’s fair to say that I was hooked on hitting things from then on, helped along by my parents and Granny Sylvia, who bought me an old Olympic acoustic kick, snare and hats plus a Yamaha DTX electronic drum kit to pulverise at home.

Daisy spread her wings in 2010 with a world tour with Goldfrapp and has since toured with the likes of Paloma Faith, Rae Morris, MIKA, Barry Adamson, Hannah Peel, Beth Gibbons, John Metcalfe, Beth Orton, Pepe Belmonte, Mesadorm and Bellatrix.

I asked Daisy to tell me more about her tours with Goldfrapp and Paloma Faith.

DP: Both artists are lovely and incredibly fun to tour with. The ‘Head First’ tour with Goldfrapp in 2010 was my first world tour and so I learnt a lot on the job regarding using electronics within a hybrid set up and generally how to behave on tour. I joined Paloma’s band in 2017 and, as she tours mainly in the U.K, it’s been closer to home and easier to manage doing other gigs in between. Paloma’s band is like a family, so I was welcomed in with open arms and felt like I belonged immediately. 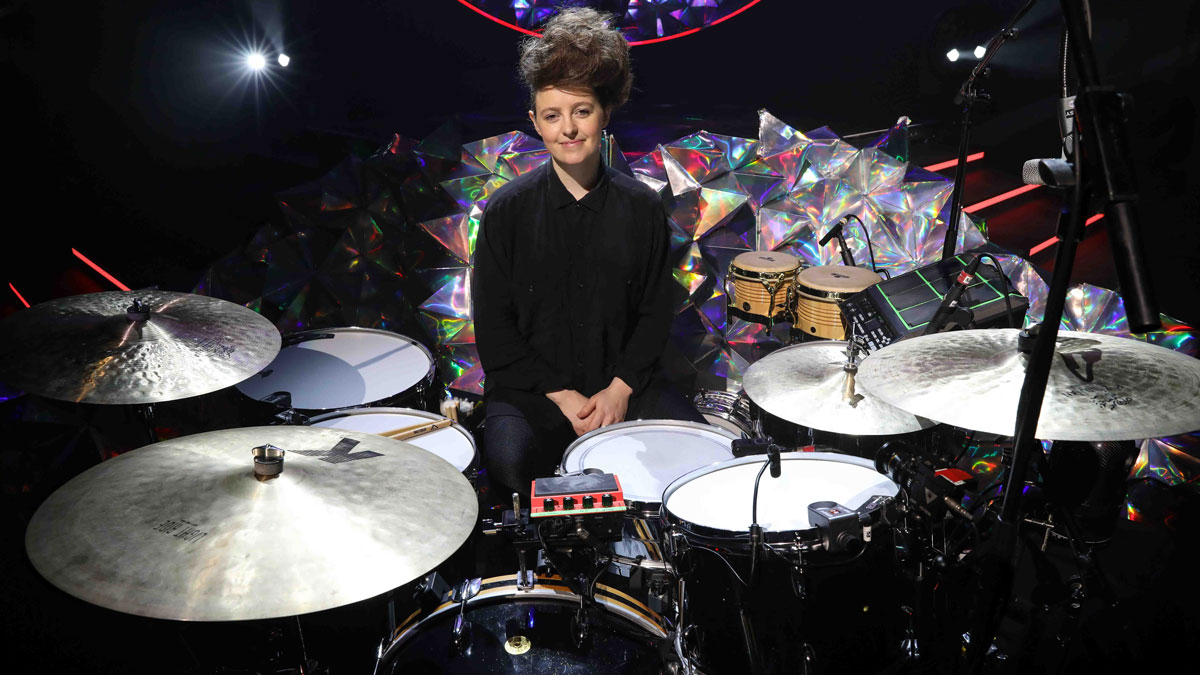 Having travelled the world with lots of different musicians, I wondered what Daisy considers to be key factors in being a good band member and what life ‘on the road’ for a world tour is really like?

DP: I think the main factor is to not take anything too seriously! As for life on the road, it depends on the tour, but when you are on a long campaign most things just become extremely funny in a way it’s not possible to explain to anyone who is not on that tour.

I totally get that. Gigging regularly with a group of musicians forms a real bond and connection. It becomes like a working family. There are always little personal traits and shared experiences that become funny. It’s also great to grow together as musicians. I know Daisy is very passionate about a project which was formed by a group of friends. I asked Daisy to tell me more about ‘Mesadorm’…

DP: Mesadorm is a project started by 5 friends in 2017. I started a record label called Babylegs Records to release our music as we had become disenfranchised from the way the industry has dealt with music of an alternative genre. We have now taken on some other artists too. Mesadorm has released 2 albums ‘Heterogaster’ and an acoustic sister album ‘Epicadus’ and we are working on our next album now. They have recently been involved with writing songs for the Netflix series ‘The Irregulars’. There is a busy summer of gigs coming up including Womad and Cloudspotting and the band will be touring their new album early 2022.

From family life with musicians to family life at home. I know Daisy is devoted to her beautiful family and that life very much revolves around her wife and baby son. Although life as a musician is not back to normal yet after lockdown, I wondered how Daisy juggles family life with being such an in-demand musician.

DP: I still don’t have many gigs yet as there aren’t any, so family life has been super chilled with just the odd recording or live stream video to do. There will be more action in the summer with Mesadorm at some festivals then potentially a tour with Paloma in the Autumn. My wife has taken a long chunk of maternity leave, so we are just being relaxed and I’m super glad that we get to spend the first year together with our little baby boy.

Having followed Daisy’s career for many years, I’ve seen her perform many different styles of music from jazz, soul, indie to metal, which has given her great versatility as a player. I asked Daisy if she has any preference over the style / genre she plays.

Now, that really was some gig and an incredible performance by Daisy and the rest of the band.

On behalf of all drummers, I wanted to ask Daisy the million-dollar question: How many drum-kits do you have?

Daisy has achieved so much and has performed in some great venues. I asked her what drumming dreams she has for the future.

DP: I’d like to play some of those nice venues with my band Mesadorm.

I feel sure Daisy will fulfil those dreams. Just for fun, I asked Daisy what three things she would take with her to a desert island…

It sounds like it would result in something quite fabulous, an awesome one-woman band with the facility to livestream a gig (wifi permitting)! Finally, I asked Daisy what advice she would give to the next generation of drummers. Daisy has always been about simply playing grooves and so it is not surprising her advice is “less is more”.

I really admire Daisy’s passion for all she does, and it makes me very proud to be part of such an amazing jazz sisterhood. Sharing her incredible achievements is the perfect way to celebrate the tenth International Jazz Day and nothing sums up Daisy better than her closing words…

DP: Always play from your heart.