Between 1990 and 2005 the Jazzpar Awards, founded by trumpeter Arnvid Meyer were a staple of the Danish jazz scene. Each year the international jury, mostly comprised of the editors of the major jazz magazines, awarded the prize, chosen from five nominees among internationally recognized performers.

Due to the loss of sponsorship and the death of founder Arnvid Meyer the award was last handed out in 2004 to Italian drummer Aldo Romano. During it’s history the award went to players such as Tommy Flanagan (1993), David Murray (1991), Django Bates (1997) and Enrico Rava (2002) to mention just a few of the distinguished recipients.

Jazzpar was more than an award. It was also the starting point of The Jazzpar Activities, taking place in the spring of each year. The principal idea was not only to honor an outstanding artist within jazz and related fields but to also draw attention to music from different parts of the world. The Prize carried with it both a cash award of 200,000 Danish Kroner (approx. 30,000 US $) and presentation of The JAZZPAR Bronze Statuette designed by the Danish artist Jørgen Haugen Sørensen. The winner was given the opportunity to put together an ensemble and tour this throughout Denmark. The last stage on the tour was The Prize Presentation Concert in Copenhagen, the capital of Denmark.

In 1998 the prize was awarded to guitarist Jim Hall. Brian Priestley wrote in his liner notes: “Already at that point, his career had covered more than 40 years and evoked past associations with people such as Chico Hamilton, Jimmy Giuffre, Sonny Rollins and Art Farmer, plus the fact that they had some of their most interesting and unusual groups when Jim Hall happened to be in them. Some of his other frequent but less regular collaborators, like Paul Desmond, Gerry Mulligan, Bill Evans or Ron Carter, also clearly chose him for the stimulation to be gained from the experience. 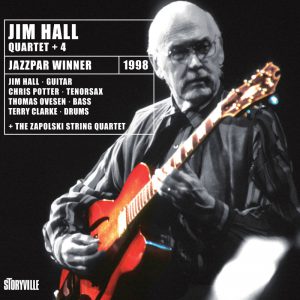 No wonder, then, that less well-known musicians were more than happy to be associated with Hall, and those who worked with him in Denmark are excellent examples. Chris Potter (born January 1 1971) was then another promising newcomer, who himself won the Jazzpar prize in 2000 and is now regarded as a leading saxophonist of his generation. The Canadian drummer Terry Clarke (born August 20 1944), then based in New York, had played and toured with Hall since at least 1975, when he made the first of several albums with him. The bassist on the Danish tour was the latest in a long line of local virtuosi, Thomas Ovesen. As is usually the case with Jazzpar tours, there was more than one Danish musician involved but, unusually, at Jim’s request the others were a string quartet, formed of members of the Radio Symphony Orchestra and led by Russian violinist Alexander Zapolski.”

On March 19 2021, Storyville Records with release an album recorded during the 1998 tour and remastered in 2021. The album titled ‘Jim Hall Jazzpar Quartet + 4’ will be available on CD and digitally on all the regular streaming and download platforms. The repertoire presented on the album is quite diverse and the addition of a string quartet allowed Hall to pursue aims which were present throughout his career. In the Albums liner-notes, jazz writer and pianist Brian Priestley wrote:

“He had made a notable re-examination of the dialogue between the needs of composition and improvisation in his recent albums, especially with ensembles differing from the conventional trio and quartet line-ups constituting the majority of Jim’s output in earlier decades. Although he recorded duos of guitar-and-piano as early as 1962 (with Bill Evans) and, in 1976, duos of guitar-and voice (with his wife Jan) and guitar-and-drums (with Terry Clarke), nevertheless in the 1990s he had created carefully chosen chamber groups with, for instance, a couple of string players or a handful of brassmen, often with no drums or with drums but no bass. That kind of freedom is clearly evident here, for instance in the interplay with Clarke during “Stella By Starlight”, and with Potter towards the end of “Chelsea Bridge” (where Potter picks up Jim’s earlier quotation from “Rockin’ In Rhythm”) and in the duet encore on “In A Sentimental Mood”.

“The compositional element, and the continuity of Hall’s career, is brought into focus by the two pieces with strings and the fact (somehow emphasized by the omission of one other octet track, for lack of space) that they were written 45 years apart. If these seem more concentrated and more ‘serious’ than the earlier part of the program, that feeling is deliberately undermined by the first encore, Zapolski’s arrangement of “Purple Haze” by Jimi Hendrix, the guitarist who 30 years ago threatened to blow away all the subtleties personified by Hall. Jim may have the same initials as Hendrix but, hearing him use an octave pedal and then de-tune his A-string while sounding all the while exactly like Jim Hall, you can see another example of self-effacing confidence.”

There is no doubt that this is an important release not only for Jim Hall fans but also for those lovers of jazz guitar.