Swiss based guitarist Dimitri Howald released his latest album with his Ilja project titled “Spiritual Cycle” late in 2020. Most people would not believe the volume of albums we receive each week at Jazz In Europe to review, some by artists we know and many from artists we are not familiar with.

This album fell into the later category and what a surprise it is. With very little background material available, I reached out to Dimitri to find out more about the band and the backstory on this album. Howald explained that Ilja is a project he founded in 2015 and exists next to his Trio and Solo projects. Ilja is the largest project that Dimitri manages. During it’s five years of existence the band has traveled extensively performing throughout Switzerland, Germany as well as club and festival performances in Copenhagen and London. 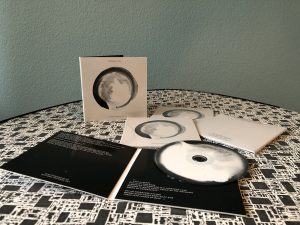 This album follows his 2018 release “Tundra” and shows the bands development stylistically. The accompanying press release stated that the music on “Spiritual Cycle” is “rougher, crazier and yet more intimate than ever.” This statement lead me to take a good look at the bands debut album and compare it to this latest release. I’m not sure if I would completely agree with the statement in the press release, however the music on “Spiritual Cycle” is far edgier than the music presented on Tundra. In addition, the absence of the vocalist does impact the soundscape. On Tundra the vocalist was used largely as an extra instrumental voice with mostly lyric-less melodic lines. What is clear on the new album is that the band has over the years developed a somewhat different sound and a large part of this, in my opinion, is Howland’s guitar sound.

“Spiritual Cycle” presents 9 original tracks, all composed by Howald. While there are in effect 9 tracks 3 of these are either interludes of intros for the following track. The album features largely the same line up as the previous album, Michael Gilsenan: tenorsax, Tom Millar: piano, Jérémie Krüttli: double bass and Tobias Schmid on drums. As I mentioned above, vocalist Leoni Altherr does not appear on this recording and the vocals you hear on the track “Spiritual Cycle” are those of Dimitri himself.

This album has a far more live feel than the previous album. This not only has to do with the recording process but also reflects the fact that prior to the recording of this album the band had just completed tours in Europe and the UK. Regarding the recording process, all of the material on the album was performed live in the studio with no overdubs. When I spoke to Dimitri I asked him about his thoughts on this he replied “We recorded with the entire band set up in one room without headphones. It was really a great feeling to go into the Studio straight after playing the music live every night. In the studio we recorded sets as we would play a concert and then listened back to it and decided what to play again. But we never played a song twice in a row. So I really liked that “unforced” process and I think that’s why it turned out fresh and natural.” I agree, this album does have a wonderfully fresh feel to it.

I really enjoyed the albums opening track “Blue Layers”, a medium up-tempo track based largely around a bass ostinato in 7/4 with solos from Dimitri and sax player Michael Gilsenan. This is a power packed track with great energy and a great opener for the album. Other tracks that stand out are “White Shoes” with a solid triplet based groove and “A Murder of Crows” (editors note: A murder of crows is a large group of crows) sporting a great solo from pianist Tom Millar.

While I enjoyed this entire album, personally I found the title track “Spiritual Cycle” to be the true highlight of this set. Placed as the last track on the album, Spiritual Cycle is a stunning ballad and seems to sum up all that came before leaving the listener itching for another hearing.

I truly enjoyed the recording and can’t recommend it highly enough. I can only imagine that once the vaccine gods smile upon us and music can once again be live that we will be hearing a lot more from Mr Howald and Ilja.