Many years ago I composed a song called “Una lunga conversazione” ( A long conversation) dedicated to a beautiful young lady. We used to talk a lot on the phone and even though nothing ever happened in terms of relationship, I think we developed a strong and intimate connection. I have the same feeling listening to Saso Poposky’s latest album “Fallen Land”. 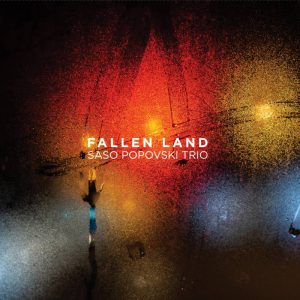 The atmosphere of this recording is very intimate, deep and takes the listener on a suggestive journey based on the constant variation of melody, the emphasis of sound and texture and the interaction and space. The musicians seem to enjoy the company and the journey itself respecting each other in a sort of control of the energies. Saso describes the music this way: “Creating music with Ivan Bejkov and Viktor Filipovski was a kind of challenge in the very beginning as well as the process of realization that time gives birth to simple and straightforward ideas and offers an answer to the question what if?”

The album is a collection of 7 original compositions by Saso Poposky for SJF Records and is inspired by events and episodes of real life that happened over the last 3 years. The origins of the music reinforces the concept of the journey especially when you listen to the album for the first time. Personally, in the beginning, I didn’t immediately understand the message stated in the compositions. I was trying to label something that doesn’t necessitate being labelled simply because the album is a mix of different aspects that eventually for one big picture yet they all retain their own identity.

Here is an example of what I mean: I hear clearly the influence of Bill Frisell in Saso’s playing, the sonorities, the intention and especially the execution of the tunes (there is an album in particular called “Down Home” by Arthur Blythe with Frisell, Ron Carter and Joey Baron that reminds me of some of the songs here) but in the meantime, I can hear the geographical origins and Saso’s roots. Saso has the rare capacity to shape the compositions going beyond the concept of exposing the melody and soloing over a chord progression; the music is always a continuum where the trio tells a story. And yes, when I spoke briefly to him, I discovered that every song does have a story.

“On Mountain top” and “Elgon Sky” narrate Saso’s passion for the mountains and his love for nature and hiking. In the first of these two tracks, the rhythm is strong and gives the sensation of movement. I would say climbing. The percussive part here is accentuated flowing into a nice drum solo that also returns in “Elgon Sky”. The thread running through these two songs also marks the difference between them. In the first case the mood is almost traditional while in the second, Saso reveals a country venue or generally more of a modern vision of the music. 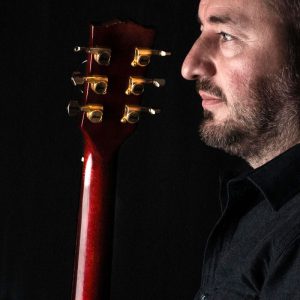 “Fallen land”, the track that opens the album, is a nostalgic and touching song inspired by the village of Brezovo (today abandoned). Saso’s family originates from here and it was only two years ago he received some photos of his grandfather’s house. I mean, it has to be a pretty intense emotion don’t you think? Once again the roots lead to the creation of this album.

In “Spring is near” the guitarist takes space to tell his personal story in this solo guitar track. I have to confess I felt very close to this tune which makes a very important statement. Changing life, changing house or in general just moving. Moving from your comfort zone and looking at the future with a positive vision even though sometimes this seems to be difficult. And if you think of the beginning of the article, looking with a good vibe at the journey.

Closing this interesting album we have the track “When have met” which in some fashion closes the circle. The atmosphere of the songs is similar to the opening one. Perhaps he may have intended to travel to a distant place only to come back in the end? My interpretation…

So, I really recommend this album, plenty of emotion and suggestion. It will take you back to the past like an old black and white photo. But on the other hand, it will also open the door to the future through its nostalgic journey.