Two Albums for the Times…

Like many of you, 2020 has me thinking differently, spending money differently, moving differently.  Many cower from the threat of Covid-19 and then march in the streets to express disdain for a human threat, a threat specifically to people of colour—hence a threat to all of us.  The inequalities of society are laid bare by the pandemic and the tipping point of tensions due to extrajudicial killings by police.

It’s in these times of upheaval that I realise more than ever that everything we do has a political veneer, that everything has a coating of ideology – not just the sign one holds in the street, but everything from the music we select, where we choose to shop, the neighbourhood we live in or aspire to live in, the car we drive or don’t drive, how we speak, the way we interpret every bit of information that comes from the news or our neighbours, and on and on.  Life has always been this way.

When a day is done, I will sit down and maybe reach for a jazz record.  Jazz is versatile and can, of course, be many things to people.  The academy has adopted jazz, and for some, it is a rigorous discipline.  I acknowledge, as a listener, my attraction to the historical chronology of jazz and the hunt for gems in the stacks of used record shops.  But of course, jazz has always been political and ideological, too—incredibly so.  Jazz is the musical metaphor of rebellion.  Jazz is when Black America took European musical instruments used mostly for marching band and military purposes—instruments of rigid conformity and nationalism—and did something radical.  Black America undermined the 4/4 rhythm, adding swing and syncopation.  Black America opted for emotive improvisation.  Black America had their own emotions to exude through music: sometimes joyful, sometimes solemn, often clamorous and revolutionary. 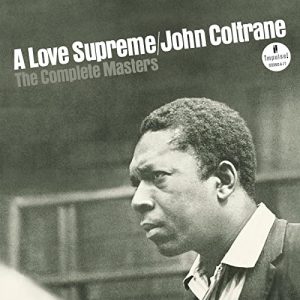 And so, with the risk of being too obvious, I might one evening reach for John Coltrane’s A Love Supreme.  I might grab it because, in part, and for my ears, it is the magnum opus of the most influential and virtuosic jazz player, but also, and mostly because no one will ever bleat and honk and moan and call for change through an instrument like John Coltrane.  To expand Ira Gitler’s often repeated description of Coltrane’s busy playing style, no one will ever play “sheets of sound,” “sheets of [mourning],” “sheets of [clamorous revolution]” like John Coltrane did. Coltrane’s album liner notes bluntly identify the album as spiritual, religious evolution, and the album was played from New York to San Francisco (it sold well) by a culture of people who knew there was a whole heap of injustice in the world that could be replaced with, not tolerance, love.

A Love Supreme was recorded in late 1964 and released in 1965, 55 years ago, the year Malcolm X was assassinated and the year of Bloody Sunday, when peaceful demonstrators crossed the Edmund Pettus Bridge in Selma, Alabama and met police brutality.

Or I might reach for Jasper Høiby’s Planet B.  Høiby, most known for his long-running acclaimed trio Phronesis, released this side project record in early March of this year, at about the time it became impossible for the world to further downplay the threat of Covid-19 as only bluster from the media.  The title smacks of irony, for there does not seem there will be a planet B out there in the cosmos reachable by us anytime soon.  There may be, however, a B version, a flip side of what we are doing now on this planet—institutionally, socially, economically, environmentally—that will allow for more of us, dare I say all of us, to live the effective lives we know we can and deserve to live.

I concede that jazz singing is perfect in the right context, but I am usually sceptical of lyrics detracting from the emotive power of improvised music.  I worry it risks being too heavy-handed when I am hoping for an aural experience that will take my consciousness somewhere that’s actually difficult to describe in words.  That said, A Love Supreme contains uttered words, albeit only three. Coltrane’s saxophone noodles with an imitation of the spoken sounds of the words “a love supreme,” even changing key a few times, until it melds into the repetitive verbal mantra, “a love supreme.”  Coltrane recorded a version without the words, but in the end favoured the spoken word for the album, as if to say that this part you just can’t miss; this part is indispensable; this first and always; now I can take you elsewhere and show you more. 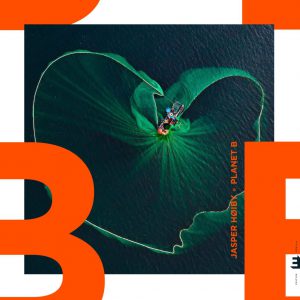 Planet B has more than three words, in fact, many more.  Høiby includes sections of spoken word dubbed over haunting vamping. He intersperses these spoken bits throughout compositions and improvisation that trigger a variety of emotions, from mesmeric repetitions to frenetic demands.  The risk is having these samples of spoken language come across as haphazard or trite, or rebellious or audacious only for the sake of being rebellious or audacious.  However, Høiby’s selections are curated.  They are pertinent and intelligent.

Grace Lee Boggs appears—a feminist, philosopher, and prominent Asian American figure – whose bubbling voice and optimism about social change must have been the reason she worked well into her 90’s.  Charles Eisenstein, a writer and activist, speaks the most on the record, at one point offering the simplest of imperatives: “It doesn’t make sense. So I’m not gonna do it. That kind of refusal to comply. That kind of trust in values that embrace and serve life, that’s what we need on a mass level.”  Ram Dass and J Krishnamurti, who have much to offer about spirituality and psychology in the modern world, appear briefly and emphatically.

Lastly, Høiby chose to insert the voice of John Lewis.  We could call that choice prescient, but I doubt anyone expected institutionalised racism and police brutality to have spontaneously abated in early 2020.  John Lewis was on that bridge in Selma 55 years ago on Bloody Sunday, the same year listeners got to hear John Coltrane chant “a love supreme.”  John Lewis elected to cross the bridge and suffer race-driven violence.  Something about that Civil Rights era felt different, the momentum and determination to effect change, and many feel the same about today’s moment.  On Planet B, John Lewis in his own words, “We’re trying to appeal to the goodness of every human being. And you don’t give up. You never give up on anyone. You arrest me? You take me to jail? You almost kill me? But in spite of that, I’m gonna still love you.”

Jasper Høiby and his musical collaborators are not Black.  They are playing jazz, and as Joshua Redman, esteemed saxophonist, reminded on social media recently, Jazz is “Black music… There is no American music without Black music.  There is no American culture without Black culture.  There is no American innovation without Black genius.”  Høiby, myself, and the rest of those clamouring to make the right statement of solidarity, in the streets and elsewhere, can never really know the Black experience in America and the world.  But we can listen; we can learn more.  Many of the messages have fallen on deaf ears for hundreds of years, but this time feels different.