Orrin Evans And The Captain Black Big Band | The Intangible Between 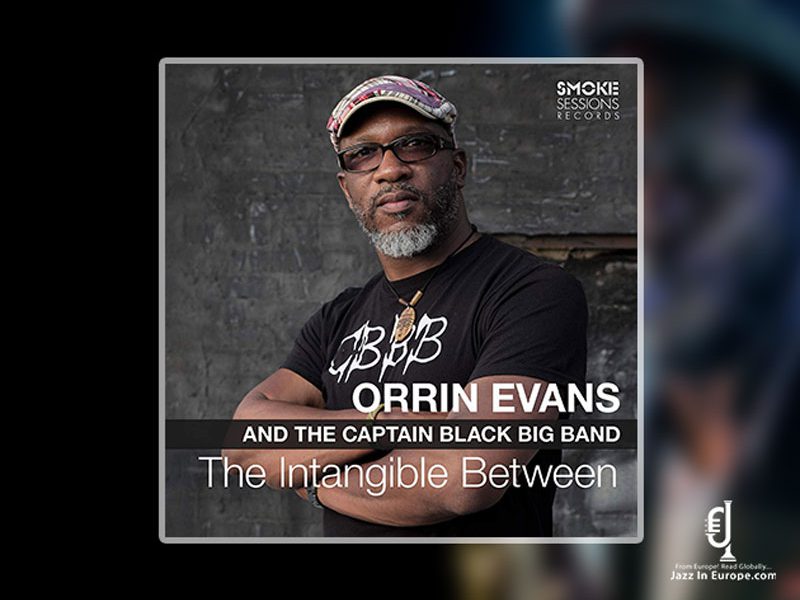 If it takes a village to raise a child, as the proverb says, then it certainly takes at least that much to nurture a big band. Pianist and bandleader Orrin Evans has long used “The Village” to refer not only to his family-like cohort of fellow musicians in the Captain Black Big Band but also to the extended family of fans, supporters and inspirations that have carried the ensemble to a Grammy nomination and its status as one of the most thrilling and revered ensembles in modern jazz.

The Village truly came together to create The Intangible Between, the fourth release by the Captain Black Big Band. Due out May 1 via Smoke Sessions Records, the album was created in the celebratory, communal environment that Evans excels in conjuring. While the recording took place in New York’s hallowed Sear Sound, the atmosphere became transformed from a recording studio into a backyard barbecue.

Evans invited a host of collaborators, stocked the place with food, and threw a party that imbued the music with a vibrant sense of warmth and comfort – while still exalting in the band’s trademark tightrope-walking vigour. In the true spirit of the music, Evans entered the studio with a carefully devised blueprint, down to spreadsheets listing the musicians planned for any given tune – and then left room for spontaneity to take over when it would.

“I’ve always wanted to do a project like this,” Evans says. “Where I ask all my friends to get together, there’s food in the room, and everybody just comes on in and records. There was definitely a plan, but there was also the element of just getting together and playing. That’s what this record is about to me.” 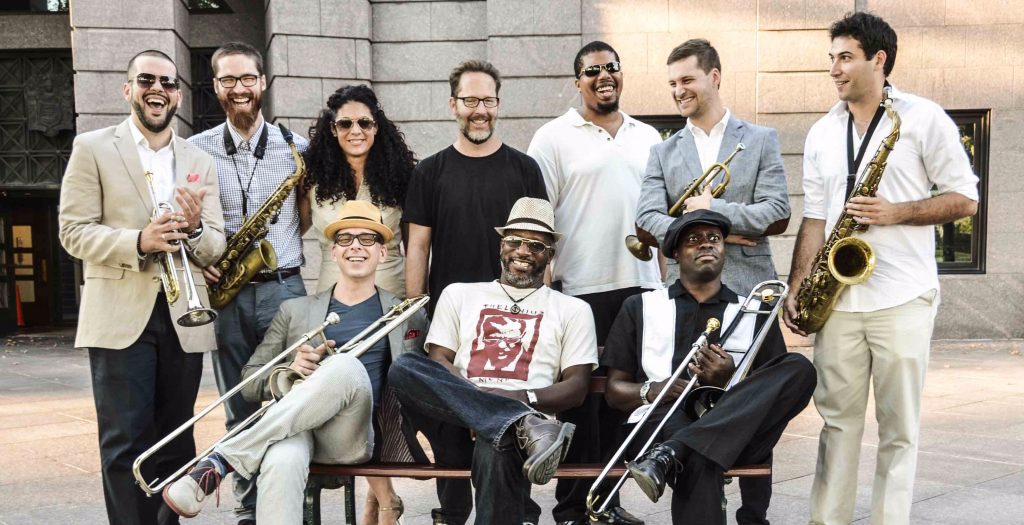 Featuring both taut, keenly focused ensemble playing and raucous, spirited soloing, The Intangible Between reflects the ever-growing chemistry of the core ensemble while celebrating Evans’ open-door policy toward collaborators new and old. The rotating cast of players, while maintaining the more compact scale introduced on the band’s last album, the Grammy-nominated Presence, also features first-time members alongside veterans that joined the ranks in its earliest days and special guests whose collaborations with Evans stretch back over many years and diverse groups. The recording also marks Evans’ first substantial contribution to the band’s book as an arranger, a duty previously delegated largely to his chief sidemen or derived spontaneously by the ensemble.

“Our first two records featured more of my compositions but arranged by people in the band,” Evans recalls. “The third record highlighted music by David Gibson, Troy Roberts, John Raymond and Josh Lawrence; but this is the first record where I’ve really arranged… We’ve been together 10 years, but this is really the first time [the band has] sat down and said, ‘Ok, these are Orrin’s arrangements, and it’s a different school.’”

The title, according to Evans, refers to an elusive decision point, that sense of stepping off a ledge into the unknown that comes with taking risks and setting a new course. With the overdue success he’s achieved in recent years – topping the “Rising Star” category for pianists in the DownBeat critics poll, garnering his first New York Times feature, the awards and praise garlanding his Captain Black albums, the increased focus that accompanied joining The Bad Plus – has come both opportunities and disappointments.

“This record is just about going for it, taking those projects you’ve been dreaming about and just making them happen,” he says. “The industry constantly tells you to wait, but for how long? Why not just do it now?”

In part, that impetus was fueled by Evan’s career trajectory, but he was also compelled by the sobering loss of two of his peers: trumpeter Roy Hargrove and drummer Lawrence “Lo” Leathers, both of whom are paid tribute on The Intangible Between. “There are things that I wished I had said to both of them,” Evans reflects. “Nothing major, just the little things that you think you’ll be able to say the next time you see someone. But you just don’t know. You really have to deal with the intangible, the space between whether you’re going to do something or not.”

Leathers receives a tender farewell from the full band on Evans’ own “I’m So Glad I Got To Know You,” written in the immediate aftermath of the drummer’s shocking and unexpected death. The band’s version of “Into Dawn,” arranged by trombonist David Gibson, is both a brilliant rendition of a gorgeous Hargrove composition and a typical piece of Orrin Evans audaciousness. Gibson, Lawrence, Bashore and trombonist Stafford Hunter have all been key lieutenants in the big band from its early days, supplying arrangements or, in Evans’ words, “being all-around partners in crimes and filling in the blanks whenever there are any.”

Gibson attributes the band’s growth and success to “the paternal spirit that inspired its birth. Orrin has created an environment that encourages all to take risks in pursuit of spontaneous and authentic musical conversations. He cajoles, inspires, and supports the group from behind the piano or in the dressing room. The company of musicians he’s invited to the party is comprised of those willing to participate in a grand trust exercise that I find to be very uncommon in a big band setting… Every musician is committed to supporting the pursuit of honest moments of music; our truth.”

From trumpeter Sean Jones, with whom Evans has played for well over a decade, to bassist Dylan Reis, a young bass protégé, to bandmates making strides in the jazz scene after being nurtured by Evans early in their career in Philly and beyond – drummers Anwar Marshall and Mark Whitfield Jr., saxophonists Immanuel Wilkins, Troy Roberts and Caleb Wheeler Curtis, and bassist Luques Curtis, among others – The Village speaks with a loud, unified and infectious voice throughout The Intangible Between.

“It really matters when you know you have a tight-knit circle, and that you can rely on your circle for whatever you need,” Evans says. “The Village is a unit of people that you can trust and that love you. It’s an open door to the possibilities of knowing that you’re part of something for the greater good.”