April Jazz, organized annually in Espoo at the end of April, is the biggest jazz festival of the capital area of Finland. The 2020 festival would be the 34th edition in April Jazz’s history of introducing the most interesting variety of international and Finnish jazz artists every year. After the unexpected turns, April Jazz is now one of the first events to transform itself into a live streaming festival, taking place in its original timeline. 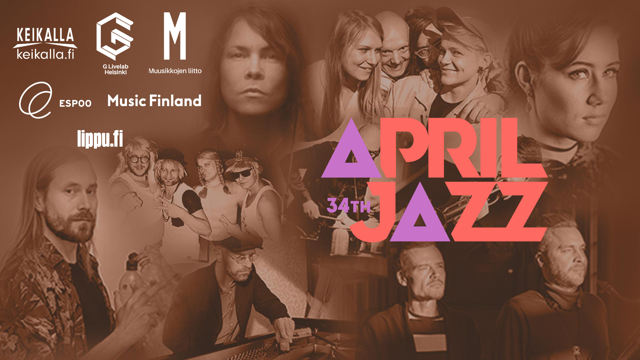 “Canceling our festival was certainly a setback. But soon we started to ponder, whether it might be possible to utilize streaming technologies in arranging this year’s festival after all. In a short time, we needed to solve many puzzles concerning e.g. the artists and technical details. Group size restrictions placed by the Finnish government and the safety matters for all involved brought its own challenge. Now I’m very happy to be able to announce that the streaming festival is going to happen”, April Jazz festival director Matti Lappalainen explains.

The April Jazz Subgrooves program presents some of the front-row-artists of the Finnish jazz scene along with rising stars of the new generation. Since the restrictions on group sizes need to be taken into account, this is a great opportunity to showcase smaller groups such as duos and even solo performances, which usually are challenging to bring to big festival stages.

“The smaller groups convey the intimate and dangerous atmosphere that makes jazz such an interesting form of music. High-quality video-recording can now bring the essence of live performance straight into our living rooms”, explained Lappalainen. The challenging situation has also created an environmentally sustainable opportunity to introduce the buzzing local jazz scene globally.

In addition to music, the concert intermissions will be filled with earlier recorded interviews with the artists of the evening. The interviews, as well as the lineup presentations, are hosted by Finnish Radio Helsinki host and DJ Njassa. Discussions are conducted in English to serve international audiences as well. The venue for the festival, known for its hi-end technique, is G Livelab Helsinki.

The festival line-up and concert schedule can be found here at the April Jazz Subgrooves website.