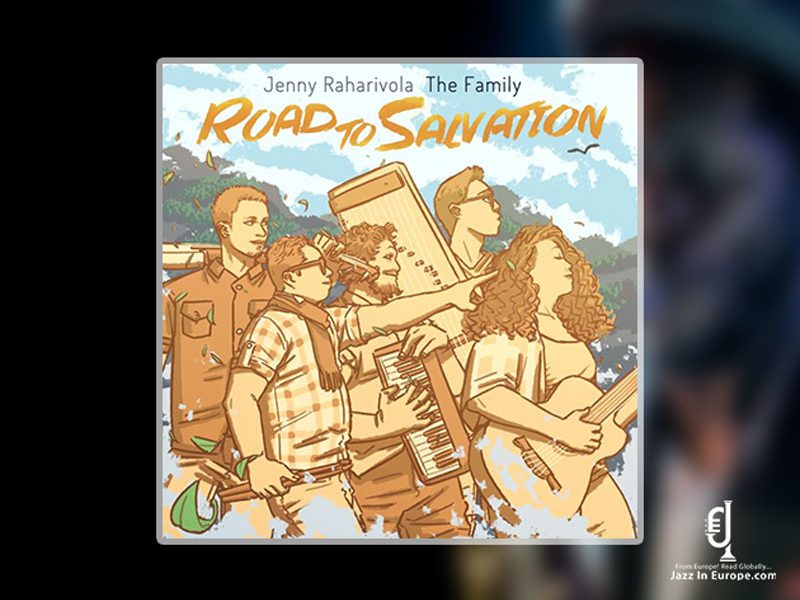 Jenny Raharivola | The Family the new EP, released March 06, 2020, delves deeply into life’s journey. A complexity of trials, tribulations, personal doubts but ultimately through these experience one can achieve joy. This first (extended play) EP is aptly titled: “Road to Salvation”.

“A sweet aroma of warm friendliness in the air, hugs and joyous laughter at each practice, and professional encounters leading to deep friendships. Embodies the choice to extend your family“. Music according to Jenny Raharivola, a young woman who embodies the family spirit of this group of Malagasy musicians with a contagious joie de vivre.

Born in Antananarivo, the capital city of Madagascar, Jenny is a young songwriter, guitarist and singer well-known today in the Malagasy artistic circles for the strong emotional and story-telling value of her instrumental compositions. The latter is strongly imbued with the different folk and traditional rhythms of her country which she delicately combines to bring compositions that are contemporary, jazzy and adorned with nature sounds.

The famous French bassist Dominique Di Piazza, known for the virtuosity and precision of his one-of-a-kind style, discovered her at the Madajazzcar International Festival – which he was the guest of honour – in October 2019. Particularly touched by her music, he spoke of her in this way: “Finally a piece of music that epitomizes the colours of the culture in which she was born. It’s all I love. Jenny’s music grips us deep inside and then lifts our souls to Him, who gives us the hope of eternal life. ”

March 2019, the group “Jenny Raharivola | The Family ” was formed. This group of multi-talented Malagasy musicians bring together their expertise combining with Jenny Raharivola’s compositions to make their voices heard into the world of professional music.

Other members of The Family are – Josia Rakotondravohitra, the drummer and percussionist of the group that needs no introduction in the Malagasy Jazz world. Also, well-known on the international scenes performing at the “Bari in Jazz Festival” in Italy as well as popular venues in Europe and the Indian Ocean region.

The popular Madagascan keyboardist and jazz pianist, Njaka Rakotonirainy. A musician with a deep appreciation and understanding of the music from the remotest areas of Madagascar. Mixing traditional instrument sounds such as the “Marovany“. transposing and fusing with jazz music. A well-liked and regular performer at the International Festival “Madajazzcar” with his trio called Weaver trio and at the “Yelewa Jazz Festival” on the holiday island of Mayotte.

The young and exciting electric bass virtuoso Ranto Rakotomalala. having built of a name for himself performing at jazz clubs and music festivals in the Paris region with a unique groove that is strongly influenced by  Madagascan rhythms. Picked as a new emerging jazz talent and winner of the Madajazzcar springboard in 2009.  His bass playing is in perfect symbiosis with the singular way Jenny Raharivola plays the guitar. The two musicians quickly connected. This led them to work together on all of Jenny’s projects.

The final family member is the young multi-instrumentalist Tsanta Randriamihajasoa who comes from a large family of Malagasy musicians and whose name is already buzzing on social networks in the capital city of Antananarivo. His playing has been broadcast on BBC Africa channel as well as being featured in newspapers of the Big Island. At just 21, this young musician plays twenty instruments with a rare mastery. His love of jazz has seen him perform at jazz festivals including the “Bari in Jazz Festival” in Italy as a trumpet player or pianist, and in events purely dedicated to traditional Malagasy music as a player of “Marovany” or “Sodina” (flute).