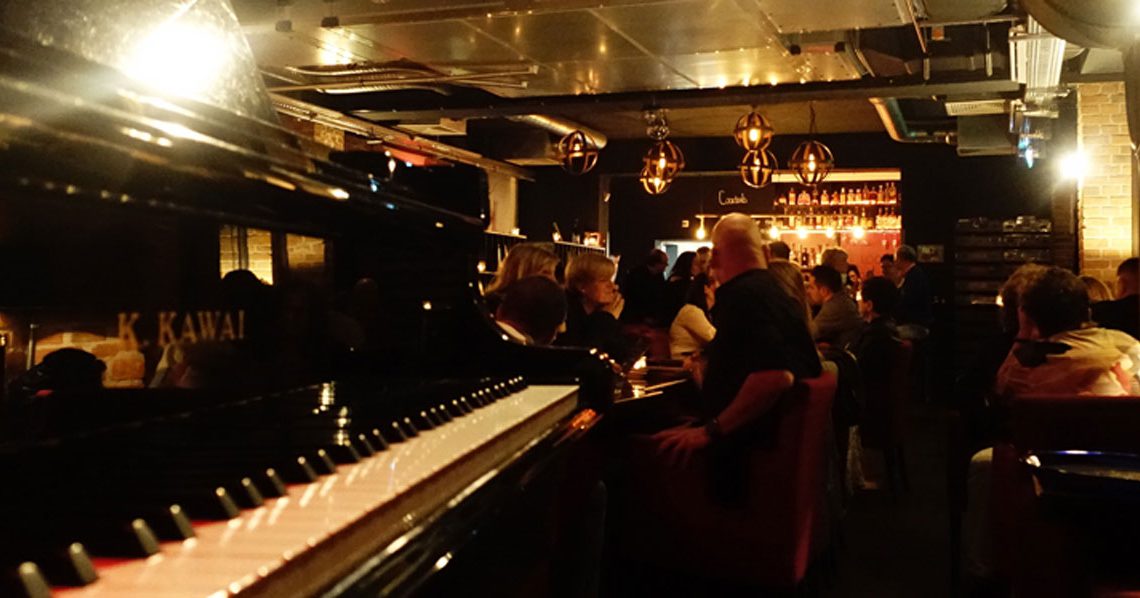 Recently I had the pleasure to travel to Berlin and enjoy the final days of summer in the German capital. This time around I decided to pass on my “Go To” jazz venues and take the S-Bhan north to Reinickendorf to discover a venue I’ve heard a great deal about, The Loci Loft. Playing that evening was the Arik Strauss Trio, featuring Hendrik Nehl on Bass, Andrea Marcelli, Drums and of course Arik Straus, piano.

On my arrival the first thing that caught my attention was the atmosphere in the room. Situated in an old industrial complex (the building used to be a lamp factory) the club’s decor mirrors the buildings history respecting it’s industrial heritage. I found the library fully stocked with books on jazz located next to the bar, a great touch. I had the opportunity to briefly speak with the clubs general manager Florian Achatzy to find out a little more about the clubs history and focus. The club started in 2016 out of a desire by the owners to create an up-market venue for Jazz music combined with great food. According to Florian this was something needed in the local area. Speaking about the clubs atmosphere he went on to say “We like to describe it as Outside your in the suburbs of Berlin, Inside your in Harlem”. When asked about the programming policy, Florian explained that due to the clubs location in the cities outer suburbs he has to program to fit the local tastes and one can see this in the broad programming raging from mainstream jazz through to blues and soul. 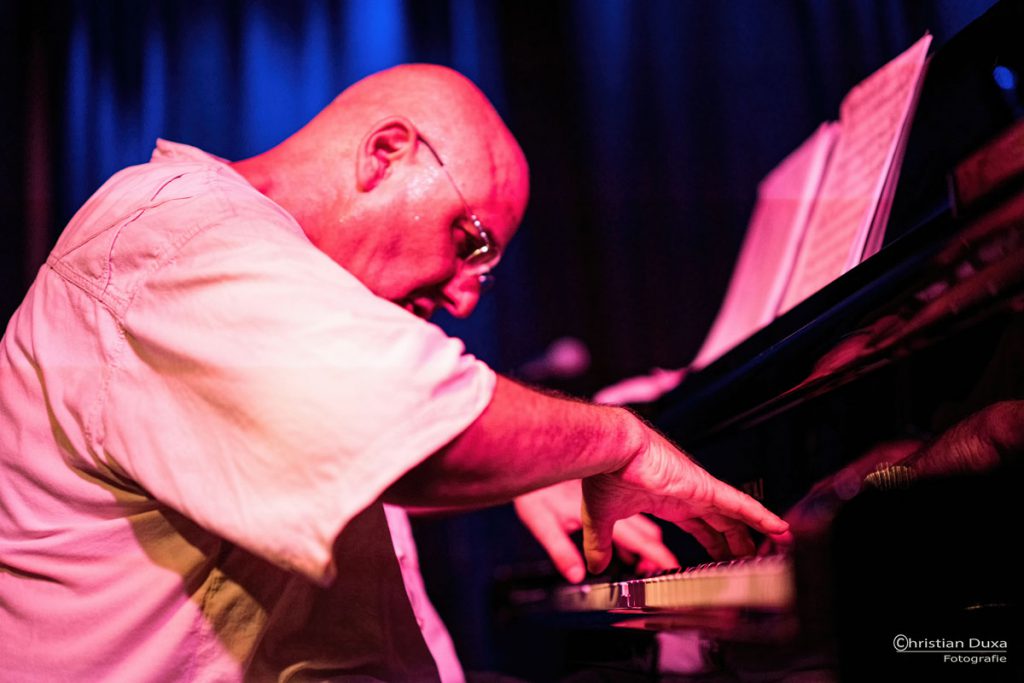 Arik relocated from Israel to Berlin two years ago and since this time has started to become a fixture on the Berlin scene. At the loci Loft, Arik and the trio performed largely material from his latest album “Closing The Circle”  released in June. Being familiar with the album I was interested to hear how the material translated to a live environment. The first thing that struck me was the energy that exuded from the stage. On the album Strauss’s playing is highly refined and live, while this is still the case, he is far more prone to risk taking adding an extra dimension that did not go unnoticed by the crowd.

Strauss’ long time compatriot Andrea Marcelli not only showed his sensitivity as an accompanist but also propelled the trio picking up on the subtleties of Strauss’s lines and at times taking the rest of the ensemble with him in a different direction. The newest member of the ensemble, bassist Hendrik Nehl was solid throughout both sets providing a strong harmonic and rhythmic basis and displaying a strong sense of melody both in his bass-lines and solo passages. 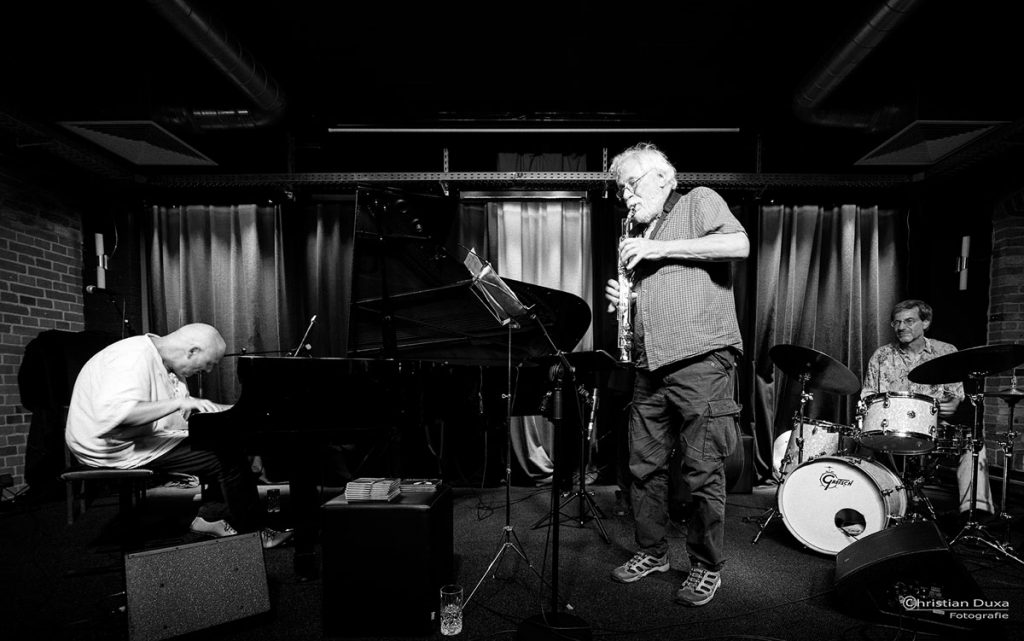 The evening kicked off with three tracks from Arik’s new album “Nicht so laut”, the title track “Closing the Circle” and the funk inspired “Off to Berlin”. I enjoyed the variation in feel of these three however for me the highlight of the set was the ballad “Bad Harzburg”, there was a tangibility to the trios interplay on this piece that held the audience captivated, I’d almost go so far as to say in the quieter passages you hear a pin drop. Towards the end of the set the trio was joined by Saxophonist Joe Kucera for two tunes adding an extra melodic layer to the whole.

The second set contained repertoire from Arik’s previous releases. Of particular note was “Rising Montuno” from the “Mostly Ballads” ballads album. This track, presented as a medium Bossa, contained some interesting rhythmic aspects and I enjoyed the manor in which Arik was able to introduce, or should I say, hint at some Cuban influences without losing that Bossa feel. During this set the band was joined by Arik’s wife Sigal Adler-Strauss adding wordless vocals. This added a surreal aspect to the soundscape that was very enjoyable however I would have preferred to have seen her a little more up-front in the mix. Joe Kucera also returned to the stage in the second set. The show concluded with a rousing version of ‘Blues For Sigal” from the album “In Spite of All” that resulted in a standing ovation from the audience.

All in all a great concert in a truly inspiring location. If you get a chance to see Arik and the Trio live, I would urge you to grab the opportunity.

More Information about Arik Strauss can be found here at his website. To find out more about the Loci Loft click here.