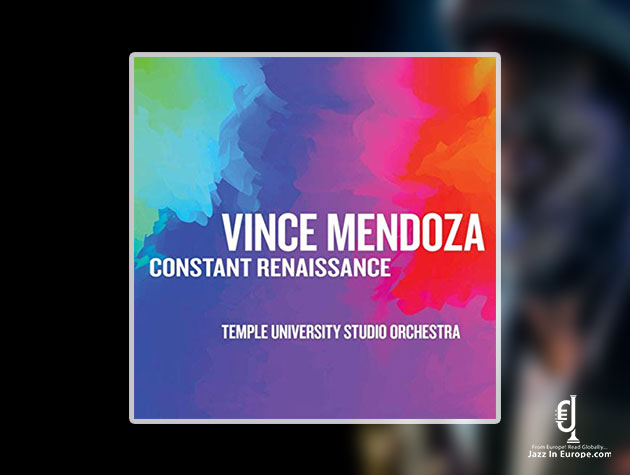 A Six-time GRAMMY® Award-winning composer, arranger and conductor Vince Mendoza was at Temple University and the Kimmel Center for the Performing Arts this past March as part of a week-long residency with students at the Boyer College of Music and Dance. This culminated with the world premiere and recording of Constant Renaissance, available now on the College’s own label, BCM&D Records, which has produced 30 recordings and garnered three GRAMMY® nominations.

Constant Renaissance is a new work featuring trumpeter Terell Stafford, alto-saxophonist Dick Oatts and the Temple University Studio Orchestra. Mendoza wrote the piece with Stafford and Oatts in mind, both of whom are on the jazz faculty at the university. Mendoza was inspired by Philadelphia’s history with jazz and its connection to innovation, reinvention and rebirth. “You might say that the city is in a ‘constant renaissance,’” Mendoza states, “and although some might say that jazz was the “other” sound of Philadelphia, in reality, many of the important innovations in jazz were born in the clubs and streets of this city, riffing and morphing, and eventually cross pollinating with the work of other artists in Philly.”

Temple University’s Boyer College of Music and Dance regularly commissions major composers to write or arrange new pieces for student ensembles. “It’s an invaluable experience for our students to rehearse, perform and record new works,” said Robert T. Stroker, Dean and Vice Provost for the Arts at the university, “having a composer of Vince Mendoza’s reputation and stature on campus for a week gives our music students a unique opportunity to learn from one of the best in the field.”