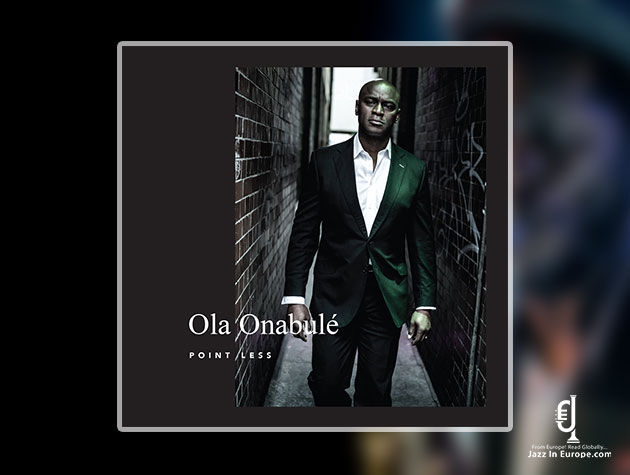 Socially conscious singer/songwriter Ola Onabulé has built an enviable career as an international touring performer and has now turned his attention to the North American market with a newly recorded collection of original songs. Onabulé’s meticulous attention to detail in his arrangements and production as well as the support from Sennheiser/Neumann have contributed to the manifestation of an impressive recording.

Point Less, is a follow up to Onabulé’s last album, It’s The Peace That Deafens, with the new album boldly expressing his views on social injustice, reminiscent of Marvin Gaye’s What’s Going On. It is an activist’s call – at once a celebration of life and a cautionary take on the social forces that threaten it. Violence, immigration, xenophobia, betrayal, and dignity are themes considered on Point Less, rendered with a powerful and knowing generosity of spirit. Onabulé is rueful yet optimistic.

So embodies the artistic – and entrepreneurial – philosophy of Onabulé, whose latest release, Point Less, is a giant leap forward in Onabulé’s artistic canon. Moreover, it affirms his place among contemporary vocalists. He is a rugged individualist, a deeply soulful musician who has absorbed the surround sound of his youth – jazz, world – and incorporated key elements into his distinctive style. He is direct and passionate, confident in his ability to sell a song with conviction.

This should surprise no one. Onabulé’s performance history is vast. A host of winning projects with small groups and the big bands of Cologne (WDR), Stuttgart (SWR), Frankfurt (HRBB), Denmark (DRBB) and other prestigious aggregates animate his resume, as do the concert halls and international festivals that routinely invite him to perform – Montreal, Vancouver, San Sebastian, Istanbul, Umbria, and London, among them.

Onabulé’s reach is global and he is emerging as a musician’s musician, possessing a range and aptitude that place him on that shortlist of special artist and entertainer. His three-and-a-half octave baritone, the powerful emotions he conveys with it, and his elegant appearance connect with audiences around the world. Whether in person or on record, Onabulé gives his all, which includes a thoughtful interpretation of his experiences and the world around him.

“Hands-on, self-sufficiency has always been my mantra for survival in the music game,” says songwriter and producer, Ola Onabulé. “I always felt like the creative parts of song writing, producing and recording were merely different stages of a single process.”

Point Less is a cunning play on words that captures current and artful observations sure to resonate with fans, old and new.