And of course, “Bluesette” was played, Toots Thielemans’ most famous composition. That was the encore for the grateful audience after the tribute to the most famous Belgian musician at the 50th anniversary of Jazz Middelheim in Antwerp. Also “What a Wonderful World”, the song Toots used to end his performances. There was “Ne me quitte pas“, that emotional chanson of Jacques Brel. The tribute was the last concert on the Main Stage of Jazz Middelheim. Sunday 18 August is a day that visitors to the concert will remember. The music of the harmonica virtuoso, who was the godfather of the Antwerp festival for decades, continues to live on because the public wants to. Toots Thielemans died in 2016 at the age of 94. He once reflected that he felt “best in that little space between a smile and a tear”. The audience was in that little space that Sunday night.

Pianist Kenny Werner and Grégoire Maret, the French harmonica player, started the concert. After a few songs, drummer Dré Pallemaerts and bassist Nicolas Thys joined them. But the concert only got real momentum when guitar greatness of Philip Catherine came on stage and the band played his composition “Dance for Victor“. That song was a favourite tune of Toots Thielemans. A standing ovation was the reward for the contribution of Philip Catherine.

Jazz Middelheim 2019 was a festival with lots of emotion and lots of quality. Trumpeter Ambrose Akimusire, the artist in residence, was responsible for a lot of this. He performed four times from Thursday 15 to Sunday 18 August.

The program “Mae, Mae” was not only excellently performed, but also impressive. Harrowing recordings of a female blues singer who was jailed in Mississippi just before the outbreak of World War II form the leitmotif. Ambrose Akimusire wrote the music. Besides the impressive play of the trumpeter, there were also main roles for pianist Gerald Clayton, guitarist Marvin Sewell and singer Dean Bowman. Those who ever get the chance to attend the performance must seize it with both hands. Middelheim was the second time that “Mae, Mae” was performed. This happened a few years ago also on the Berliner Jazztage.

There are those events that arise spontaneously. On the first day of Jazz Middelheim, there was such an event. Bass player Reggie Washington arranged concerts at the Club Stage. His third set ended with a tribute to trumpeter Roy Hargrove, who died this year. Reggie Washington was once a member of the RH Factor, the successful band of Roy Hargrove that mixed hip-hop, jazz and funk. The bassist, saxophonist Fabrice Alleman, keyboardist Bobby Sparks and drummer E.J. Strickland started playing Hargrove’s composition “Strasbourg-St. Denis” and after a few seconds, Ambrose Akimusire and singer/rapper Kokayi (Carl Walker) came on stage and joined in. It became an unforgettable experience: this is how jazz honours its heroes.

Tenor saxophonist David Murray had expanded his quartet with slam poet Saul Williams, who interspersed rebellious texts on the audience. Vocalist and musicians made it a fiery collaboration, to the great enthusiasm of the public. Day 1 ended with another famous tenor saxophonist, Pharoah Sanders (78). The years are beginning to count for the man who is nowadays confined to bringing a tribute to legend John Coltrane.

Charles Lloyd (81) played on Day 2, but he does not suffer from old-age phenomena. The tenor saxophonist and flautist is of an extraordinary level. It was an intense concert with Interplay and solos of an extraterrestrial level. Pianist Gerald Clayton and guitarist Marvin Sewell (also on slide guitar) are of exceptional class, just like their bandleader.

Another veteran, trumpeter Enrico Rava (80), also convinced. The godfather of Italian jazz travels around the world with old and new compositions and a handful of younger countrymen. Guitarist Francesco Diodati provided electronic support for a Rava as I have rarely heard: fierce and corrosive. This musician is not yet finished with his artistry. He played the fluegelhorn in Antwerp (the trumpet had remained in Italy or in the hotel room in Antwerp): what a beautiful sound.

Joe Lovano, another master of the tenor saxophone, performed on the 4th day of the festival with Tapestry, the trio with pianist Marilyn Crispell and drummer Carmen Castaldi. Tapestry mixes spirituality with free jazz elements. Singing bowls gave a special “colour” to the concert. Lovano played a month ago at Gent Jazz as a guest of Diana Krall. That was a phenomenal concert, but “middle of the road”. In Antwerp, he showed another side of his artistry, his great artistry.

Young Belgian drummer Lander Gyselinck played with Stuff again an exciting concert but was most impressed with the Ragini Trio. The Franco-Serbian pianist and keyboardist Bojan Z. and the Indian Raga singer Sawani Mudgal also participated. The tenor sax of Nathan Daems and the Indian “scat” of the singer fused together to a warm sound, it was a special experience. 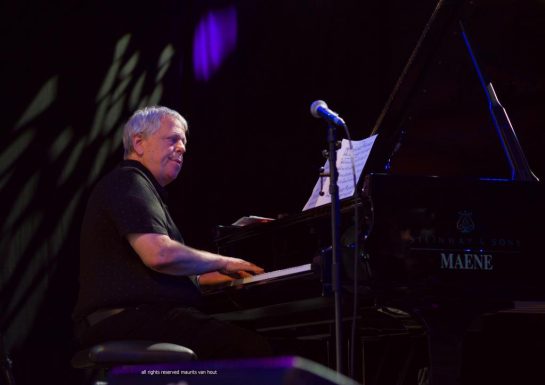 The British tenor saxophonist Nubya Garcia and her band received much enthusiasm from the audience. That was also the case with Louis Cole and his Big Band. The Kenny Werner Quartet, with saxophonist David Liebman, played a set in which technique and expression led to depth.

The festival in Antwerp has attracted a total,  exceeding16,000 visitors. The organization was happy with the turnout, considering the weather conditions were less favourable than in previous years.