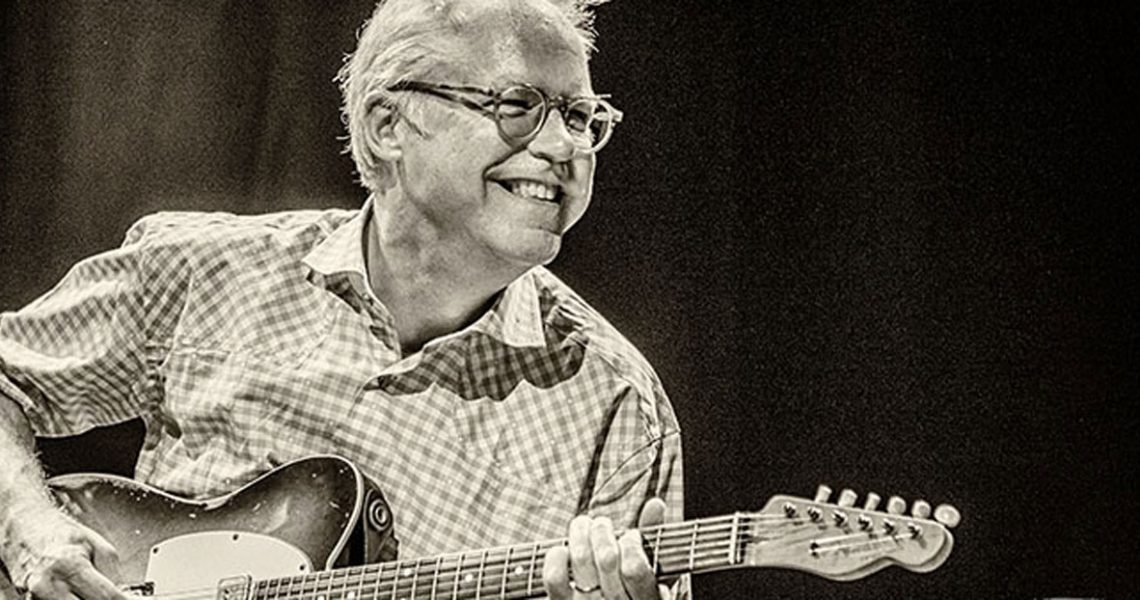 In Conversation: The Fast-Paced Life of Bill Frisell

Ted Panken had the chance to catch up with Bill Frisell for Qwest TV on the eve of his residency at the Big Ears Festival in Knoxville, Tennessee. He spoke to us about the beauty of his collaborations, the difference between being band-leader and band-member, and about his non-stop New York life.

On March 18, the day he turned sixty-eight, Bill Frisell celebrated by performing with Charles Lloyd’s band and singer Lucinda Williams, in Durham, North Carolina. The morning after, the iconic guitarist was preparing for a 340-mile drive over the Blue Ridge Mountains to Knoxville, Tennessee, where the Big Ears Festival would present five Frisell concerts in five separate contexts on five different nights.

One would be a duo engagement with bassist Thomas Morgan, Frisell’s co-billed partner on the new ECM release, Epistrophy, which drops two years after Small Town documented their March 2016 engagement at New York’s Village Vanguard, eighteen months before Frisell moved there after a thirty-year residence in Seattle. Busy as Frisell was, he took a half-hour from his hectic itinerary to discuss these albums, and the place he’s at. 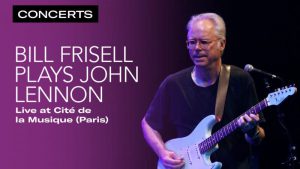 Ted Panken: During the week at the Village Vanguard in March 2016 that generated Epistrophy and its predecessor, Small Town, did you and Thomas Morgan know it would generate such recordings?

Bill Frisell: Yes, we knew it. I guess a year before that, we’d played a week in duo at the Vanguard. [ECM Vice President] Sarah Humphries heard us and she got fired up about making a record. We recorded four sets over two nights. I was still living in Seattle at the time, so Thomas came to visit and we boiled it down basically to the equivalent of two sets. We tried to zero in on a few tunes. The problem was that everything we played … I don’t want to be braggin’ … but it all sounded really good. Originally there was some talk about it all coming out at the same time, but they thought it would be better to spread it out.

TP: I think this is your first live album since East/West. What are your feelings about playing live versus in the recording studio, as you did on your 2018 solo album, Music IS, on which you incorporate overlays and loops? Did you generate Music IS in real time or was there a certain amount of overdubbing?

BF: There was overdubbing. That was a different mental process. I put parameters around it. I’d been doing so many things where I’d go off on these tangents – the Beatles or film music, or this or that, and I wanted to get back to playing my own compositions. But I also wanted to keep myself in a state of mind where I wasn’t sure what I was going to do or play next. So in preparation, I actually played a week at the Stone right before I went in the studio. Rather than working out the material for the solo album, every night at the Stone I forced myself to play either brand-new music, or music that I hadn’t played in a long time, or stuff I didn’t really know. I kept that same frame of mind going in the studio; I brought this big pile of music and started from somewhere, just picked something, and then let whatever I started with generating what I did next. I didn’t want to try to recreate something I’d worked out. I wanted the studio to be where it was coming together for the very first time.

Playing live is really different. That’s what I loved about having the chance to do this at the Vanguard. It’s weird, because I’m basically kind of shy (though I guess I’ve become more outgoing as time has gone on), but when I’m playing on stage, I get immersed in the music. The audience becomes a part of it, so I don’t want to say I shut the audience out. But the best place for me is when I’m just immersed in the musicians who are around me, and we’re all lost in the music. That’s where I feel I’m the most myself. And to be in the Vanguard with Thomas like that … talk about a luxurious situation.

TP: What is it about Thomas Morgan’s playing qualities that takes you to a special place?

BF: That’s hard to talk about. It’s almost like a spell descends on everything. I don’t want to try to figure it out too much, because I don’t want to break it. I first met Thomas for a Joey Baron album that we recorded with Ron Carter. Joey wanted to have a rehearsal, just to go over the music and practice it before Ron got there. A friend of his had told him about Thomas, and Thomas came and played all the Ron Carter parts perfectly. I think he was still a student then. It was like, “wow, that was amazing.” But that was just the tip of the iceberg. Then I started hearing Thomas in other contexts, and eventually, he started getting close with Paul Motian, playing a lot with Paul, who was such a huge person in my life. We played on Paul’s last album (The Windmills Of Your Mind — Winter & Winter), and that was the moment where I thought, “Man, I’ve got to play with this guy more.” Then we started playing together a lot.

TP: There’s a tune by Paul Motian on both records, a James Bond film tune by John Barry on both, and a version of “Wildwood Flower.”

BF: I guess the Carter Family’s would be the definitive version. Right now, I’m in North Carolina. I remember one time I was in Asheville, North Carolina, and I got in this cab, and the driver said, “Oh, you play the guitar? You know ‘Wildwood Flower,’ right?” Luckily, I did. But around here, I guess people would say that’s the first song anybody ever learns on the guitar. It wasn’t the first song I learned on the guitar! But I started to play “Wildwood Flower” many years later, and I realized that the song is like an anthem. So I’ve been trying to play it for quite a while, and Thomas fell in like he was born into it.

TP: Tomorrow you’re beginning a residence at the Big Ears Festival in Knoxville, Tennessee, where on the last night you’ll play with a recently formed group called Harmony, with Petra Haden, Hank Roberts and Luke Bergman, all old friends.

BF: That’s the most recent. We’ve just finished doing an album. I think, as of yesterday, I can safely say that it’s going to be on Blue Note.

TP: You go back a long time with Hank Roberts.

BF: We met in 1975. Oh God! Luke Bergman is the most recent connection. I met him in Seattle when I was living there, and we started playing quite a bit. But he recently moved to New York, and we’ve been playing more and more in all kinds of different contexts. This group is another accident. In a way, it was thrown together for a festival in San Francisco. I wanted something different, and I wasn’t sure quite what to do. I thought it would be cool if these people met — Hank playing the cello, Luke playing baritone guitar, and Petra singing. Before the gig, we had a day to rehearse, and when we got there suddenly I realized that Hank sings and Luke is also a really good singer, so as an afterthought, I said, “wow, it would be cool if you all sang.” It turned out that we did a bunch of stuff where they all combined in three-part harmony.

TP: I read an interview where you said that you think of yourself as a singer when you play. It was interesting for me to reflect on that in terms of what you do in all these contexts — how your voice remains so consistently, recognizably you … and yet always in tune with whatever the situation is.

BF: That relates to what I was saying. When I’m playing, it feels like that’s my real true voice, in a way. I played with Charles Lloyd last night. I love that the very first time I played with Charles, right before we were going to do the gig, I went to his hotel room and the first thing he said was, “I’m looking forward to singing with you tonight.” That made so much sense to me. The way he plays, it’s like he’s singing this song. So I’ve certainly been influenced by singers as much as any other instrument. If I’m playing a song that I heard Ella Fitzgerald sing, I’m sort of hearing her voice — or Sam Cooke or Aretha Franklin or Paul McCartney or anybody.

TP: Last year Blue Note released the second album on which you play with Charles Lloyd and the Marvels, Vanished Gardens. That association seems to have been very satisfying for you in recent years, as has been your ongoing collaboration with your old friend [cornetist] Ron Miles. Do you approach situations where you’re not leading differently than your own projects or collaborative projects?

BF: When you get right down to playing, I think it’s the same. Both guys you mentioned, what’s amazing is they make me feel like it’s my own band, in a way. But I guess the difference is, when I go to Ron Miles’ thing, he’s the one who sets up the world that we’re in. He brings his music, and that’s his responsibility. With Charles, he lays it out, “Ok, we’re going to play these songs,” but after that, then it becomes my band, in a way. But when it’s really my band, I’m the one who has to say, “Let’s do this or let’s do that.”

TP: You described the formation of the Harmony group as a kind of happy accident. I’m wondering if, since your move to New York about eighteen months ago, happy accidents have been happening with increasing frequency, and also, now that you’re settled in, how you see the impact of that move on your musical production.

BF: I guess there’s an efficiency factor. When I lived in Seattle, I spent so much more time on the extra stuff, the travelling. It added hours and hours and hours of time. So right away, I noticed that I was travelling a half-hour instead of all day. But also, being in New York intensified the access … I’m hungry to hear music. I was only home for a couple of days last week, and I went to the Miller Theater and heard all these pieces that John Zorn wrote, then the next night I was like, “Oh God, Ambrose Akinmusire is playing at the Vanguard — I’ve got to go there.” So I went to hear Ambrose at the Vanguard. It’s super-inspiring. It can be overwhelming, too, because I have to be careful to make sure I sit at home for a few minutes every once in a while, too. I’m at that kind of sweet spot right now, just being super fired up about being in New York, getting to hear so much stuff. Then also, if I have to do a recording or something, everything is right there in town.

I’m talking about New York, but I seem to be travelling more than ever. I hope I’ll be home someday.

This interview was first published on Qwest TV in April 2019.