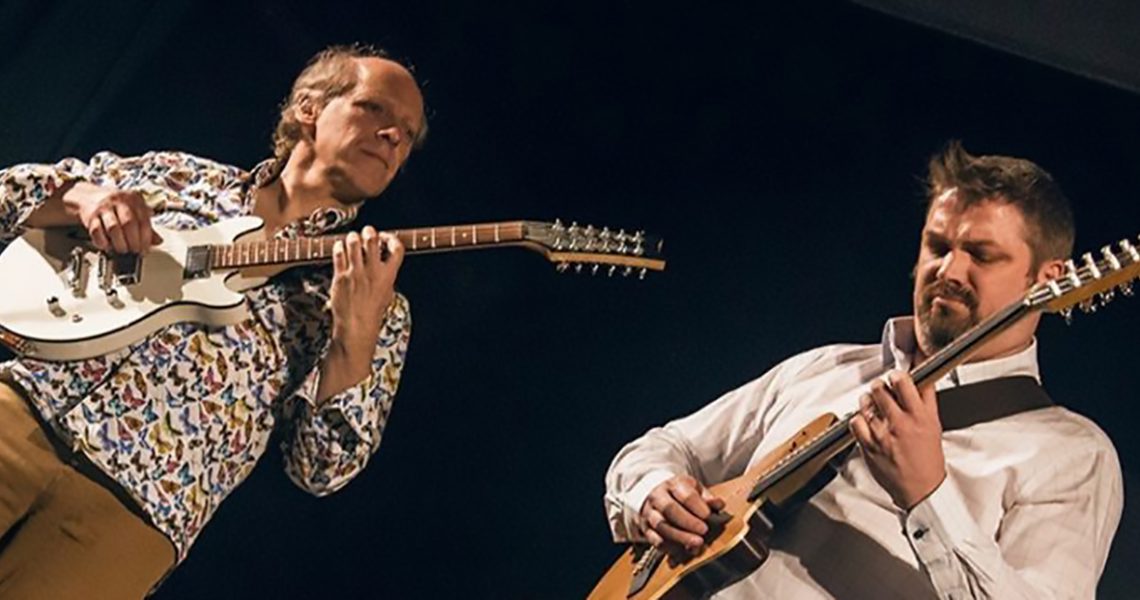 Guitar Duo Pete Oxley and Nicolas Meier have been touring the UK in support of the release of their latest album “the Alluring Ascent” released in March of this year. This coming July the Duo will shift focus to the continent with a number of live shows in Paris.

Seeing this duo live, listeners can expect a dazzling display of contemporary fare, ranging from Turkish panache to soundscapes of Latin America to English pastoralism. Hear this played on nylon string, steel string, electric, 12 string, fretless, slide, guitar-synth, glissentar guitars and more. For their live gigs, the Oxley-Meier Guitar Project aims to entertain by playing with a spontaneity and an intuitive interplay between them that keeps them fresh and fired up from gig to gig. The duo, therefore, comes to the performance with what they hope is the audience’s anticipations: to expect the unexpected!

Pete Oxley began his musical career in Paris in the mid-’80s before relocating to the UK in 1997. Shortly afterwards he opened The Spin jazz club in Oxford which in 2012 won the Parliamentary jazz award as ‘The Best Jazz Venue In The UK’. Pete regularly performs with some of the world’s leading jazz artists including Chris Garrick, Gilad Atzmon, Tim Whitehead, Dave O’Higgins, John Etheridge and his own band Curious Paradise. He has now released 14 critically acclaimed CDs featuring his original compositions. As a composer, Pete was selected as one of only a handful of British jazz musicians to have his compositions included in the definitive ‘European Real Book’.

Nicolas Meier’s unique style is a blend of Metheny-esque jazz and Turkish inspired world music, Nick has toured extensively around the world with his band the Meier Group. This wonderful band (featuring sax maestro Gilad Atzmon and Dave O’Higgins) won the overall prize for ‘best band’ at the Juan-les-Pins jazz festival. In addition, Nick was the guitarist in guitar supremo, Jeff Beck’s band, with whom he toured all over the world, performing at major venues and festivals. He has recently recorded a stunning album with the A-lister rhythm section of Jimmy Haslip (Yellowjackets) and Vinnie Colaiuta (Sting, Frank Zappa etc.).

For the concerts in France Oxley and Meier will be joined by a French rhythm section including Etienne Brachet, drums and José Fallot on bass.

More Information about the Oxley – Meier Guitar Project can be found here.