Orlando Julius is an illustrious and veteran Afro-jazz, Afro-soul, Afrobeat saxophonist from Nigeria leading The Heliocentrics, a younger generation neo-psychedelic jazz groove and funk collective from London, led by drummer Malcolm Catto. In the same vein as Fela Kuti at this peak with Africa 70 and their 1970s recordings in Los Angeles, Orlando & The Heliocentrics are a sheer unstoppable force. 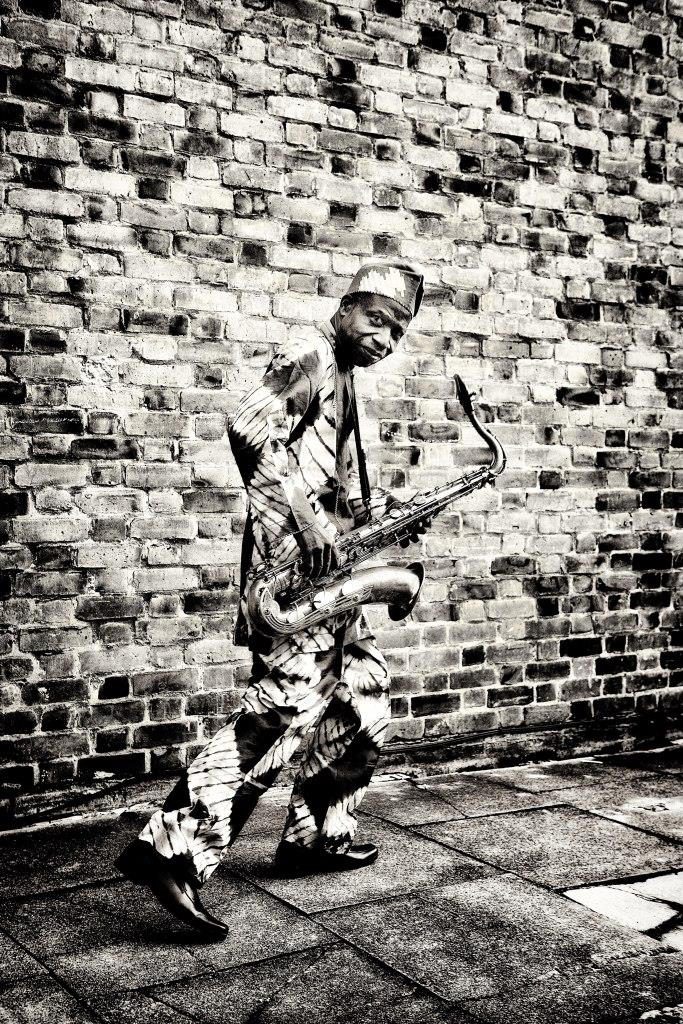 Orlando Julius recorded “Jaiyede Afro” (Strut Records) with the Heliocentrics in 2014, and while he has recorded a few others since then with other musicians, and he has under his belt an extensive 50-year-plus recording career in Africa and the West, this one recording on Strut with The Heliocentrics can be safely placed among his best to date, a complement to his Super Afro Soul classics from the 60s.

Sometimes it just comes down to the electricity or chemistry between a well-seasoned, solid back-up band and the leader to push each other to extraordinary sessions, from Fela Kuta & Africa 70 with Tony Allen on drums, to James Brown and the JBs with Jabo Starks or Clyde Stubblefield on drums.

Similarly to iconic back-up groups like the JBs, or Dylan’s The Band, The Heliocentrics can be and are also an independent group on their own terms, and tend to support major figures, usually pioneers in music including the Persian/Afghan jazz expert and saxophonist, Dr. Lloyd Miller, and Mulato Astake (the Godfather of Ethio-jazz), and most recently Melvin van Peebles director, poet and soul-funk music composer of the underground (Blaxploitation classic) “Sweet Sweetback’s’ Baadasssss Song” (1971).

Under the lead of Mulato Astake, they created a post-modern ethio-jazz with production as dope as any of the best by Bill Laswell. The Heliocentrics have had similar success with exceptional chemistry for collaboration with Orlando Julius, who is considered a pioneer of Nigerian Afro-soul, Afro-jazz and Afrobeat, second only to Fela Kuti and his former drummer, who is still musically active, Tony Allen.

A contemporary of Fela Kuti’s in Nigeria, both getting started in the early 1960s, though the two never played together; however, some players from Orlando’s groups also played with Fela, while Orlando at the time kept his music on the safer side—pure dance floor gems without the protest and political fury of Fela. He did, however, play with Hugh Masekela while he was living in the United States in the 70s.

Among his standouts from the singles recorded throughout the 1960s, released later on “Super Afro Soul” or “Afro High Life Classics” there is “My Girl” (a smooth Afro-soul remake of the Motown classic by Smokey Robinson), “Psychedelic Afro Shop,” “Topless,” and “James Brown Ride On.”

While Orlando claims on his website that his original Afro-soul recording “Ijo Soul” which was released as a single in 1964 is the prototype for James Brown’s “I Got You (I Feel Good)” which was released in 1966, it seems more accurate that if there is any later American hit song that more obviously took or stole the heart and melody of “Ijo Soul,” it is the soul and R&B duo Sam & Dave’s “Hold on I’m Coming” released in 1966 on Stax/Atlantic, and credited to Issac Hayes and David Porter.

Catto has said that one of their influences preparing them for sessions before the recording of “Jayjede Afro” with Julius Orlando was the Psychedelic Aliens from Ghana, a ‘70s blend of Afrobeat, Funk, Soul and Pop or as they called it at the time, Psycho African Beat. However, if Fela’s London Scene had ever had the chance to merge with Ginger Baker’s Airforce (and in London, not Lagos), this titanic sound would be much closer to the mark that Orlando Julius and The Heliocentrics can create together.