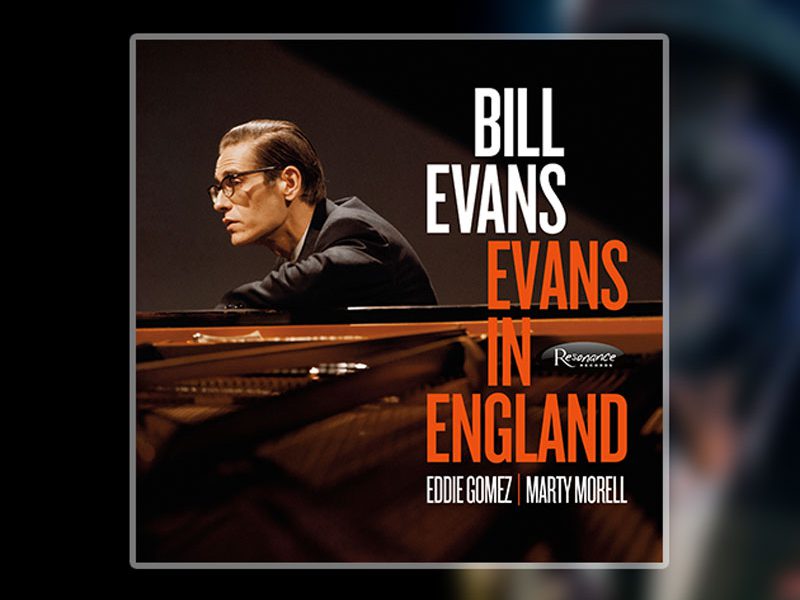 Resonance Records, recently announced that it will issue Evans in England, a vibrant, previously unreleased set of recordings featuring music by Bill Evans with bassist Eddie Gomez and drummer Marty Morell captured during an engagement at Ronnie Scott’s celebrated jazz club in December 1969.

The album will include extensive liner notes including essays by producer and Resonance co-president Zev Feldman and jazz writer Marc Meyers; interviews with Gomez, Morell, and filmmaker Leon Terjanian; and rare photos by Chuck Stewart, Jean-Pierre Leloir, and Jan Persson.

Evans in England succeeds a pair of widely acclaimed Evans releases from Los Angeles-based independent Resonance that featured the pianist’s short-lived 1968 trio with Gomez and drummer Jack DeJohnette: 2016’s collection of lost studio sides Some Other Time and 2017’s set of Dutch radio recordings Another Time. The latter release was named one of the year’s top historical releases by DownBeat, JazzTimes, the U.K.’s Jazzwise, and the NPR Music Jazz Critics Poll.

In 2012, the label released its first album devoted to unissued music by the pianist, Bill Evans Live at Art D’Lugoff’s Top of the Gate, a set of two never-before-heard 1968 concerts from the Greenwich Village club featuring the trio with Gomez and Morell recorded by Resonance founder and co-president George Klabin when he was just 18 years old.

Producer Feldman says, “It’s very exciting for Resonance to be collaborating on our fourth project together with the Evans Estate. These are really extraordinary recordings that represent Bill at his very, very best, and document the great art and chemistry that existed between these three gentlemen — Bill Evans, Eddie Gomez and Marty Morell — captured just a year into what would go on to become Bill’s longest-lasting trio.”

As has been the case with some of Resonance’s other collections of rare and unheard jazz, the music on Evans in England arrived at the label’s doorstep via a bolt out of the blue: an unexpected email to Feldman from a man who said he was in possession of some previously unissued Evans recordings.

The gentleman in question was Leon Terjanian, a friend and devoted fan of Evans who had filmed the pianist for his documentary feature Turn Out the Stars, which premiered at the Montreal Jazz Festival in 1981.

Through the late Francis Paudras, the famed biographer of jazz piano titan Bud Powell, Terjanian had made the acquaintance of a French collector who chooses to identify himself only as “Jo.” A similarly ardent admirer of Evans’ playing, Jo had tracked the keyboardist across Europe and even captured his trio’s sets at Ronnie Scott’s.

Evans discovered Jo’s surreptitious recording activities (which employed a small portable machine), but the musician grew comfortable with his presence, and he allowed his dedicated fan to tape his performances.

In July 2016, Terjanian received a phone call from 84-year-old Jo, who said he wanted to see his Evans recordings issued to the public before his death. That communication prompted contact with Feldman at Resonance. Arrangements were made with the Evans Estate for a legitimately licensed release of the material, with tracks selected by co-presidents George Klabin and Zev Feldman.

Marked by the already empathetic interplay of Evans, Gomez, and Morell, who would perform together for nearly seven years, Evans in England is an exceptional recital that encompasses energetic renderings of such timeless compositions as “Waltz for Debby,” “Turn Out the Stars,” “Very Early,” and “Re: Person I Knew”; extroverted readings of Miles Davis’ “So What” (which Evans originated with the trumpeter sextet on the 1959 classic Kind of Blue) and Thelonious Monk’s “’Round Midnight”; and Evans’ earliest recordings of “Sugar Plum” and “The Two Lonely People.”

Feldman says, “Bill Evans is an artist who continues to inspire us, all these decades later. I still hear new things in his music upon each new listen, and to find an unearthed set of concert recordings such as these is a cause for widespread joy and jubilation to break out among Evans fans and jazz fans everywhere.”

Looking back on the experience of playing with Bill Evans, Gomez says, “He wanted us — me — from the very beginning to just go out there and play and make music, and as long as there’s a lot of integrating and honesty and devotion to what we’re doing, he was fine. He never put any parameters, or kiboshed anything. So it was an invitation from Bill to try stuff and be creative, and I certainly took the bait.”

Morell adds, “It was challenging, inspiring, and just kind of brought the best out of me.”