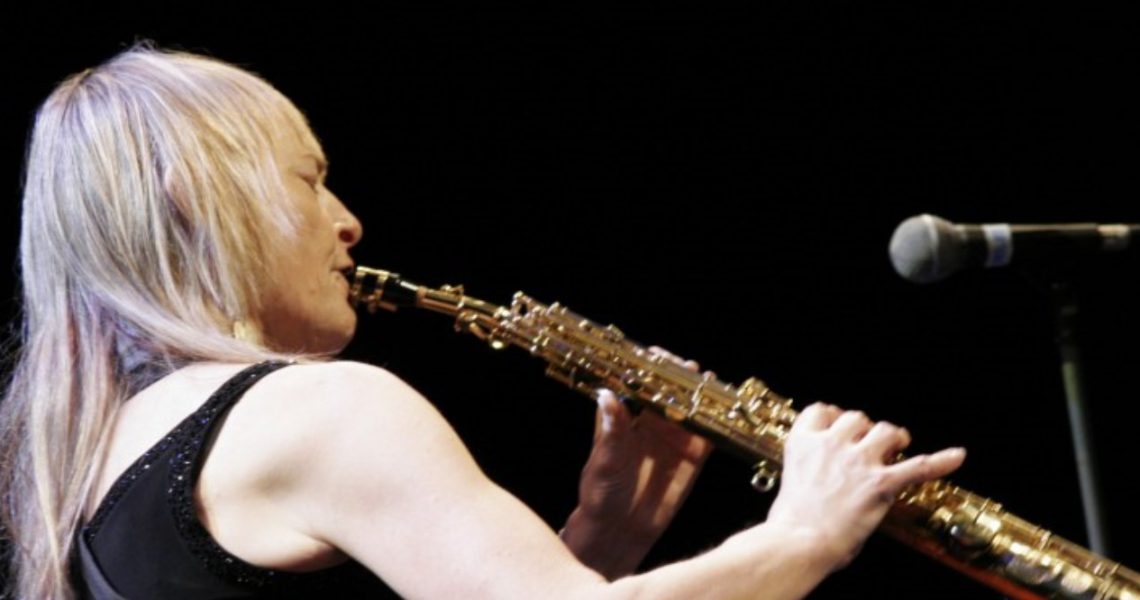 Barbara Thompson writes and performs for the saxophone like no other. With love and unwavering respect, she cherishes the instrument when needed, challenges and pushes it beyond boundaries and shows us that in the right hands, the saxophone really is truly magnificent.

Barbara Thompson MBE is an incredible artist whose career has spanned five decades and is still going strong, despite her battle with Parkinson’s Disease. I recently interviewed Yazz Ahmed, who selected Barbara Thompson as one of her role models for her ‘Polyhymnia’ piece and I can completely understand why. Awarded an MBE in 1994 for services to Music, Barbara’s career has taken her everywhere and at the age of 74, there are no signs of her slowing down and she is as strong as ever in many ways. She officially retired from performing and last performed in 2015 but continues to be a prolific composer.

Talking to Barbara, you get an overwhelming sense of an inner feistiness driven by passion and absolute and pure love of the saxophone. Every question I asked, every topic, was answered with her saxophone at the heart of her response and I don’t know many people who would just pick up Stan Getz’s instrument without asking:

BT: It’s very difficult to find your own sound. The saxophone is quite easy – well it’s easy to have your own sound but it’s not easy to get a good sound. When I was in my twenties, Stan Getz was playing at Ronnie Scotts. I saw his saxophone lying on the desk, and I thought I must try it…..so I picked it up and blew a few notes on it. It sounded just like Stan Getz. He had set the mouthpiece up to make it all woofy – you know that lovely woofy sound he got. He heard me playing and he came in and he said, ‘what do you think you are doing?!!’ He was very annoyed with me.

She famously got sacked from Harold Prince’s production of Cabaret in London (Judi Dench was the lead) in 1967 which she explained that only the other day she was discussing with Andrew Lloyd Weber. Finding and developing her own sound was a passion for Barbara very early on.

BT: I wasn’t used to being told what to play. If I played one note of improvisation, I was set upon – they didn’t like me changing anything – and to play the same notes every night was just murderous, it was very claustrophobic. I booked a dep (replacement) one night, as I was doing a gig with the New Jazz Orchestra, which seemed more important – but I was hauled up – it was like being at school – and I was fired. Someone had squealed on me! I went and did a season with an all-girl group with Ivy Benson, and my sound was so awful. I was playing the saxophone like a clarinet as the clarinet had always been my first study.

When I took the sax up, I tried to blow in the same way but the embouchure is quite different. There was another girl there who was also new to the big band sound, and she made an awful noise too. The two of us were caterwauling. I don’t know how Ivy Benson stood it. Anyway, I thought I must do something about my sound. I went and had a lesson with Chris Townsend (father of Pete Townsend) and when he played, his sound was fantastic, and I got inspired by that and I practised for four hours every day.

Her vast career has seen her perform, compose and lead on many projects including The New Jazz Orchestra, The United Jazz & Rock Ensemble, Jubiaba, Paraphernalia, Andrew Lloyd-Webber productions, Colosseum to name a very small few. She is considered a pioneering composer for the saxophone. But when you speak to Barbara, she is incredibly humble, and you get the impression she doesn’t fully realise the impact she has had and the amazing work she has achieved – especially as one of the few ‘known’ female saxophonists/composers:

BT: When I first started doing music seriously, I played the clarinet, as my first study at the Royal College and there were hundreds of clarinettists, and there was no future in playing the clarinet unless you were the bees’ knees. When I first started actually working, I was flavour of the month… and then I wasn’t flavour of the month…. I was trying out different types of music – bubble and squeak – which I couldn’t stand myself, but it was the vogue. When I was playing to six or seven people in jazz clubs, I thought it was time to make a change. The group I was playing with at the time were very loyal and they went with me when I changed. I was the only female, in the jazz world and the press went mad. They took pictures of me, everywhere, and I got very good publicity. I was asked to go to Barcelona to represent a big band and I was the only girl there – a 50-piece band and this sort of thing happened all the time – but I never thought twice about it. I kind of took it all for granted but now when I look back – my stepfather gave me books with all my press and reviews etc. and it’s full of stuff, it’s incredible. 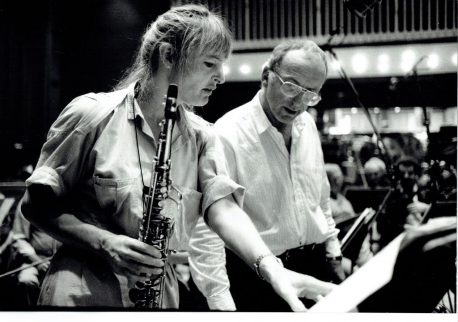 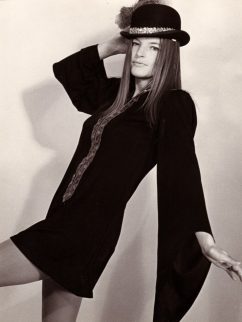 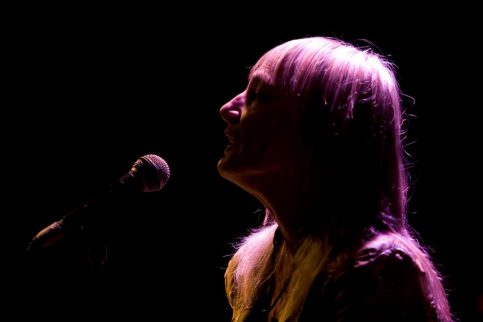 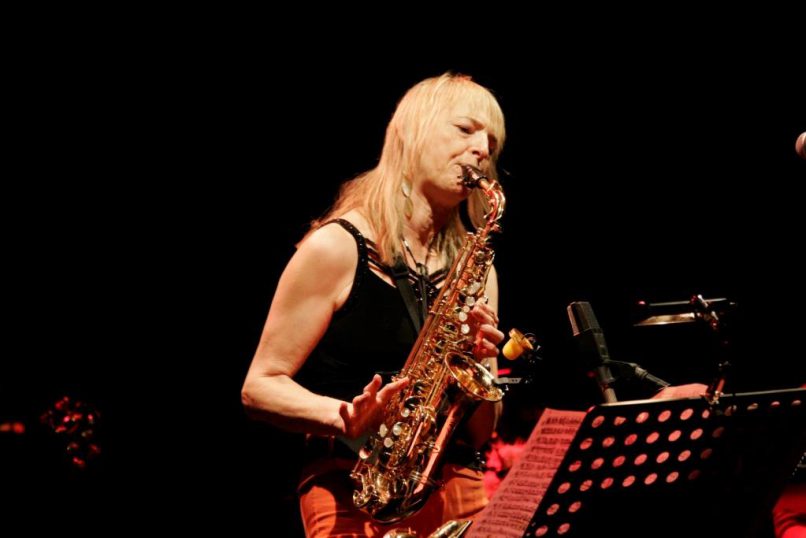 We discussed the current debate about the lack of ‘known’ female saxophonists and other instrumentalists and how things appear to be changing and that women are starting to get equal recognition – slowly.

BT: When I joined the new jazz orchestra, it was so weird. I was given a solo and it went down so well and that led to other things and then suddenly from being totally unknown, I was being plastered all over the newspapers. But I hadn’t done anything! I was only a kid – I was 20 when I started getting spotted. But I had my husband to thank for a lot of things – he protected me from getting involved in the wrong part of music which depends on your looks and commercialism. There’s no future in that. Once your looks are gone – pop music takes a different direction – you’re finished.

I don’t think you’ll get anywhere with playing covers. It’s best to play original music because that helps you with an original sound – the writing together with the sound you make on your instrument. Some people have a marvellous sound and that’s the most important thing. I write music for instruments that I understand.

I think you have to be very careful. Because also playing music that has been very successful in the past, can be very dangerous. Because you are playing them, you’re using them to get through to an audience rather than something that’s original to you. Coltrane, I always found a wonderful player, and he was what started me off. When I first started there was only record players, so the only way I could practice was, I had albums, I would play a solo and slow it down to 33 and learn it, write it out. And there was a song ‘Moon ray’ – had a fantastic solo and John and I would sing it while we were driving, sing the solos together.

Barbara’s husband Jon Hiseman, sadly passed away in June 2018, and there is an incredibly moving documentary about how Jon and Barbara tackled – with incredible strength – her Parkinson diagnosis. Having met in 1964, it is very clear that Jon and Barbara were as one. We discussed this connection and the impact Parkinson’s has on her music.

BT: We were a whole person when we were working together. I can’t believe he is not here. Since he died, I haven’t had the heart to do a lot of the creative stuff that I would normally do. But I’m coming out of it gradually. And I’ve got a lot of music that I’ve got to get played.

I never thought of hanging my saxophone up and I last played in 2015. If I get some better drugs I might play again – you never know what is going to happen. One time, the drug I was on, was an injection in the stomach, and we didn’t tell the boys in the band about my situation, but my sound engineer saw me just as I was having my injection – so we had to tell him that I wasn’t a junkie! Another time, one of the drugs I was taking made me feel very sick, and one concert, which was sold out, I was being very ill. I just had to grit my teeth. There was a bucket beside the stage, and I was sick just before I went on but when I played it was alright – and the gig went down very well. It’s like everything really, you just carry on working.

We discussed the current industry and social media etc. and Barbara’s passion and enthusiasm for sharing her music is clear.

BT: There’s a website with all my music on it that people can download. This is a good thing as I don’t charge. I look on YouTube sometimes and see people have obviously downloaded my music, which is very nice. I think social media is very good. It means I can access an instrumentalist and see concerts and hear music that one wouldn’t normally be able to do. I think it’s a very good thing. The rubbish gets sorted out. There’s a lot of stuff that shouldn’t be there – but who I am to say? They probably think what I write is rubbish.

There is so much that could be discussed and written about this incredible artist (a book is well overdue). I had the most wonderful conversation with her. Barbara is passionate, warm, feisty, incredibly talented, humble – so inspiring. I would like to end this article on her words, not mine. I asked her if she had any particular career highlights:

BT: I loved it when I played with Colosseum in Italy because afterwards, I had all these Italians coming up to me and kneeling down. That was so sweet. And after when I played a ballad, that I wrote for my daughter, we made the audience cry, which I didn’t realise. I like it when people thank me for my music that’s so very nice. And people, they play my music at funerals and weddings and that’s the nicest thing. To have people say they love your music. That means a lot.