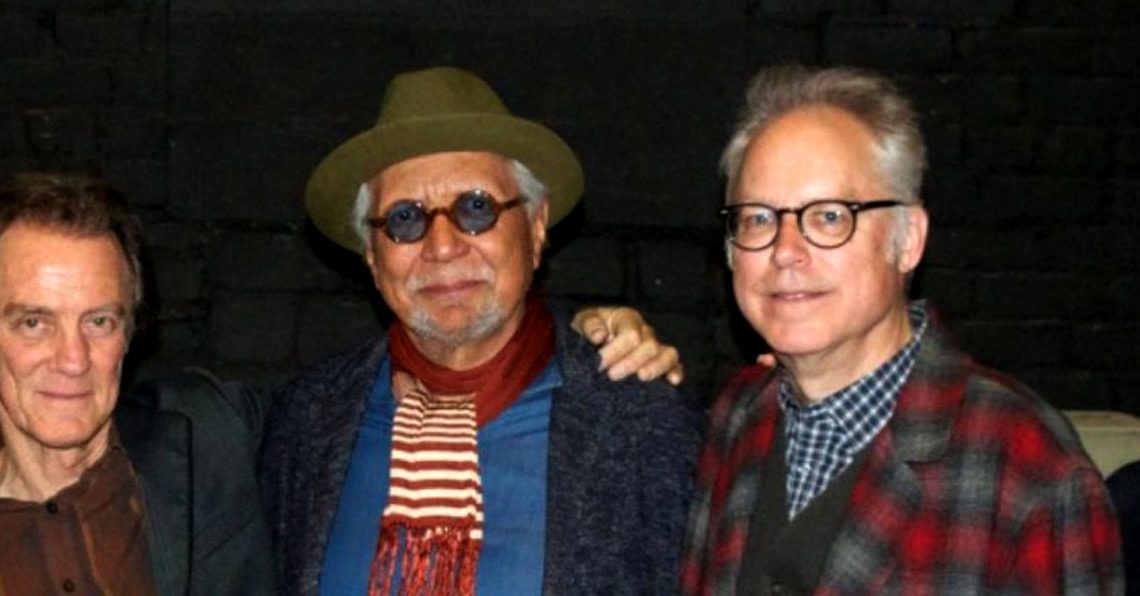 Tenor titan, bandleader, and composer Charles Lloyd has played with everybody from Cannonball Adderley to Howlin’ Wolf. He is a leading figure on the ever-evolving jazz scene today, performing with the energy of a young man, and continuing to celebrate his 80th birthday in Rose Theater on December 14-15.

The band consists of Lloyd’s longtime rhythm section of bassist Reuben Rogers and drummer Eric Harland – tight as a drum! They are joined by pedal steel guitarist Greg Leisz. This group is explosive and unpredictable, led by a seasoned veteran, NEA Jazz Master Charles Lloyd. “Life is school and I have been blessed to work with so many great musicians. Each step and every experience is a part of who I am today,” Charles explained to me.

The December 14-15 Charles Lloyd 80th Birthday Celebration is an ongoing work of art, “My actual birthday was on March 15th. It is a celebratory 80th year for me. This music is our indigenous art form – it is a living art. It has always been my inspiration and consolation – I hope I can do the same for others. I am in service,” he solemnly responds.

Born in Memphis, Tennessee in 1938, Lloyd says, “When I was in the 4th grade in Memphis, I heard Willie Mitchell’s big band and it was like a thunderbolt to my heart. They were standing on the shoulders of Jimmy Lunceford and Duke Ellington, but a little more modern – like Dizzy Gillespie’s big band. At that time, I had wanted to be a singer, but hearing Willie’s band encouraged me to appeal to my parents to get me a saxophone. My mother finally relented when I was 9.”

His mentor was pianist Phineas Newborn. By the time he reached 12 years old, he was already playing as a sideman in the blues bands of B.B. King, Howlin’ Wolf, and Bobbie “Blue” Bland. In high school, he was best friends with trumpeter Booker Little.

Lloyd moved to Los Angeles, California in 1956 where he hooked up with folks including Gerald Wilson, Billy Higgins, Don Cherry, and Bobby Hutcherson. As his career progressed, he joined the bands of Chico Hamilton and Cannonball Adderley. His sidemen included Herbie Hancock, Ron Carter, and Tony Williams. In 1969, Lloyd led a quartet with Keith Jarrett, Cecil McBee, and Jack DeJohnette. This band was ahead of its time, becoming the first jazz band to play at The Fillmore, a legendary rock venue. It is during this time that Lloyd played with the Doors, Canned Heat and The Beach Boys. He adds, “When I lived in Greenwich Village, Jimi Hendrix used to perform down the street from my apartment. We became friends and had always planned to do something together – but time ran out.”

The quartet disbanded in 1970 and Lloyd took a leave of absence. Recovering from a near death experience in 1986, he was inspired to return to music; touring and recording for the highly respected ECM label. Lloyd is now with the Blue Note label and his 2017 Passin’ Thru release was recorded ‘live’ at the Montreux Jazz Festival and in Santa Fe.

Today, Charles Lloyd is getting much-deserved attention from the jazz press and the audiences that are lucky enough to catch him in action. Jazzwise added “ Lloyd – is now probably the legend of sax to see live…”, Carlos Santana chimed in saying, “Charles Lloyd is an international treasure”, and The New York Times raved, “Follow the career of Charles Lloyd, and you see a map of great jazz across half a century. His shows, full of momentum and intuition, perfectly represent the idea that the best jazz needs to be experienced live.”

Special guest guitarist and old friend of Jazz at Lincoln Center, Bill Frisell, can’t wait to present this show to you, “When I was in high school I bought my first Downbeat magazine. Charles Lloyd was on the cover. I wanted to hear what he sounded like, so on January 19, 1969, at the Denver Auditorium Theater, I went to hear his quartet with Keith Jarrett, Ron McClure, and Paul Motian. My mind was blown and my life was changed!
I’ve been a big, big fan of Lucinda Williams for a long, long time.
She is a poet and a singer. Charles Lloyd is a poet and a singer. They are my heroes. Sometimes I think I must be dreaming,” expresses Frisell.

Lloyd is proud of this new project, “We recently released a recording Vanished Gardens. It is a collaboration between The Marvels; Bill Frisell, Greg Leisz, Reuben Rogers, Eric Harland and the singer-songwriter/poet, Lucinda Williams. The voice not only adds another instrument to the ensemble but with Lucinda, we also have a great poet singing to us. We have an intuitive, connection… it’s an unprecedented collaboration.”

Three-time Grammy® Award winner Williams was born in Lousiana and now has three decades of music under her belt. Her 2014 reissue of Rough Trade earned high praise from the critics, including Jim Farber of New York’s Daily News who hailed the reissue by saying “Listening again proves it to be that rarest of beasts: a perfect work. There’s not a chord, lyric, beat or inflection that doesn’t pull at the heart or make it soar.” Another 2014 Williams release is her first double studio album Down Where The Spirit Meets The Bone. Last year, Williams was awarded an Honorary Doctorate of Music from Berklee College of Music during the 2017 Commencement Concert and Rolling Stone named Williams one of the 100 Greatest Country Artists of All Time. She has gained a cult following and fits into this Rose Theater performance perfectly.

Of this current Charles Lloyd tour, DownBeat magazine recently wrote, “Concert-goers again were reminded that one of Lloyd’s truest virtues, at any stage in his career, is his ability to ‘sing’ through his instrument.”

In conclusion, Charles Lloyd leaves us with these simple words: “Go forward in love.”