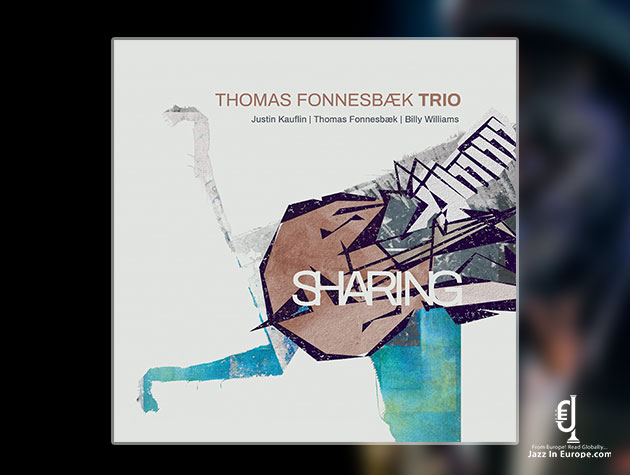 Thomas Fonnesbæk and Justin Kauflin are ready to follow up on the critically acclaimed album Synethesia from 2017. This time they are joined by Billy Williams on drums, making this a trio record.

The album, entitled Sharing, was recorded in November 2017 in Gothenburg, Sweden. It consists of 10 tracks, with the majority of tracks composed by Fonnesbæk, alongside one improvisation and a rendition of the classic track Inception, written by McCoy Tyner. On Sharing, the trio exemplifies the fact that jazz has never been a more international art form than it is today, and that new generations continue to set their own fascinating imprint on the music.

Danish bassist Thomas Fonnesbæk is a fascinating musician who exudes technical brilliance and a superior sense of rhythm, as well as a melodic and harmonic sensitivity reminiscent of Niels-Henning Ørsted Pedersen that never overshadows his own unique style. Justin Kauflin is one of the great piano talents of recent times. Renowned trumpetist Clark Terry and Quincy Jones has both taken the young prodigy under their wings, playing a crucial part in his success. The maturity he displays and focus with which he plays is exceptional. Billy Williams is the childhood friend of Kauflin and has worked professionally with a long list of great jazz musicians such as Christian McBride, Larry Willis, Steve Wilson, Benny Golson and Ellis Marsalis Kauflin and Fonnesbæk met for the first time when they were put together for a show at Montmartre in Copenhagen. Kauflin was so impressed with Fonnesbæk, that he invited him to go on tour with him in Europe and Asia.

Both Justin Kauflin and Thomas Fonnesbæk perceive music as colour, a form of synesthesia where one sense stimulates another. It is an aptitude that permeates this record and boosts the level of interplay to new heights. As a result, almost everything is possible and the music becomes boundless when Kauflin, Fonnesbæk and Billy Williams let themselves go. In all of this, Williams plays a major role. His style, at once powerful and sensitive, binds the music together while giving it the groove to constantly propel the group forward. Great art gets us to forget daily life for a moment. It makes us aware of our feelings, our senses and intuition. In the case of jazz, it’s about our being forced to be in the present. At its best, jazz takes us on a creative journey where the musicians are what they do, and do what they are as they merge with their art. When this happens it’s as though the harness of rationality is loosened, giving room for our consciousness to expand while making life look a little bit brighter. Sharing is a perfect example of three musicians doing just this.