DCH: Where are the members of the KneeBody band located these days, are they all in New York City?

BW: They are all over the place, our band has always been all over the place and then we just get together for tours. So at this point, there’s just me and the drummer in New York, the bassist is in LA, the trumpeter is in Denver etc,

DCH: Along with Kneebody and Your other groups and projects and teaching you’re also known for working in classical music world correct?

BW: I don’t play classical any more. I was raised basically in a classical family, my mom was an opera singer and my great aunt was a piano player that went to Juilliard, my grandmother was a flautist although she chose not to per-sue that career she played under Toscanini in an Orchestra.

So yeah I definitely started that way, I was playing classical sax in a wind ensemble and bassoon in an orchestra. I mean I love that field and I love that music and it just naturally ended up being a part of how I play, how I practice and how I write too. People point that out a lot when they give me feedback on whatever is “My Sound” you know it’s clear to me that that’s part of my sound whatever is that blend of classical and jazz influences.

DCH: How important is to develop your own sound and find your own voice on an instrument like saxophone, an instrument that has been heavily influenced from the signature sounds of people like Charley Parker, Coltrane and the other legends?

BW: I personally think that the best way to find your voice is to not look for it, and what I mean by that is that actually I think everybody already has their own voice BUT it’s sort of like that metaphor, you know for example there’s this really beautiful quote attributed to “Michelangelo” about when they asked him about creating those really beautiful marble statues (I’m sort of paraphrasing here) but he talks about how he would look at a block of marble and he would already see the statue inside, and all he had to do is remove the excess marble to reveal the statue. So I think literally per-suing excellence in music and becoming really good on your instrument will naturally reveal who you are!

I think also in a place like New York, for example, there are all of these very strong individual voices pushing up against you so in order for you to create your own space that environment really forces you to define yourself because there’s pressure coming from all different sides! I understand the history and that people want to define you so it is what it is, it’s very human that we want to catalogue and categorize because it’s more comforting to have that sense of the passage of time. So in the end, nobody is going to sound like you!

DCH: I read that you have a background in teaching music, being an adjunct professor at USC and more recently teaching in New York along with numerous masterclasses.

BW: Well Yes, but you’re actually catching me at a transitional time, I’ve kind of become basically too busy to teach at least in the sense of being an adjunct, so basically now I’m doing some masterclasses at universities and or certain select summer teaching workshops. Like for example I’ve taught regularly at an international jazz workshop in Siena Italy for four years and actually I’m in the process and about halfway through of producing a series of teaching videos where I’ve basically included everything I’ve learned in the last couple of decades into teaching segments and I’m going to be offering those on my website at www.benwendel.com

DCH: Awesome news for your students and saxophone players and such a great resource for them!

Let’s talk about your newest soon to be released album “The Seasons” on Motema Records. Originally this was a series of twelve different videos of duos with well-known guest artists inspired by Tchaikovsky’s “The Seasons” collection first released on YouTube one video a month in 2015 correct? What was your motivation for this large undertaking? 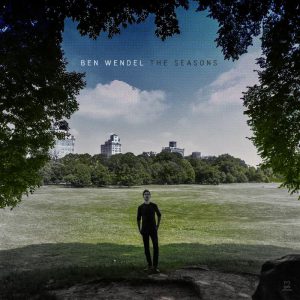 BW: Well, A couple of things, at the time I was really enjoying this blog by a guy named Bob Lefsetz. I always found that he’s ahead of the curse and he’s always looking at new technologies and new ways that artists are using those mediums to share art. I remember around that time that he was saying that was the way things were heading that we were moving away from what we would call the traditional album and the way that artists share art is going to become more and more of an ongoing progress where they release art in smaller chunks, but it’s more constant

DCH: Do you think that social media and outlets like YouTube have played a big part in this new approach?

BW: Yes so I really thought that was interesting, he was basically saying, music is turning into more of a streaming service format and thus the art is going to mimic that so that was on my mind and then right around that same time my girlfriend who’s now my wife, she’s a piano player and she showed me those Tchaikovsky Seasons pieces and what I found so interesting was those that those 12 pieces that Tchaikovsky wrote were actually for a music magazine in back in 1876. So, they said to their subscribers that If you subscribe to our magazine every month, you will get a new composition by Tchaikovsky.  He’s going to like write them for you haha!

BW: Totally! So I thought that’s so cool, I wonder if there is a way that I can do an update of that idea. Also, I started to notice my own personal trend…which was very often when people would tell me about new music the first place I would go to is YouTube instead of iTunes to check it out!

So basically, that’s kind of what happened. I was really inspired by those pieces and I said Ok, I’d like to do sort of a modern update of that idea… I’m also going to call it The Seasons, and I’m going to do a 12 month series that will be like an art for art’s sake thing, and I will feature 12 musicians that I really admire and it will be jazz, but it will have almost like a chamber feeling to it like a classical feeling or element to it where they’ll definitely be a heavy compositional element to each piece.

DCH: I really like the way that you approached the video series, the whole presentation, the way it was filmed, it does feel very stripped down which I thought was very interesting.

BW: That was really fun too, I have been working the same video director this whole time Alex Chaloff I think he’s just an incredible talent. He’s so beautiful at capturing this kind of music, and so when I said to him that this is what I want to do and I would love for you to be on board for the whole thing he said absolutely. What was really fun too was for each duet to really think about ok, what is the space going to be and how can that enhance the experience of the duet itself. There sort of little vignette stories in a way.

DCH: What was the process like getting the other musicians involved when you approached them with the idea, was it quick yes or that’s interesting, how did that go?

BW: It varied, because there were people that were sort of my generation that I think kind of understood immediately what I was going after visually and reaching out to an online audience and there were people just a hair older that were sort of right on the edge so for them I wanted to say this is what I’m doing and this is why it’s cool.  And then, just dealing with schedules! I mean you just don’t call up Joshua Redmond and say do you want to Jam next week? It’s a process, so everything took some time.