His innovative video series “The Seasons” which is soon to be released as an album, and showcased on his upcoming tours of the United States and Europe.  I was fortunate to get a chance to speak with him at his home in New York in amongst his busy schedule.

Darrell Craig Harris: Hi Ben, great to meet you and thanks for taking the time to chat today!

Ben Wendel: Sure, my pleasure!

DCH: in my research, I saw that you’re originally from Vancouver, Canada then moved to Los Angeles?

BW: Yes, my mom was an American and my father was Canadian and they both worked down in LA so they brought me down there when I was like 1, so for all intents and purposes I am culturally American but I just happen to have dual citizenship.

DCH: oh ok, awesome! So you were in LA for how many years?

BW: All through growing up really and then I went to college in New York where I attended the Eastman school of music. Then I moved back to LA for a bit and worked professionally there.  Eventually, I permanently relocated to New York City and I’ve been in New York coming on 9 years now.

DCH: What part of New York City do you live in currently?

BW: This whole time has always been parts of Brooklyn, it just got a vibe to it you know!

DCH: What was your motivation to move to the city since you were already getting established musically in Los Angeles? 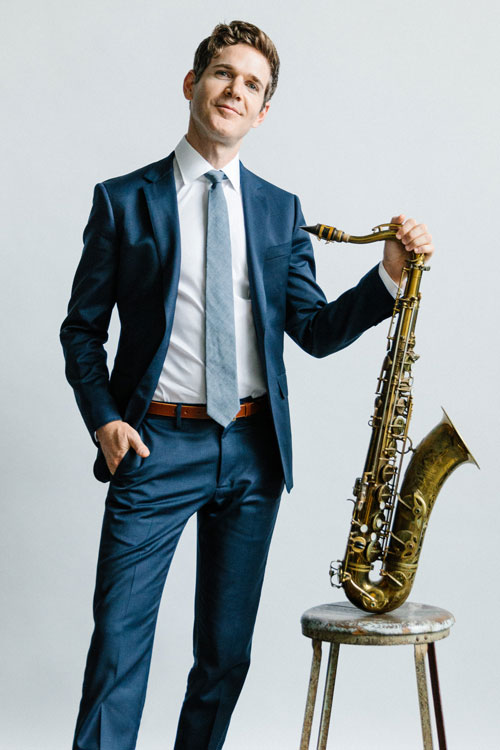 BW: Just the nature of the music I was playing the people that I was playing with, more and more was pushing me towards NYC…and then for travel too, so much of my current professional career is based on touring, and it’s music easier to get to Europe for example from the East coast. So, New York is just It’s a better hub for getting to all of these places.

You know there was a lot of different motivations, definitely that classic thing of always wanting to move to New York and experience the energy of that city and be a fish in a big pond of other jazz musicians.

DCH: You really get a chance to prove yourself against the leaders of the world of Jazz in that type of environment I would think.

BW: Yes totally, you get a sense of where you stand.  So, it’s been amazing.

DCH: When you first moved to New York, how did you integrate into the jazz scene there?

BW: Well, when I moved I already kind of had a career going, I already had been touring with Kneebody, I was touring with Tigran Hamasyan, and I was doing work with Gerald Clayton so I kind of already some things going so when I moved there I just sort of started working so it was a different experience then say moving there just after college or something like that.

DCH: You mentioned some of the artists and groups you had been touring with when you moved to NYC, how did the very successful “Kneebody” project originally come about? What were its origins?

BW: Most of the members of Kneebody, 4 out of 5 met at Eastman actually. We were going to school around the same time, really we met more just by coincidence after finishing school we all ended up in LA around the same time period. Our keyboardist had finished his master’s degree at Cal Arts where he met Nate Wood who eventually became our drummer. So it was just one of those things, it was kind of kismet you know. There was a new club on the west side of LA called The Temple Bar, they were looking to do a steady ongoing creative night on Monday’s and we got the slot so It just kind of happened on its own organically in a way!

I mean It basically started with friendship. You know, we were friends and we were like let’s play together, we already have some history from our time at Eastman and such. Then also the other side that was interesting (I can look back now and go oh ha ha) is maybe that’s why that happened because we were friends you know.

People often ask me how did you develop the sound of the band? We didn’t have any preset plan, however there’s this great excerpt in that David Byrne book “How Music Works” where he talks about how he has this theory (which I kind of agree with) which is that very often the sound of music in different eras is shaped by the actual space that the music was being created in.

So, it’s like there’s a reason that 17th-century choral music sounds the way it does because they were doing it in these giant reverberated churches and that really played a part in its creation and their approach!

DCH: So, in a way, everything around us is contributing to and affecting the sounds that inspire us and our approach to artistic creation or in this case the direction of the band’s music and vibe?

BW: Yes, but even more specifically not just the culture or the sounds of the time but literally space itself… like the fact that the church space they were working in had a huge reverb….would impact the pacing of how you would write. In that same way, at the Temple Bar gig in LA it was like a hip-hop rock club and we’re playing through giant JBL speakers, it was basically an amplified situation at all so it just made sense intuitively for example that we not going to use music stands because that would look dorky, and so I guess we’re memorizing the music, and I guess we’re going to write this kind of music because it seems to kind of feel better in this space we are in. It’s interesting, so that really kind of how it developed! Like if we would have ended up in like a more acoustic jazz type setting then maybe the sound of the band would have gone a different direction.