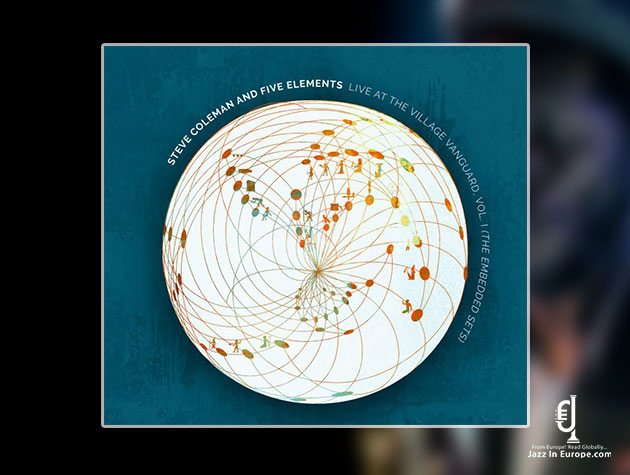 Alto saxophonist Steve Coleman’s Live at the Village Vanguard, Vol. I (The Embedded Sets) is his first live release in over 15 years. It captures his band Five Elements in two joyous sets at the historic New York venue where some of the most important jazz recordings have been made.

Coleman’s personal history is tied deeply with the club: One of the main reasons he moved to New York City from Chicago at the age of 21 was for the opportunity to play in the Thad Jones/Mel Lewis Orchestra (renamed the Mel Lewis Jazz Orchestra after Jones left at the end of 1978), of which he was a member from 1978 to 1980. Then, as now (under the name The Vanguard Orchestra), the band played at the club every Monday night and was Coleman’s first prominent professional gig in New York. After playing there with singer Abbey Lincoln in 1984, there followed a hiatus of over 30 years before he was invited to perform at the club as a leader in 2015, and he has led his band Five Elements there every year since.

Unlike his two most recent releases, Morphogenesis and Synovial Joints, both of which are highly orchestrated, Coleman’s recent goal has been to perform as spontaneously as possible and yet still retain form and structure. The melody of “Embedded #1,” for example, was composed in one extemporaneous moment, without any editing, and some pieces were composed live on stage at the Vanguard earlier in the week. Even the long-time staples of Coleman’s live repertoire (Bunky Green’s “Little Girl I Love You” and Doug Hammond’s “Figit Time”) were performed without preconceived notions towards form.

The musicians who appeared on stage, which also include Jonathan Finlayson on trumpet and Sean Rickman on drums, collectively have over 80 years of experience with Coleman’s music and they tackle Coleman’s typically intricate music with an effortless grace. The band’s mastery over the cross-hatching rhythms, tricky counterpoint and percolating grooves, all inspired by the magical vibe of the Village Vanguard, is captured here at its absolute peak.