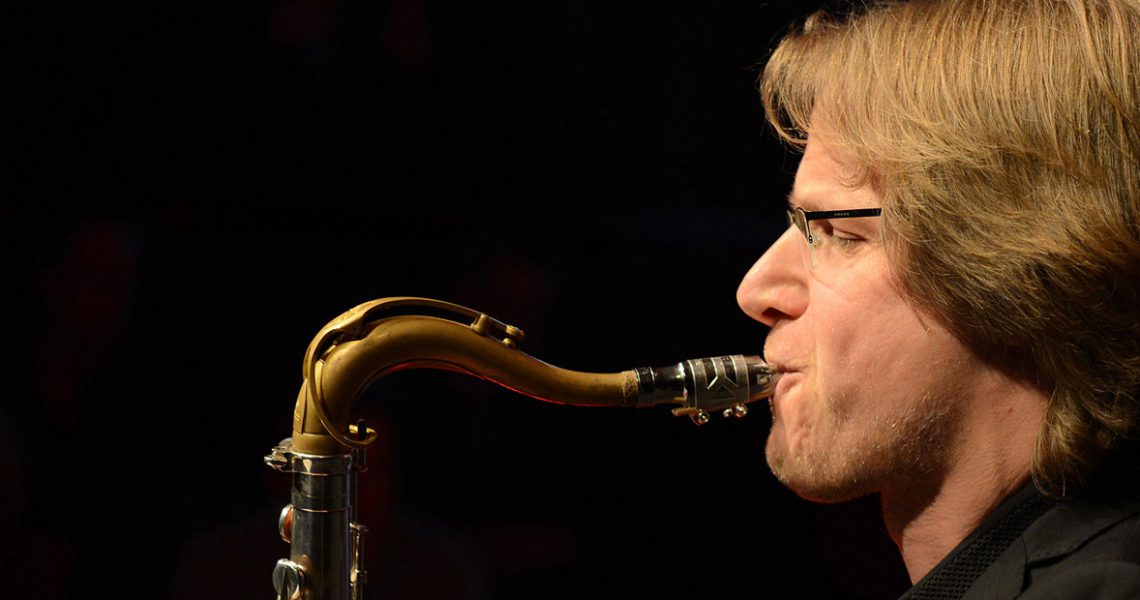 An interview with saxophonist Paul Heller

German based Saxophonist Paul Heller could easily rank as one of the most prolific jazz players on the European scene at the moment. At the age of 47 Paul has produced 11 albums as a leader, appeared on countless recordings as a guest soloist and sideman, has toured with an extensive list of some of the jazz worlds greatest exponents and has been a member of the world renowned WDR Big Band since 2005.

Paul’s latest release on the German label Mons Records titled “Paul Heller meets Roman Schwaller” has met with critical acclaim by both critics and contemporaries alike, Jazz In Europe included (see our album review here). As a producer, he recently co-produced together with his Wife, Dutch Vocalist Fay Claassen her latest CD “Luck Child” that received a Dutch “Edison Award”. In addition Paul is also the Musical director of the “Next Level Jazz” concert series in the Stadgarten in Cologne. With all of this in mind we thought it time to sit down with Paul and find out more.

Andrew Read: Your latest album as a leader with Roman Schwaller features two Tenor players. This line up brings to mind the classic albums by Johnny Griffin and Eddie Lockjaw Davis. I read in your biography that both you and Roman have both worked with Johnny Griffin, how did this come about?

Paul Heller: Johnny Griffin was an important mentor to Roman Schwaller and in the mid 80s Roman did a fantastic, very special project with Griffin, Sal Nistico and of course himself, called “Three Generations Of Tenor Sax”. Besides this, they both played several Quintet tours in Europe. In the late 90’s Roman wanted to do that (“Three Generations Of Tenor Sax” – ed) project again, this time with Roman being the middle generation and myself as the third generation.

AR: The press release states the albums “nine tracks equally reflect both the history and current state of jazz.” After hearing the album a number of times, I would agree with this. I’ve always said “It doesn’t matter where jazz goes as long as it takes the tradition with it”. How important is tradition in your music?

PH: Though I never tried to copy a certain “style” in jazz, it was and still is absolutely important to me knowing where all this comes from. Not only knowing, but to love, listen and to learn it. I grew up in a family of jazz musicians, my parents were amateur musicians and my four year older brother Ingmar is a fantastic bass player, he’s been the bass player in the NDR Big Band in Hamburg since 2009. We grew up in a house with more than 4000 LPs and later almost the same amount of CDs joined the collection. Everything from Louis Armstrong to Kenny Wheeler and Lester Young to Mike Brecker. So, it’s totally normal for me to know the tradition, but at the same time being free with the many other influences.

AR: The album contains mostly original compositions alone with Monks “Ruby My Dear” and Johnny Griffen’s “You’ve Never Been There”. Can you tell us a little about the concept behind the album and the chosen repertoire.

PH: Actually I never have a real concept, sometimes I like writing all original tunes for an album, with Ack van Rooyen we always mix originals with standards. With Roman, it was clear for me to write a tune for him and besides that, I’ve always loved his composition “Love Someone You Like”. I’ve listend endlessly to this on his “Live In Vienna” album with Mel Lewis. The track also appears on one of my favorites: Wolfgang Haffner’s International Jazzquintet “Whatever It Is”.

On both records Thomas Stabenow is the bass player, by the way. The Griffin tune we always opened our concerts with so this was an obvious choice for us. A B-flat blues has to be on every straight ahead Two Tenor recording anyway. For that I put classic Blues Quotes together – from Sonny Stitt, Sonny Rollins, Miles, Horace Silver and Griffin, where we take turns on. You need a nice ballad on a jazz recording, so I thought it would be nice to ask Roman to play one of his all time favorite ballads paying tribute to our master.

AR: I believe you and Roman Schwaller go back a long way, yet, this is your first studio outing together in a small band setting. What led up to the making of this album?

PH: That’s the reason! We’ve knowen each other for a very long time, I’ve always been a big fan of his, even before we first met and it’s a dream come true to once and for all make a two tenor album together.

AR: You’ve produced a large body of work as a leader. One album that in my mind stands apart in the discography is the Trio album with Dutch players Ruud Ouwehand and John Engels. As a saxophone player do you feel this setting provides you with more harmonic freedom?

PH: I think as a straight ahead tenor player, you have to make at least one trio album in your life. We just talked about tradition – now, this is a very important tradition in the history of the tenor sax. Actually I never dared to making a trio album, but at a particular time I was in a naive enough mood and just didn’t think too much about the examples. Also playing in trio with the great John Engels on drums was also a longtime dream. He is jazz history and I was lucky to get to know him through my wife, jazz singer Fay Claassen. She did a a fantastic special project called „Two Portraits Of Chet Baker“, where she sings and improvises completely instrumentally the Baker- Mulligan repertoire and in the second part she sings the beautiful standards Chet is associated with. And for this project John Engels was of course her first choice.

AR: You’ve worked a great deal with Ack van Rooyen, in my opinion one of the best trumpet “Flugelhorn players in Europe. In an interview some time back he said and I’ll have to translate this into English, “I like to play standards. The beauty is the there is always a question and answer in the melody, it’s conversational. In a lot of new music this is what I miss, all you hear is the question.” What are your thoughts on this?

PH: Yes, Ack is definitely one of the greatest voices on the flugelhorn, not only in Europe. He is such a genius in sound, phrasing, timing and charisma. You can recognize him immediately from playing only one note. He is also a master in taking a composition – standard or original – and make it immediately his own. He has an impeccable intuition to always choose just the right song and that’s exactly what he is always looking for in a composition – question and answer.

AR: You are also a member of the WDR Big Band. Europe has a rich tradition with the Big Band Format and features many professional Big Band’s that have almost become institutionalized as part of the national “Rundfunk”. What are your thoughts on the Big Band as cultural institution and do you think in the current media landscape their role has changed?

PH: In Germany we are very lucky to have three world class big bands as part of the public broadcasting system. All of them are absolutely important institutions in the post war jazz history. The great strength of the bands is that they never stand still. We always aim for interesting new projects, as well as keeping the tradition alive and giving the young generations opportunities to work with us. I think for all of us, it is totally natural to always be on the move and never just stay in the comfort zone of the great things each band has already achieved.

AR: Your also the Musical Director of the “Next Level Jazz” series in the Stadgarten in Cologne, can you tell us about the concept behind this series.

PH: A good friend of mine, who I was playing together with in the youth Big Band of the state “North Rhine Westphalia” in the early 80s, asked me five years ago, after having his own software
business, if I would consider hosting a jazz series in Cologne. That was a longtime dream coming true.

His business, “Next Level Integration” sponsors this concert series, that’s why my series is called „Next Level Jazz“. He gave me total freedom how to realize that series, so I decided to always put musicians together that I’ve known very well and combine them to bands that only exist on this very concert night, with myself always as a band member. I’ve organized concerts with for instance, another Two-Tenor-Quintet with myself, Bill Evans and Michael Abene on piano, I played a quartet with Bireli Lagrene, put together the legendary tandem of Richie Beirach and Adam Nussbaum, a quintet with Franco Ambrosetti, two tenors again with the legendary Scott Hamilton and sometimes I’ve even put together a big band with Ack van Rooyen, Wolfgang Haffner and Michael Abene as featured guests. I’m a very lucky guy to have this opportunity playing with my friends and heroes.

PH: I love being a jazz musician in my time, there is everything around me – tradition, jazz from now, avantgarde, fusion and so on. What I don’t like is the world of promoters, producers and critics – with exceptions of course – who want to dictate a certain taste and want to decide who and what is hipp and who and what isn’t. But on the other hand, this has always been there – in every art form. The most important thing for me is to make music from our hearts for our audience.

AR: To finish up – What’s next for Paul Heller.

PH: I’m planning to make a new recording with Ack van Rooyen, I have two live recordings waiting to be released, one with Tony Lakatos, Simon Nabatov, my brother Ingmar and Adam Nussbaum and
another one in quartet with Billy Hart, Simon Nabatov and Martin Gjakonovski. I’m collecting ideas and material for a solo recording and another goal is to record my “Next Level Jazz All Star
Big Band”. Besides that I produced together with my wife her last CD “Luck Child” that just won two „Edison Awards“, this is the Dutch Grammy. There will more from the Heller/Claassen team.

AR: Thanks Paul for taking the time to speak with me and indeed congratulations on the Edison, it was well deserved.

Paul Heller’s latest CD “Paul Heller meets Roman Schwaller” is available on Mons Records and can be found in all the usual stores.