The Zurich Jazz Orchestra, An interview with Steffen Schorn

Formed in 1995 the Zurich Jazz Orchestra has rightly earned it’s place among Europe’s top professional Big Bands. From it’s humble beginnings as a rehearsal band and forum for local composers and arrangers the band has constantly evolved over it’s 23 year history.

After seven years as a musical director, Rainer Tempel left the ZJO in April 2013 giving way for the current artistic director Steffen Schorn to take the reigns. Steffen’s first concerts as conductor took place in September 2014 at the Zurich Film Festival and the festival Jazznojazz with drummer Jojo Mayer. Since this time Steffen has led the band at countless concerts both in their home base of Zurich (Switzerland) and internationally.

In 2017 the band entered the studio to record their forth album and the first under direction Steffen Schorn titled “Three Pictures” (Mons Records). The album was released in April of this year. With this in Mind, we thought it about time to take a closer look at the Zurich Jazz Orchestra and have a chat with artistic director Steffen Schorn.

Steffen is no stranger to the European Big Band scene having played with almost all of the northern European professional ensembles. He grew up playing with symphonic wind orchestras in Germany as well as cutting his teeth with the Federal Youth Symphony Orchestra of Germany. Steffen recounts his love of jazz and in particular Big Band music came from his father. He recalls his introduction to Duke Ellington came via a cassette tape his father made of a radio broadcast of the Duke Ellington Orchestra live in Zurich. “This cassette tape with “Sophisticated Lady”, “El Gato”, “The Mooche” etc, stayed with me during my childhood until it was completely destroyed…” said Steffen.

Steffen’s family came from the former East German DDR. He told me that he regularly visited his aunt and grandparents in the east and at that time it was compulsory to exchange 25 Deutsche Marks into East German currency each day as a condition of entry. The interesting thing was that in the DDR there was almost nothing to spend it on except for LP’s. “I bought a lot of records with Big Band music, Glenn Miller, Duke Ellington, but also symphonic music with eastern European composers as Glinka, Borodin, Tchaikovsky, Stravinsky and Bartók.” he went on to say. These wide ranging influences from his youth are still today to be heard in his compositions and arrangements.

Speaking of influences, I pointed out that this year marks sixty years since the seminal recording of Miles Davis with the Gil Evans orchestra’s take on Gershwin’s “Porgy & Bess”. I asked Steffen what impact Gil Evans orchestrations had on his development as a composer and arranger. He said “Of course those legendary recordings make a lot of impact on me! Gil´s writing is so spiritual, colourful, structured and yet unpredictable and always directly from the heart.” He went on to recall an interesting anecdote from his student days:

“I clearly remember the moment as a student when I was experimenting with some self-constructed exotic scales and see what sounds I can get out of them. One example was a scale where I had an E, F, and F#, so I constructed an orchestral spread voicing that I thought could sound hip. At that time I had no possibility to try it out, and of course this “cluster” was kind of “forbidden” according to traditional arranging rules. In the same period I transcribed “The Duke” from the LP “Miles Ahead” and found out, that Gil Evans had used the same “forbidden” voicing already 50 years ago! – That really gave me a huge kick to move on.”

We went on to discuss the new album “Three Pictures”. During his first three seasons as musical director, Schorn delivered over 70 different arrangements. Each concert had a complete new programme and Steffen admits that this had been extremely demanding, adventurous and at times left the band a little under-rehearsed. He went on to say that the positive side of this was it added to the “alertness of the moment..” With the new album, the first under Schorn’s leadership, he said “I wanted to present the orchestra with a program that highlighted all the stylistic variety, the ensemble sound and the great soloistic interactions we’ve developed over the years. From my side as composer/arranger I wanted to present different approaches to composing for large jazz orchestra however at the same time try to create an “own” sound that is consistent throughout the recording.” Having heard the album I can say the band have certainly achieved this.

Steffen went on speaking in great detail about the music on the album and what become clear is that this album has been thought about in great detail. While definitely not a “program” or “concept” album it does have a thematic red line throughout. For more on this album you can read our review here.

We then moved on to discuss a subject that I’ve touched on in many of my recent interviews and that is the current state of jazz. With the art-form in a state of perpetual evolution I’m interested to hear my interviewee’s thoughts are on the subject. Steffen said’

“Of course its hard to predict where music and society will go. Jazz has always been a melting pot, merging influences of different cultures. Some people say there´s nothing more to explore in Jazz, everything has already been said in the past. I don´t think that way. I think there´s still a lot to explore, on all levels. Jazz has reflected different sides of society throughout its existence: dance music, fight for freedom and liberation, opposition and the list goes on. The Internet has given us a huge opportunity to become more globally connected, the challenge for the art form is how we can honour the heritage of different cultures and combine these into a new entity, a greater one without loosing the cultural treasures of the different traditions?”

We ended out discussion there leaving me with the firm opinion that the Zurich Jazz Orchestra is not only in good hands and it truly deserving of it’s reputation as one of Europe’s top jazz ensembles.

More information on the Zurich Jazz Orchestra can be found on their website.

The latest album “Three Pictures” is out now on Mons Records and available here.

This interview is an abridged version of an interview that appears in the Summer 2018 edition of the Jazz In Europe Magazine. Available here. 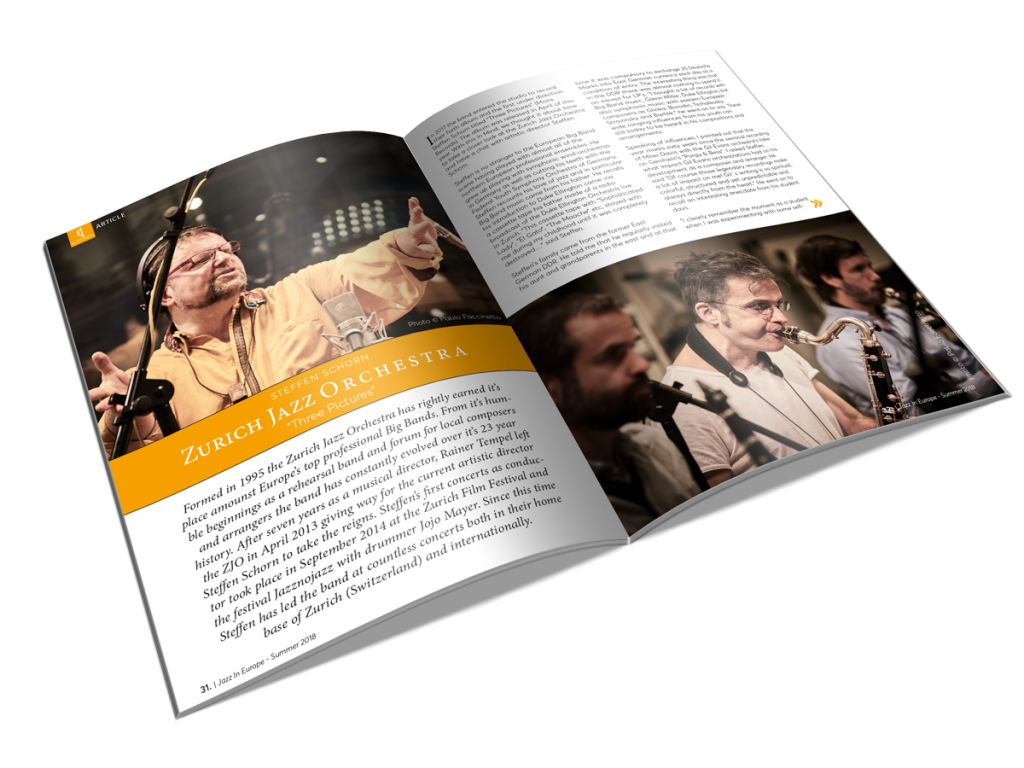