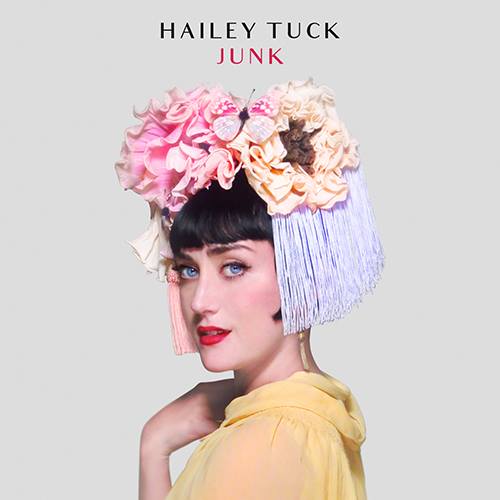 American singer Hailey Tucks story sounds like something that has come out of a F. Scott Fitzgerald book tinged with a little Christopher Isherwood. Born in Texas, she moved to France, drawn to the romanticism of the Paris life and secured an Italian countess as a benefactor after singing to her on a table. She has just released her debut album ‘Junk’ with a press release that states it ‘rips up the rulebook and turns Jazz on its head’. I caught up with Hailey recently in London, prior to her debut performance on the Jools Holland Show.

FR: Your press release for your new album ‘Junk’ say it ‘rips up the rulebook and turns Jazz on its head’. Can you talk us through this?

HT: Well, ha, I’m flattered that is in the PR release, but I don’t know if I’m really ripping up the rulebook, necessarily. I think that Jazz has gone a bit too far down the rabbit hole. You know like in classical music, you have an unfinished cadence – but you don’t really need to know what that really means to understand how that feels. And now I think Jazz has gone too far down as far as needing like a big paragraph explanation. It’s come more tribal and more exclusive than inclusive, so I don’t think I have turned anything on its head. I’m hoping I’ve just kind of gone a lot more by feeling rather than by cold choices.

FR: So, do you get frustrated by this need to categorise and tick certain ‘Jazz boxes’?

HT: Yes, I was really surprised as I had someone tell me the other day that I wasn’t really jazz and I was like, what are these rules that makes something jazz or not? It’s a Jazz producer, a Jazz singer making music – what excludes it from being Jazz? But I also think that Jazz fans tend to be a lot more purist than a lot of other types of music, which, of course, is frustrating.

FR: Ok, so what is it the makes you feel that you ‘fit’ in the Jazz genre?

HT: Well, I think I have a jazzy voice and I’m a Jazz fan. I’m trying to harken back – I mean there’s Jazz songs on the album. I want to honour the Jazz musicians that have come before me but also using music that is contemporary to me now. It’s about the intention, right?

FR: Yes! You have a really interesting choice of cover songs on the new album. Paul McCartney, Pulp, Joni Mitchell – do you think this is part of the ripping up the rulebook statement? They are not your average Jazz standards. What informed your song choice?

HT: One of my favourtie albums is Oscar Petersons ‘We Get Requests’ and on it he takes songs that they were sick of getting requests for. What I take from this is that is with a great arrangement and a new feeling, you can take the pop hits of right now and breathe new life into them – being original but also honouring what came before you. It was a back and forth collaboration between Larry and I. I wanted to pitch him 30 songs in 15 minutes – and I don’t think we ended up with any of those songs, nor do I think his first email songs were included. I mean these are all songs I listen to and some were important to Larry as a kid, some were important to me and it starts getting hard when you have the whole world at your fingertips. It’s like complicated karaoke or something. One thing Larry told me, which I thought was a great lesson, is to not do a song just for the sake of it – something you might regret doing in five years or something. Like Pulp, I love Pulp, I mean I think Jarvis Cocker must be a Jazz fan. And Larry remember that the Paul McCartney song Junk was the first son he learnt on guitar – it was just like a million emails back and forth to find songs that were relevant to both of us but would also follow us in the direction the album was going.

FR: What was it like working with Larry Klein?

HT: Larry is amazing. I call him like an Italian mamma mia and I was way more nervous than I thought I would be – like nervous breakdown nervous. We did a lot of vocal takes and he would get me to get excited about the next one by saying like ‘that was just so great, I really enjoyed that, but I think can we try it one more time?’ He’s so supportive. He someone makes you feel you are great.

FR: You have moved back to Paris recently – what is the Jazz scene like in Paris?

HT: I don’t know, I think the best Jazz scene at the moment, currently in the world is London. Paris, I have found recently is having an issue with venues – Jazz clubs are closing. Any time when there is extreme change in a city – but then rebirth will happen, so there’s a lot of great musicians there that I really like. But I like London is my favourite Jazz scene currently.

FR: So initially you were from Texas, moved to Paris then found an Italian Countess benefactor – can you talk us through this?

HT: I worked in a rare book store and I graduated high school early – I was a little bit lost as I didn’t know what to do. I knew I wanted to be a Jazz singer, but it was so confusing as there is no direct route to get there. So, I was a bit lost when I first move to Paris. I met a girl on a bus and we kind of hit it off – I was, at the time, living in a squat – she said I could come and stay on this velvet coach at this house. There was a party and I met the Countess, not knowing who she was and realized it was her house. I explained to her I was 18 and just moved to Paris and wanted to be a Jazz singer. She was like, ok, if you get on the table right now and sing for us, if you are good, you can sleep here for the night. If you’re not, you can go – I think she was kind of teasing me, but, ha, I wasn’t entirely sure. So, I got up on the table and sang ‘I’ll Be Seeing You’ and she said, ok, you can stay here. She really inspired me. She started booking me into events and art events that she held – she was a painter – and I guess her confidence in me, granted me the confidence in myself to actually figure it out.  Europe is much more supportive than America – you can’t really tour in America with a Jazz band.

FR: Finally, your album has just been released – what are your plans for gigs and where can we see you play?

HT: Yes, after the album launch in Paris I’m playing at the Love Supreme festival and also in Munich. And hopefully after my Jools Holland appearance some exciting things will happen as that is such a game changer.

FR: Thank you so much for taking the time to talk to us.

Findout more about the artist: Hailey Tuck and her visit Hailey’s Music Store