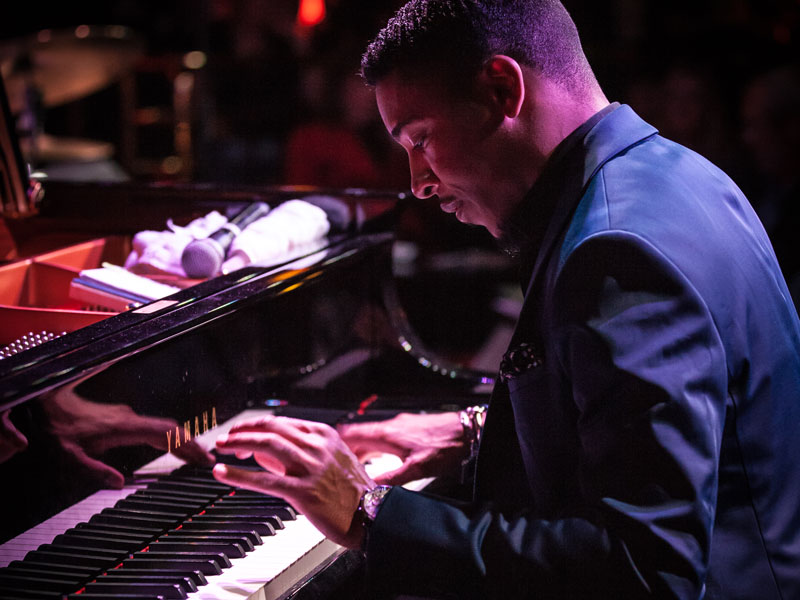 New York based pianist Christian Sands can be seen as one of the rising stars on today jazz scene. In April 2017 he released his 8th album and his first for Mack Avenue Records. In May this year he followed this up with a digital EP release. Titled “Reach Further” this EP acts as a precursor for his next full length album due for release on Mack Avenue later this year.

In March this year Christian performed at the Bluewhale in Los Angeles. This concert was recorded live and three of the recorded tracks were combined with two previously unreleased tracks from the Reach album to form the EP.

Reach Further serves as a natural platform to showcase his live performances, as well as a glimpse into what is to come. The live tracks feature material from the Reach Album however you can here the process of evolution within the material. Sands said “People react to different things musically in a live setting, and that influenced how we play these songs. But for us, mainly there are more chord changes now,” laughs Sands. “We’ve added different pulses and more grooves after playing in Europe and the United States.” For those that have not yet experienced Christian and his trio live, a series of videos from the Bluewhale recordings have recently been added to the Mack Avenue YouTube channel. See below.

In addition to maintaining a tight recording and touring schedule Christian has shown his hand as a producer with the Erroll Garner Jazz Project, producing the upcoming never-before-heard live album Erroll Garner titled “Nightconcert.” The album is a continuation of the work Sands has done with the late and deeply lamented Geri Allen, to ensure Garner’s legacy is never forgotten. “Geri was one of my teachers. I was studying with her during the same time I was studying with Dr. Billy Taylor. To watch her vision was incredible. When she introduced me to the Erroll Garner Jazz Project, I discovered the deeper idea of Erroll: his time, his phrases,” recalls Sands. “Being the Creative Ambassador to the Erroll Garner Jazz Project is a true honor and to be able to produce this record is something extremely heavy, yet humbling.”

We’re proud to have Christian as our cover story in the Summer 2018 edition of the Jazz In Europe Magazine and for those interested you can read the article online at issuu.com or order your copy here.

Christian continues to maintain a heavy touring schedule and later this month he will return to Europe with is trio to perform a series of club dates and festival appearances at the Santa Cruz de Tenerife Festival in Spain and the Jazz a Vienne Festival in France. Full Tour Dates are listed below.

More information on Christian’s recordings can be found on the Mack Avenue website.