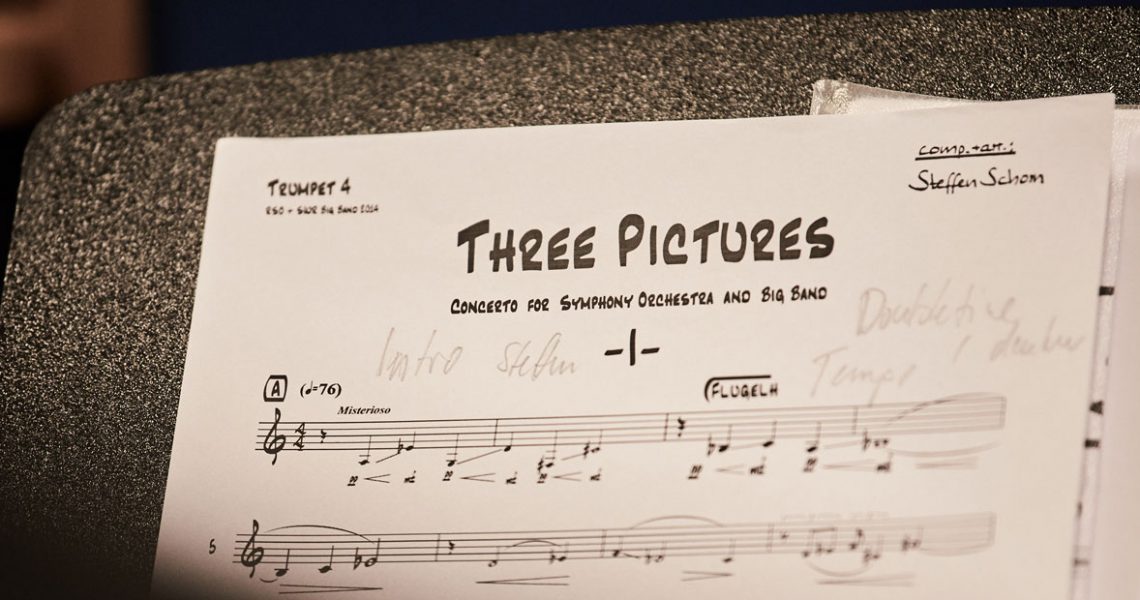 For lovers of big band music Europe is a great place to be. The continent is rich in tradition and sports many top class professional ensembles. The Zurich Jazz Orchestra can rightly claim it’s membership in this category. First established some 23 years ago as a workshop band the Zurich Jazz Orchestra has undergone a number of phases during it’s rich history. In 2014 the band appointed Steffen Schorn as artistic director and after a somewhat protracted gestation period the band has given birth to their latest CD and debut under the direction of Steffen Schorn titled “Three Pictures” (Mons Records 2018).

Since taking the artistic directors chair Schorn has presented the band with over 70 arrangements, and in his first three seasons presided over an extensive performance schedule. In a recent interview published in the Jazz In Europe Summer 2018 magazine Schorn said;

“I wanted to present the orchestra with a program that highlighted all the stylistic variety, the ensemble sound and the great soloistic interactions we’ve developed over the years. From my side as composer/arranger I wanted to present different approaches to composing for large jazz orchestra however at the same time try to create an “own” sound that is consistent throughout the recording.”

After multiple listening’s I can say with all honesty “Three Pictures” has succeeded in creating its “own” sound, this album has a uniqueness that defies comparison.

Three Pictures comprises 7 compositions all composed and arranged by Steffen Schorn who can also be heard  soloing on C-Melody Saxophone and Bb Tubax (more commonly know as subcontrabass saxophone). The album features two longer pieces in suite form, the “Africa suite” (Tracks 2,3 & 4) and the title suite “Three Pictures” (Tracks 6, 7 & 8). In addition there are three individual compositions and the interlude piece “Der Wildbotz 1 & 2” rounding out the set.

The Album starts with “Eye of the Wind”, a free flowing piece featuring solo’s from tenor saxophonist Thomas Luthi, trombonist, -Rene Mosele and pianist Gregor Muller. This track has an interesting back story best explained in Steffen’s own words.

“Eye of the Wind is a piece dedicated to and written on one of the most beautiful sailing ships on the planet, the tall ship “Eye of the Wind”. One week before I started to work with the ZJO on a regular basis, I took a trip on the Atlantic with my saxophone friend Roger Hanschel. The feeling was just overwhelming and cannot be described by words… I wrote the piece in the jib net with 30 m of square rigged sails above me and half a kilometer of oceanic live beneath me.”

This track is a strong opener and the extended harmonic and melodic phrases along with the shifting harmonic rhythm add to the feeling described by Schorn.

The first of the two extended pieces is the “Africa Suite”. This suite is in three movements, all based around a common rhythmic figure in 11/16 that functions as a “mantra” under the collective improvisation. The energy builds through the entire opening movement culminating in power chords toward the end. The second movement is a shorter piece that conjours up visions of the cacophony of the African market place while part three closes off the suite by uniting the rhythmic urgency constant through the entire piece with a homophonic melody that builds until the end.

The second of the extended pieces is the title suite “Three Pictures”. This suite is 180 degrees juxtaposed from the Africa Suite presenting a rather impressionistic soundscape. This track reminded me to some degree of the Gil Evans Orchestra’s classic Impulse releases, ‘Out of the Cool” and “Into The Hot”. Schorn said the composition is entirely written in one 9-tone-mode that he has called “F-Monster” due largely to the “monstrous harmolodic” possibilities it provides.

Contrasting to the extended pieces are two versions of a short piece titled “Der Wildbotz”. This track is an arrangement of a piece that Schorn recorded with Lars Andreas Haug in 2014 and once again based on an odd meter riff played by two contrabass clarinets. Version one is a short piece presenting the tracks main motif and functions as a segue between the two extended pieces while the second version is somewhat extended a features short and frantic solo’s by the trombone section and the two contrabass clarinets.

The Album closes with two tracks, “Keep Your Tongue” and “Ballade. These two tracks are perhaps the most conventional track’s on the album and provide the listener with some closure for the wild ride they experienced throughout the rest of this recording.

Three Pictures takes the listener on a rollercoaster ride through many varied soundscapes and emotions ranging from the impressionism of a Monet to the anguish of Edvard Munch’s “Scream” and all points in between . The Zurich Jazz Orchestra performs flawlessly throughout,  there is never a dull moment. The solo passages are strong and the superb musicianship of the players is ever present. This album is not your standard Big Band album and in no way can be described as “easy listening”. For those, looking for an adventure in sound this album fit’s the bill perfectly.

I enjoyed this album from start to finish. With each listening I’d peal off another layer only to discover a new level of depth in these wonderful performances. Three Pictures is a great document of a large jazz ensemble at the top of their game. Highly Recommended.

The Album is available for purchase and streaming here.

More Information on the Zurich Jazz Orchestra can be found on their Website.

Editors Note: An extensive interview with the artistic director of the Zurich Jazz Orchestra can be found in the Jazz In Europe Summer 2018