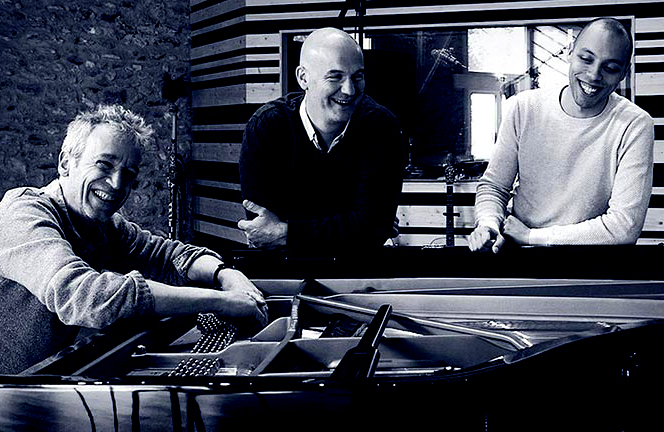 On the 5th of June French pianist Laurent De Wilde and his Trio will play at the iconic Zurich venue Moods. Laurent will be performing music from his latest award winning album “The New Monk Trio” and will be joined by his regular trio featuring Jérôme Regard bass and Donald Kontoumanou on drums.

Not only is Laurent an award winning jazz pianist, he is also a highly respected composer and an author of a number of book’s including his biography of Thelonious Monk titled simply “Monk” (Da Capo Press). In 2017 Thelonious Monk would have turned 100 years old and it was this milestone that inspired Laurent to embark on his current project “The New Monk Trio”. An extra reason for the project is the fact that 2017 is not only the centenary year of the birth of Monk but it’s also the 20th anniversary of the release of the first edition of his biography.

The album was released in France in 2017 and was awarded Best Album Of the Year (2017) by the French L’académie de jazz. February this year saw the worldwide release of the album.

The concert on the June 5th can not only be enjoyed by those in Zurich but in fact world wide as the concert will be streamed live via the Moods Digital platform. Since its beginning 25 year ago, Moods has developed into one of Zurich’s largest and most important cultural venues. At the same time, the venue has become one of Europe’s prominent Jazz clubs and enjoys a well-deserved global reputation amongst musicians and critics alike.

During summer 2016, Moods was renovated and equipped to be the first club in the world able to broadcast and stream the concerts in high definition with its own subscription video live-and-on-demand web platform. The facility features 10 full HD mobile cameras plus state-of-the-art broadcast studio.

Those that wish to enjoy the streamed concert can purchase a digital ticket via the Moods Digital website for 6.90 CHF (approx. 6.- EUR or 6.90 USD). This ticket gives you 7 day access and allow you to view the extensive archive of concerts stored on the platform. All content can be viewed in FullHD and with perfect mastered sound.

Read our Interview with Laurent here. Also you can read Jan Veldman’s review of his latest Album ” The New Monk Trio” here.