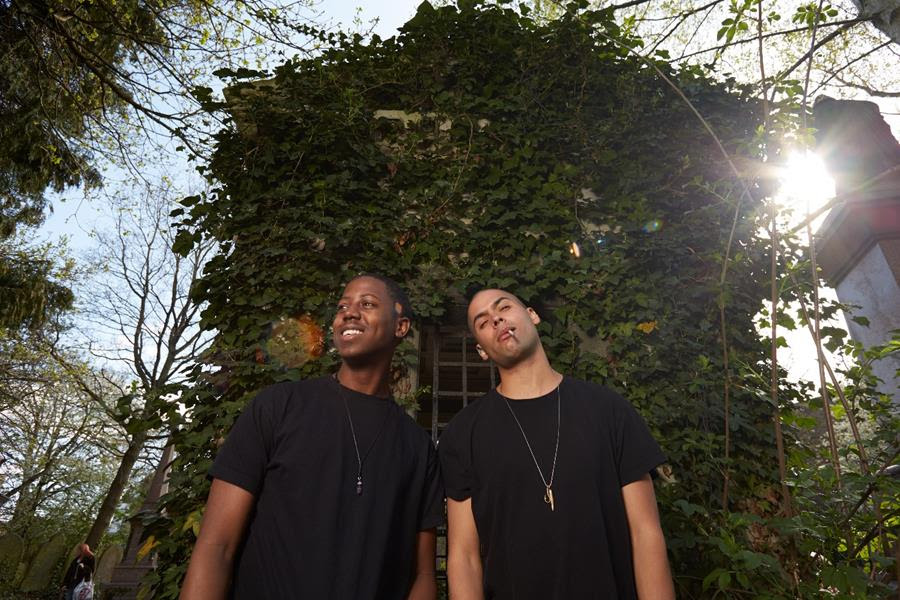 Following the release of ‘Journey To The Mountain Of Forever’, semi-free jazz trailblazers Binker and Moses return with their new album ‘Alive In The East?’. The Album will be released on Gearbox Records on June 29th. The album will be a limited edition, Individually numbered release available on clear vinyl via the Gearbox store and Bandcamp pages.

Following the release of ‘Journey To The Mountain Of Forever’, semi-free jazz trailblazers Binker and Moses return with their new album ‘Alive In The East?’. The Album will be released on Gearbox Records on June 29th. The album will be a limited edition, Individually numbered release available on clear vinyl via the Gearbox store and Bandcamp pages.

Recorded at Stoke Newington’s Total Refreshment Centre, which has been, and continues to be, a prominent platform for promoting, recording and releasing some of the best new talent from the British underground. ‘Alive In The East?’ serves as a companion piece to ‘Journey’ but with a different energy – as North London is to South London, as West is to East. It features a number of the UKs most prominent musicians both old and new including guest appearances from Evan Parker, Byron Wallen, Tori Handsley and Yussef Dayes – one of only two recordings that this particular line-up has played on.

Speaking about the album Moses Boyd says, “To be able to get all these musicians in a room at that the same time is almost impossible, ‘Alive In The East?’ is a rare moment that captured how fun and special it is when were able to get together and play on home turf.”

‘Alive In The East?’ perfectly encapsulates the fervent energy and future-facing magnetism of the current scene in London. Full of vehement improvisation, shamanic spiritual free jazz trances and invigorating raw power, the albums two-drum, two-saxophone, trumpet and harp combination is all at once hypnotic and mercurial. Whilst it’s important to note the estimable series of musicians on the record, and their technical prowess, the real attraction here is in the groups inimitable passion for exploration, development and thirst to push the boundaries of jazz both musically and conceptually.

Binker and Moses are among the frontrunners of London-based jazz musicians that are influenced by the music that surrounds them including grime, hip-hop, electronic and blog culture as well as, of course, jazz. Like their current counterparts, they’re connecting with a new, younger audience. These young musicians have been trying to turn the expectations of the genre on its head – appearing everywhere from national televised performances such as the esteemed Later… With Jools Holland, whilst conversely performing in intimate spaces at the likes of Dalston and Deptford’s Job Centre as well in bookshops, cafes and record stores.

Born either side of the Thames – Binker north in Edmonton, Moses south in Catford – the pair met eight years ago and toured extensively as members of Zara McFarlane’s band, recording three albums for Giles Peterson’s Brownswood Recordings. It was during the onstage sound checks with McFarlane that Binker and Moses started developing their duo improvisations, eventually bringing the idea of recording them to the attention of Gearbox Records, the vinyl-led record label and vinyl mastering studio.

At 31 years of age Binker Golding has already been playing saxophone for 23 years. He studied jazz at Middlesex University and the Guildhall School of Music and Drama, where he completed his master’s Degree. He has learned from and played alongside many great saxophonists including Steve Williamson, Jason Yarde, Denis Baptiste and Gilad Atzmon. Binker is the Musical Director of the TW Youth Orchestra and has composed concert repertoire and conducted the Nu Civilisation Orchestra. Binker also plays in Moses’ band Exodus and performed with Kano at last year’s Mercury Prize.

26-year-old Moses Boyd only started playing music in his teens, but within a few short years was performing in Denys Baptiste’s quartet at the Royal Festival Hall. Moses was the 2014 Worshipful Company of Music’s Young Jazz Musician of the Year and won the John Peel ‘Play More Jazz’ Award at the 2016 Gilles Peterson Worldwide Awards. He has worked and collaborated with artists including Lonnie Liston Smith, Ed Motta, Little Simz, Four Tet, Floating Points, Sampha, Gilles Peterson. He leads his own outfits The Exodus and Solo Exodus which infuse jazz, grime and electronica influences. Moses also produces and releases music on his own Exodus Records label. During this incredibly busy period Moses still found the time to graduate from Trinity Laban with a BMus (Hons) Jazz Drums in 2016.

More Infor mation on the new album can be found at the Gearbox Records website.

Binker and Moses are doing a small tour of Europe to celebrate their newest album, ‘Alive in the East?’. They’re playing at a series of festivals across UK and Europe. Concert dates listed below.