After having had the honour and pleasure of interviewing the mighty Steve Gadd, I was invited to attend one of his shows at Ronnie Scotts. This is not a review. I am in no position to review Steve Gadd, I am, however, more than happy to tell you about my experience.

Standing in the queue, waiting for the doors to open, I was highly entertained by the conversations people were having and the buzz that was around me. There was a mother who knew nothing about Steve Gadd, but had treated her son to a ticket. He was clearly incredibly excited, but also slightly annoyed that his mum couldn’t understand the magnitude of the night. In fact, Steve Gadd popped his head around the door to speak to the doorman (I heard gasps and an ‘Oh My God, its him!’), and the silence that fell was incredible. He went back in, and the mother looked at her son and asked who it was. The look on her son’s face, was a picture. How could anyone possibly not know that was Steve Gadd? Brilliant. Also in the queue were the drummers – a wide range of ages and I’m guessing experience.

I lost count of the number of times I heard Buddy Rich being mentioned, but it was agreed, that Buddy Rich and Steve Gadd were the best drummers ever, on the planet. Silence fell again in the queue as Steve Gadd came out and walked off, with a group of people, down the street. The doorman, quickly told us all not to worry as he was coming back. Then the banter began in the queue, wondering where Steve had gone, fascinating.

I spent the evening, at the bar, next to two Ronnie’s regulars. Two wonderful gentleman who told me all about the gigs they have attended – good and bad – and that they always sit on the same bar stools every time they attend. You got the sense they were almost part of the furniture. They had seen Steve Gadd play several times and assured me I would enjoy my evening and that he was ‘really good’. They also explained that the bar was ‘the place to be’.

Steve came onto the stage. To be honest, it was the loudest clapping and cheering I think I have ever heard at Ronnie’s. People standing and cheering, I think I even saw someone bow. Steve acknowledged the audience with a smile and wave and quickly sat behind the kit and started playing with his band. A simple, funky, laid back groove. The band were incredible. An overwhelming sense of them all doing exactly what they wanted to do and enjoying every minute of it. After the first track, Steve told us about his new album and that this was the first time they have played any of it live and asked us to bear with him. He talked about how scary it was to play the material live for the first time and that they were all being quite courageous. He was almost apologising in case something didn’t go as planned. Incredible. I can’t imagine a moment when he would need to apologise for anything he played.

The music was just wonderful. I couldn’t keep still for many of the tracks as the groove was just too much. The musicians all fed off each other and were as one throughout, not just musically but in every way. You could clearly sense the love and respect they had for each other and how much they were truly loving what they were doing. One of the most impressive things, for me, were the drum solos. There were two, both of which were quite short. Understated, versatile, stunning dynamics, technically supreme of course, and most importantly from the heart. There was no need to show off or impress. He just played. And he was amazing.

The most significant thing for me, during this evening, was being able to take my drummer Marley Drummond with me. How could I go to see Steve Gadd without a drummer?! Marley is a young drummer, early in his career and a truly wonderful human being – and Steve Gadd, of course, is an inspiration to him and he had never seen him play. I watched his face quite closely throughout the night. I think his eyes were literally on fire. The joy, the awe, the inspiration was all clear, with no need for words. At one point, we looked at each other and he said, ‘he just does it……….so naturally’. And this is one of the most incredible things to see when watching Steve Gadd play. It is like the kit is an extension of himself, of his very being.

After the show, we spoke to Steve and I had the great honour, to be able to introduce Steve Gadd to Marley. It was an incredible moment. As soon as I told Steve that Marley was a drummer, it was like this sublime moment, of ‘oh, you’re like me, one of us’. Not that Steve was not at ease – quite the opposite – but there was a moment of a kind of community spirit, drummers united or something. They chatted for a bit and to be honest, I felt a little emotional seeing it. Steve Gadd is truly a God to many drummers. A true role model and inspiration but what adds to this, is that he is the nicest guy. So gentle, warm, so, so humble and caring – it’s quite overwhelming when you are with him. I spoke to Steve and of course told him how wonderful he was and I had my own ‘moment’ with him too. I told him that the most significant and joyous thing for me, watching his performance, was that I got the feeling that he was truly at home behind his kit, that it was just part of his very being. He looked at me, with a sparkle in his eye, nodded and just took my hand.

It was an amazing evening. 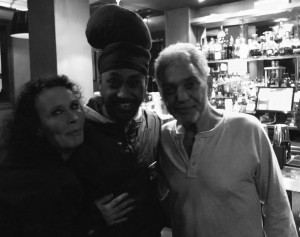