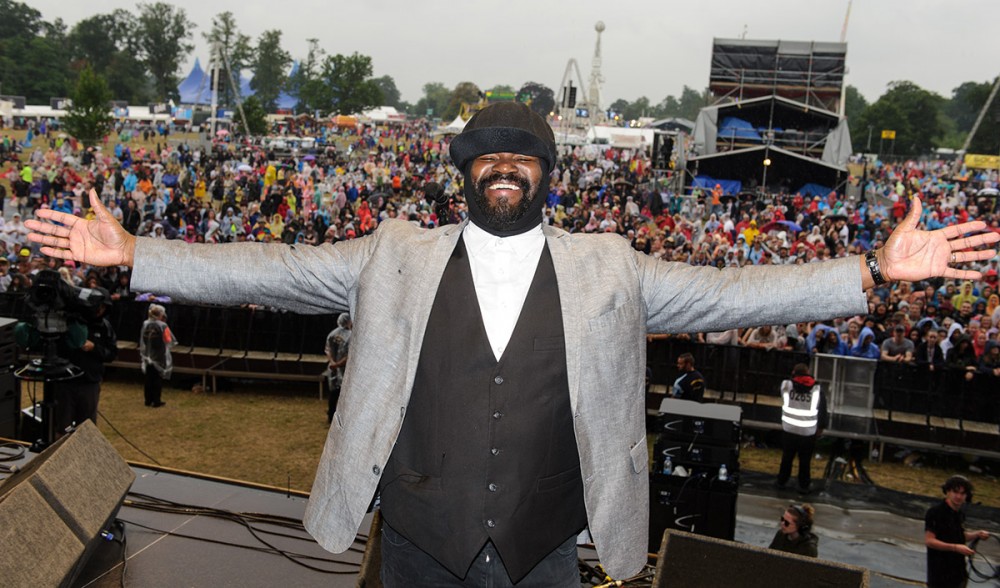 Jazz vocalist Gregory Porter is touring his newest album “Nat King Cole & Me” (Blue Note 2017) with songs recorded or inspired by one of his earliest and strongest influences, Nat King Cole.

Well-known to European audiences, the jazz-pop vocalist and pianist Nat King Cole (1919-1965) had a string of hits in the 1940s and 1950s singing and playing a wholesome music devoid of the most innovative currents in jazz of the era, namely bebop and its many successors. His success in the era of racial segregation in the United States is noteworthy, though, as he was the first black-American jazz-pop entertainer to host an American radio program “King Cole Trio Time” in 1946, and he was one of the first black-Americans to host an American television program, “The Nat King Cole Show” in 1957.

Porter’s previous release “Take Me to the Alley” (Blue Note 2016) won the Grammy Award for Best Jazz Vocal Album in 2017. This one like his previous albums better reflects his other influences from gospel, soul, jazz and the blues as the strongest currents in Porter’s songs of love lost and gained within fragile family love and hardships. His earliest recordings are still noteworthy even prescient for invoking social themes similarly to jazz and soul artists in the civil rights era, singing protest and spirituality alongside ballads just as in the leading black male vocalists of the 60s and 70s, the most remarkable voices of the era like Donny Hathaway, Otis Redding, Marvin Gaye, or Gil Scott Heron.

Porter’s debut “Water” (2010 Motema Music) was nominated for a Grammy in the Best Jazz Vocal Album category, but the standout track on this one never got proper attention. “1960 What?” is a deep neo-soul gem recalling the sociopolitical lyrics of Scott-Heron or Marvin Gaye. A song like this, which is about the devastating race riots across cities in the United States through the 1960s mostly preceding the assassination of Martin Luther King in April 1968, still seems like a necessary cry for our times.

As Porter once explained to me in a previous phone interview, “I used Detroit, Chicago, Cleveland, and Los Angeles, so several domestic disturbances based on feelings of unjustness by segments of the community. That song is a statement or a documentary of mistreating people, and they are so upset about this, that they are burning their own neighborhoods.”

Porter’s second album “Be Good” (2012 Motema) is equally strong with standout tracks “On My Way to Harlem,” which is about the gentrification of Harlem, and “Be Good (Lion’s Song),” which is about the singer’s own broken heart. Overall, there is a gentle modesty and openness to all of his songs, and his music continues to find larger receptive audiences around the world, while the time seems ripe for it.

Porter lives in New York, but before moving to the Bedford-Stuyvesant neighborhood of Brooklyn, he also lived in Harlem, while he was born in Los Angeles, California (in 1971), and raised in Bakersfield, which is a farmer’s town far north of LA. Later he studied Urban Planning at San Diego State University on a football scholarship, but a shoulder injury caused him to end his football career.

His life as a reborn jazz singer in New York City only began after he joined a theater production in San Diego of “Ain’t Nothing But the Blues.” This production debuted in Denver but eventually reached New York, first for a run on Off-Broadway, then the big-time on Broadway.

Porter has been living in New York City for many years at this point, but he still carries a country-man’s aesthetic, possibly connected to his youth. He was raised by his mother who was a minister, in the agricultural country of the San Joaquin Valley, in central California, which may also explain why he always wears a hunter’s cap (with ear-flaps) in the style of the geeky Ignatious J. Reilly, the main character of John Kennedy Toole’s cult novel “A Confederacy of Dunces.”

This is Porter’s fashion touch, yet by always wearing his cap with ear-flaps down, whether in-doors or out, and with his thick moustache and a wrap-around beard, he appears down-to-earth, with a disarming, unpretentious demeanor or he can also come across as a country-blues yokel, out of place in the big city. He is a blues lover at heart, though and so possibly his music is even a new style of blues for our times.

“The Blues is the essence of the black American experience, that and gospel. It is the birth of jazz, rhythm and blues, and soul. It is the root music of black culture and the essence is the human condition in triumph and failure. When I am reflecting on something in my life, something that has gone wrong, I am in the blues. It is so cold-blooded, yet soulful. The blues wraps up the experience of being considered less than someone else, but you know you are not less, you’re even better than that other person,” says Porter.

While anaemic pop music falls short of this, many musical genres in the past especially jazz and pop of the ‘60s and ‘70s were not as meek. Gregory Porter’s songs at their best help to keep this flame burning.

Gregory Porter’s tour across Europe continues through the end of May 2018. Tour dates below:

Find out more about Gregory Porter’s European Tour and TIX to see him play LIVE!