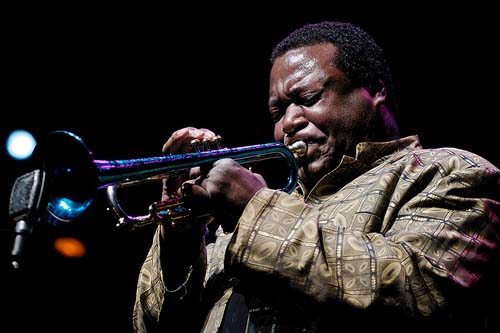 Trumpeter Wallace Roney returns to Europe later this month for a limited series of concerts. Starting on the 15th at Moods Jazz Club in Zurich, Roney and his quintet will also perform in Austria, Germany before finishing up with two dates at the Sunset-Sunside Jazz Club in Paris.

Wallace Roney has often been compared to Miles Davis and this is logical, Wallace was mentored by Miles Davis after Miles heard him in 1983 at his birthday gala performance in Carnegie Hall. Their association peaked when Miles chose Wallace to share the stage at his historic performance in Montreux in 1991.

After Davis died, Herbie Hancock, Ron Carter, Wayne Shorter, Tony Williams and Roney banded together and toured the world in tribute. In a recent review of Roney’s latest album “A Place In Time” it was stated that “…at this point, Davis’ impact on Roney can be considered mostly historic, with Roney’s playing larger in scope, firmer in tone and sharper in attack than Davis”.

Apart from his relationship with Miles Davis, it was in the bands of Tony Wiliams and Art Blakey that he came to the attention of the jazz scene at large becoming one of the most in demand players winning Down Beat Magazine’s Critic’s Poll for Best Trumpeter in 1989 & 1990. Wallace debuted as a leader in 1987 with “Verses”, on Muse Records and since the has been documented on more than 250 recordings. His latest album “A Place In Time” was release in November 2016 on HighNote Records.

More information on Wallace Roney can be found at his website.