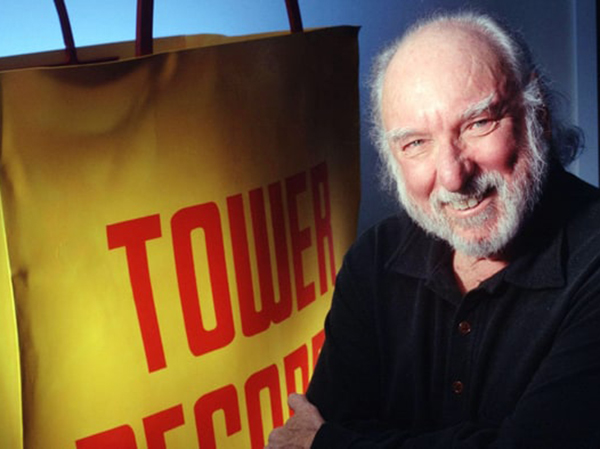 The Sacramento Bee reported that Russ Solomon, the guiding force behind Tower Records died Sunday night aged 92. Solomon founded Tower Records in 1960 opening his first store on Watt Avenue, in Sacramento, California. Over the years Tower Records grew to be a worldwide franchise with iconic stores in New York, Tokyo, London to name just a few.

Featured Image by Michael A. Jones

With the downturn in CD sales and pressure from online competitors Tower records filed for bankruptcy in 2004 and finally ceased trading in 2006.

As if to defy the digital forces that reshaped the music business, Solomon opened another music store just a few months later, on the very site of one of Tower’s flagship stores in Sacramento however the encore failed after three years of operation. Nonetheless, Solomon enjoyed a redemption of sorts as the star of “All Things Must Pass,” a poignant documentary on Tower’s history produced by actor and former Sacramentan Colin Hanks reported the Sacramento Bee.

Solomon was a visionary in the music industry. At age 16 he began selling jukebox records at his fathers drug store in the Tower Theater building at the corner of Broadway and Land Park Drive. He called the business Tower Record Mart. After his first business failure in 1960, he was able to borrow $5,000 and convince his creditors to supply him with new inventory. He quickly incorporated a new business under the name MTS Inc and Tower North on Watt Avenue, his first stand-alone store.

Dale Kasler and Bob Shallit wrote in their obituary, “What Tower achieved was a sensation. Until the 1960s, there weren’t many record stores outside of the Sam Goody chain in New York. Music was sold mostly in the remote corners of department stores. Inspired in part by dad’s drug store, which sold a wide variety of goods, Solomon offered music fans a veritable feast, with generous helpings of the offbeat and obscure. Word soon went out: Tower sold records you couldn’t find anywhere else.”

The Sacramento Bee Obituary opened with a statement that sums up Solomons legacy:

“Talk about the perfect coda: Tower Records founder Russ Solomon died with a drink in his hand and a smart-aleck remark on his lips.”

According to son and former chief executive of Tower, Solomon was watching the Academy Awards ceremony Sunday night at his home when he was stricken with a massive heart attack.

“Ironically, he was giving his opinion of what someone was wearing that he thought was ugly, then asked (his wife) Patti to refill his whiskey,” Solomon said. When she returned, he had died.