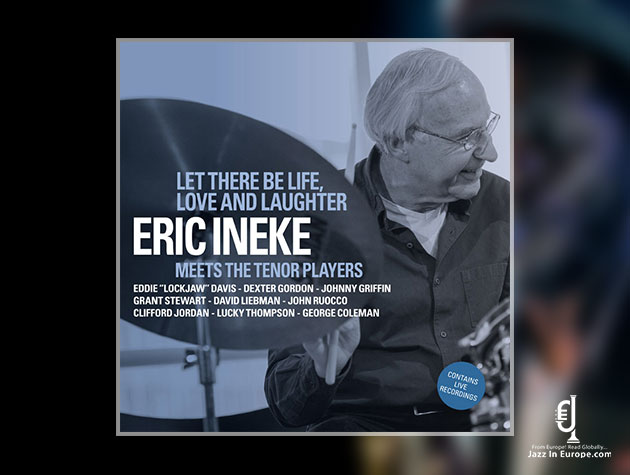 Last year was very special for drummer Eric Ineke, he turned 70. Eric celebrated this with a concert in one of the most famous jazz venues in the Netherlands, the Bimhuis in Amsterdam. He also was awarded Royal Honors for services to the art’s for his work as a jazz artist and a teacher. Finally, Eric Ineke produced a CD with nine famous tenor saxophonists with whom he played with during his long career.

The CD is titled ‘Let There Be life, Love and Laughter’ (subtitled: Eric Ineke meets the tenor players). The first recording dates from 1968 and the last one was made in 2014. The rhythm sections are Dutch (the pianists Rob Agerbeek, Rein de Graaff, Rob Madna and Rob Bavel and the bassists Henk Haver, Koos Serierse, Ruud Jacobs, Rob Lange Reis and Marius Beets). Eric Ineke plays a prominent role on the CD, but the main characters are the saxophonists from North America.

‘Body and Soul’ is the first song on the CD (recorded 1984) and features Eddie Lockjaw Davis on tenor saxophone. He plays a wonderful version of the standard, his approach to the tune is far more subtle than the muscular musical language he often spoke.

Dexter Gordon often played in the Netherlands and this was also the case in 1972. In this version of ‘Stablemates’ he explores all the angles of the melody, it’s a very intense rendition. Johnny Griffin (recorded 1990) interprets ‘Wee’ and performs his well-known rocket method: Let’s see who plays more notes in a minute on the tenor?

Canadian Grant Stewart visited the Netherlands in 2013. The accompanying band for Eric Ineke is called ‘Jazz Express’ with amongst others tenor saxophonist Sjoerd Dijkhuizen, who also has a role in ‘Bye, Bye Blackbird’.

Eric Ineke has been a friend of David Liebmann for years, in fact together they wrote the book: ‘The Ultimate sideman’ and of course, the American saxophonist can also be heard on the album. Liebman’s appearance on Kurt Weil’s ‘Let there be life, love and laughter’  is the most recent recording (2014) and the title track on the album. Tenor saxophonist John Ruocco can also be heard in this intriguing live performance without a piano. The lack of the piano leads to an intense collaboration between Eric Ineke and bassist Marius Beets while both saxophonists and drummer play inventive solos.

Clifford Jordan plays his own composition ‘Prayer to the People’ (1983). The recording quality is very good as the concert is recorded for broadcast in the studio. Lucky Thomson (1968) clearly shows in ‘Lady Bird’ that his technique equals that of Johnny Griffin. Benny Golson often said that Jordan’s way of making music had been an example to him.

George Coleman (‘You can’t play with me, if you can’t play Cherokee in any key.’) ends the CD with an impressive rendition of ‘Walkin’ (1974). Coleman plays as we are accustomed – mixing robust and sometimes subtle styles.

What makes this CD extra interesting is that it shows a piece of history of the tenor saxophone in jazz. In this case, an important aspect of jazz is clearly emerging. Big soloists have their own sound and put their unique signature in each piece of music. It is one of the characteristics of the art form that is called jazz.