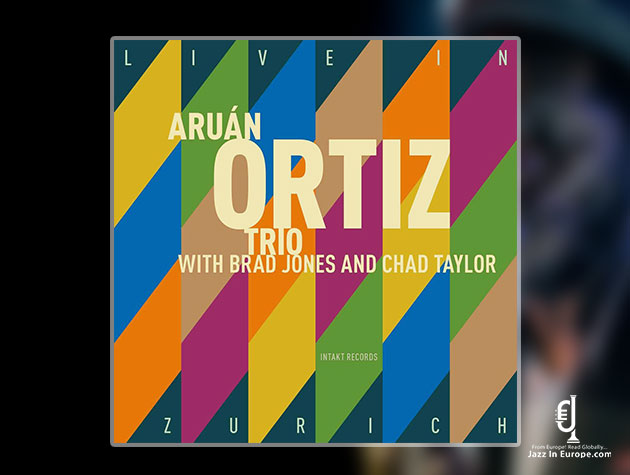 My first taste of Aruán Ortiz was his Hidden Voices CD, to which I gave a rave review when it appeared in late 2016. Here, it seems, he took his trio and three of the major pieces in the set (his two originals and Ornette Coleman’s Open or Close/The Sphinx) to Zurich a couple of months later. This live CD is the result of one of those concerts.

Ortiz’ approach to the music here differs from the studio album. In Analytical Symmetry, for instance, he opens with an out-of-tempo introduction before moving into the percussive effects of his right hand playing a steady sort of beat against the percussion (Mbira) played by Chad Taylor. This interplay goes on for quite some time, with the Mbira shifting its accents and bassist Brad Jones making some commentary here and there.

The performance here is considerably more abstract than the recording, with Jones playing high figures on bowed bass and Ortiz also more abstract in his piano commentary. One could almost call it an ambient jazz performance except that the music has much more substance. It develops more slowly, too, but develop it does, eventually moving into a steady beat with the pianist throwing in some Monkish figures over a bitonal foundation. The rhythm is also more Latin-sounding here than on the record, although in places the beat dissipates and the performance takes on the feel of an Art Ensemble of Chicago performance. (Reading the liner notes, I discovered that I was not far off the mark.

One of Ortiz’ strongest musical influences was Muhal Richard Abrams, a former member of the AEC who died last October 29. Abrams took Ortiz to museums and had long discussions with him about Chicago’s progressive African-American music and Scriabin.) In short, it’s completely hypnotic, drawing the listener deep into the workings of the trio’s musical mind. Ortiz also blends his Fractal Sketches into the music, thus giving us a 34-minute performance of modern jazz as high art.

Indeed, the abstract quality of the performance almost defies description. It’s almost like having an inner view of the workings of Ortiz’ mind as he plays with themes and variants, connecting and disconnecting musical ideas as they occur to him. You simply have to stay with him as he moves themes, motifs and improvisations around like a musical chess game in which there are no winners or losers, merely different moves. It’s free jazz, but it’s not, because whatever free (and, in this case, atonal) musical ideas are thrown out there, he is able to corral them and use them as a springboard for further invention.

The second set opens with an a capella bass improvisation by Jones as fascinating and inventive as Ortiz’ pianism. This eventually morphs, surprisingly, into a jazz reconstruction of Chopin’s Étude Op. 10 No. 6, unrecognizable to most Chopin-lovers except for portions of the top line of music. And Chopin somehow morphs into the Coleman pieces. As sometimes happens in Ortiz’ playing, there are hints here and there of Tristano, who I still feel is one of the most underrated influences on modern jazz in history. Ortiz plays a long series of single-note improvisations, eventually bringing in the left hand as counterbalance. Eventually he introduces some Cuban rhythms, but then deconstructs those as well, producing a sort of swirling, asymmetric vortex of sound on the keyboard. He wraps it up with a swinging, rhythmic riff.

The album ends with a surprise: Ortiz’ treatment of the old Arthur Schwartz tune Alone Together, or to be more accurate, a spacey rewriting of Alone Together. Ortiz is unusually subdued here but still inventive, reveling in the rich chord patterns of the tune until he eventually meanders off into playing figures higher and higher on the keyboard until the music simply disappears into the ether.