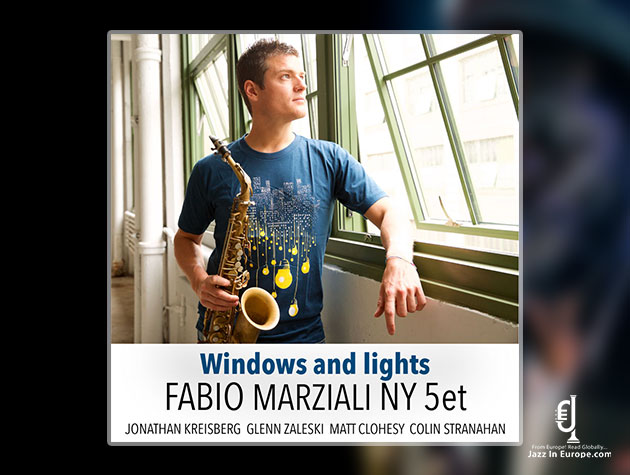 Fabio Marziali is an Italian Alto Sax player currently living in Amsterdam. Named one of the most promising Italian jazz musicians on the scene at the moment. His new release “Windows and Light” is his fifth album as a leader and presents nine original tracks composed by Marziali.

Windows and Light features a quintet with Jonathan Kreisberg on guitar and a rhythm section comprising of Glenn Zaleski – piano,  Matt Clohesy – double bass and Colin Stranahan on drums.

The first thing that comes to mind when you press play is the exceptional sound that Marziali has developed on the Alto,  sweet where need be and growling where appropriate.  Marziali provides the perfect counterbalance for Jonathan Kreisberg, who in my mind,  is equally the star of this show.

While there is no solo room to speak of provided to the rhythm section they are omnipresent and consistently tight throughout the album providing a solid basis for Marziali and Kreisberg. The third track on the album, “October”,  is a prime example of how this quintet functions as fully integrated whole.

This album is largely a high energy affair with the exception of tracks like “Ancient Ruins” and “A safe place” providing a quiet resting place. The albums opening track, “Underground Tale” sets the tone for the album with it’s unisono theme giving way to a superbly constructed solo by Kreisberg before passing the ball to Marziali. On this track and indeed the entire album,  Marziali shows his command of the instrument while exploring the full range that the Alto sax provides.

Closing out the album is “True friend”,  a slightly more pop oriented track featuring an interesting rhythm track with piano and acoustic guitar fitting seamlessly together. On top of this we have once again the melody played in unison giving way to solo’s by guest guitarist Marcel Liu and Marziali.

Personal highlights of this album include Kreisberg’s solo on ‘October’ and Marziali’s solo on the lilting ballad “Ancient Ruins’. The arrangements are strong ensuring a great balance between the arranged and improvised sections.

This album is not produced to be put on as background music, it commands your attention from start to finish. The performances are exceptional as is the quality of the recording. This album is highly recommended.

The album is available at iTunes | Amazon