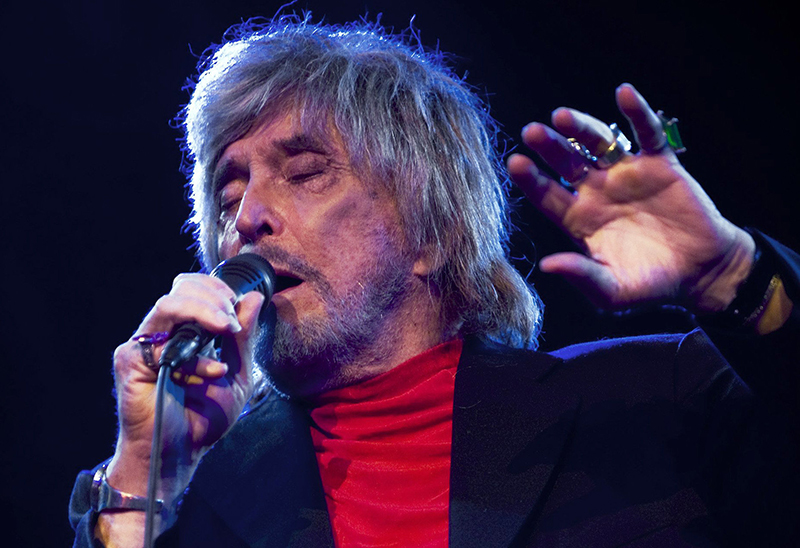 Mark Murphy: This is Hip, a biography by Peter Jones.

When it comes to iconic male jazz vocalists there is one performer that is impossible to ignore, Mark Murphy. Born in Syracuse on March 14, 1932, Murphy recorded over 50 albums for various record companies, most notably for the small jazz label Muse from 1973 to 1991. Celebrated for his interpretations of the American Song Book repertoire Mark Murphy was perhaps equally well known for his own lyrics to jazz classics like the saxophonist Oliver Nelson’s “Stolen Moments” and Freddie Hubbard’s “Red Clay. In October 2015 Mark passed away from complications of pneumonia at the age of 83. Having influenced generations of jazz vocalists it is notable that there is no published biography marking his legacy. The good news is that this is about to change. British writer Peter Jones and Equinox publishing are about to publish a biography titled: This is Hip: The Life of Mark Murphy. We asked Peter if he would be able to give Jazz In Europe the back story.

In October 2015 I was at home in London listening to Jazz FM when I heard that Mark Murphy had died. The great American jazz singer had only recently edged on to my radar; as a jazz singer myself I’d begun performing songs he made famous, such as Stolen Moments. As time went on I discovered his versions of other tunes, like Benny Golson’s Along Came Betty, Tadd Dameron’s If You Could See Me Now and Sonny Rollins’s Doxy, and started singing them too. By now I had formed a clear image of Mark Murphy as a bebop specialist, someone who took tunes previously known as instrumentals and added his own words. He also seemed to have an elusive hipster quality to him. He was certainly a lot hipper than most other male vocalists I’d heard, with the possible exception of Jon Hendricks.

On the day Mark died, Jazz FM played a ballad of his that I’d never heard before – Our Game. They carried on playing it over the week that followed. It was the most spellbinding thing I’d ever heard. I found out that it came from an album called Once to Every Heart that Mark had recorded in 2002 (although it wasn’t released until three years later) with the song’s composer Till Brönner, who was based in Berlin. I wanted to know more about Mark Murphy, and began looking online for a book about him, but there wasn’t one. I discovered a couple of interviews and some reviews of his albums and live performances, but that was all.

What could I do? Should I sit around waiting for someone to write a biography, just so I could read it? And very quickly, the idea came to me that maybe I could write it myself. There was only one small problem: I knew almost nothing about Mark.

However, being a journalist as well as a singer, I was used to this situation. You just have to go and do the research. I submitted a proposal to Equinox Publishing and received an encouraging reply. They ended up commissioning me, and so began the long process of finding out about the man who had become my favourite jazz singer. Starting with a handful of people who had known him, I gradually expanded my circle of acquaintance, interviewing members of his family, friends, other singers, musicians, arrangers, writers and record company people.

I also found out that there had been a fanzine – Mark’s Times – devoted to Mark. It was produced four times a year by a guy who lived in the north-east of England, and it continued for 20 years. And luckily it turned out that the only person in the UK with a complete set of Mark’s Times lived only an hour from me. I read through all 74 issues, some of them 150 pages long.

So what did I learn from all this? Having started out as a fan, I’d become an expert. I learned that Mark Murphy was just as great as I’d suspected; greater in fact, because he could do everything. He wasn’t just a bebop singer and a balladeer; he immersed himself in Brazilian music, making several albums of songs by people like Ivan Lins and Milton Nascimento. I’d known he was a master of scat, but I didn’t known about the way he used poetry and other forms of the spoken word. He was a fantastic improviser, who didn’t just sing over the top of whatever the band was playing; he would direct the band. Very often he would tell the pianist to stop playing so he could do something with just the bass or the drums. He would do weird things with the mic, like zooming it back and forth, or putting it under his chin.

He was not a prolific songwriter, but the songs he wrote are beautiful. On stage, he would tell stories. One time he was playing a gig in an English country village, and someone said it looked like the kind of place in which Agatha Christie would set a murder mystery. Mark went outside and thought for a few minutes. He came back in and as the first tune started he told the audience, ‘I had a vision, outside there. I saw two figures hurrying through the rain to get to this gig. One of them was Miles Davis and the other was Jane Marple. And they bumped into each other, and he said, “Hey Jane baby…”’

Although Mark had a long career – 60 years – and released nearly 50 albums during his lifetime, he never made any money. He wasn’t interested in money. At various times in his career he was presented with the opportunity to make some, but always turned it down. It seems inconceivable, but as poor as he was, if he didn’t like the sound of it, he wouldn’t do it. He was once offered many thousands of dollars to be in a commercial for IBM. All he had to do was get on a plane, fly to Texas, work for an hour, and fly back again. But he said no, because it wasn’t his thing. He had too much integrity. In fact, he regarded himself as an artist, first and foremost, rather than an entertainer.

He loved working in Europe. As well as living in London for ten years during the 1960s, where he often played Ronnie Scott’s and was heard constantly on BBC Radio, he had a strong relationship with the Netherlands. His greatest collaborator there was the producer Joop de Roo, who booked him for countless radio appearances with the Metropole Orchestra over many years. Joop compiled the best of these for a wonderful album called The Dream, which came out in 1995. There was also an earlier album called North Sea Jazz Sessions Vol.5, also recorded for radio throughout the early Seventies with the Louis Van Dijk Trio. It contains Mark’s first recording of his signature tune, Stolen Moments.

Mark sang in almost every European country at one time or another, including France, Sweden, Norway, Denmark, Italy, the former Yugoslavia, Poland, Czechoslovakia (as it then was), Austria and Germany. In Munich he worked with the pianist Andy Lutter: one of the things Mark liked to do was to write what he called ‘jazz haiku’ – short poems – and Andy would set them to music. Unfortunately Mark became ill and never recorded them, but last year Andy released a great album of Mark’s haikus called Café Paranoia with the UK singer Tina May, so we’ve finally got to hear them.

In the book there’s a whole chapter about Mark’s teaching. He made a big impression at the University of Music and Performing Arts in Graz, near Vienna, where he taught jazz singing between 1990 and 2001. The head of the jazz course, Karlheinz Miklin, told me many funny stories about Mark. One time, he noticed a group of guys selling newspapers at a busy intersection in Graz, all shouting out the titles of the papers they were selling. Mark started to direct them as if they were a choir. The police arrived and asked him who he was. ‘I am Professor Murphy,’ said Mark, so they took him to the police station, thinking he was a lunatic.

Mark Murphy lived through some of the most interesting times in jazz. He started out as a crooner in the mid-1950s, recording for Decca and then Capitol, but it never felt quite right to him. He had much bigger ideas than just being a professional entertainer. What mattered to him was the work, not the fame or the money. And he could have had both if he’d wanted them.

This is Hip: The Life of Mark Murphy is published by Equinox on 1st March.

More information can be found at Peter Jones website.