Interview with Jason Miles | Kind of New and more Part 2. 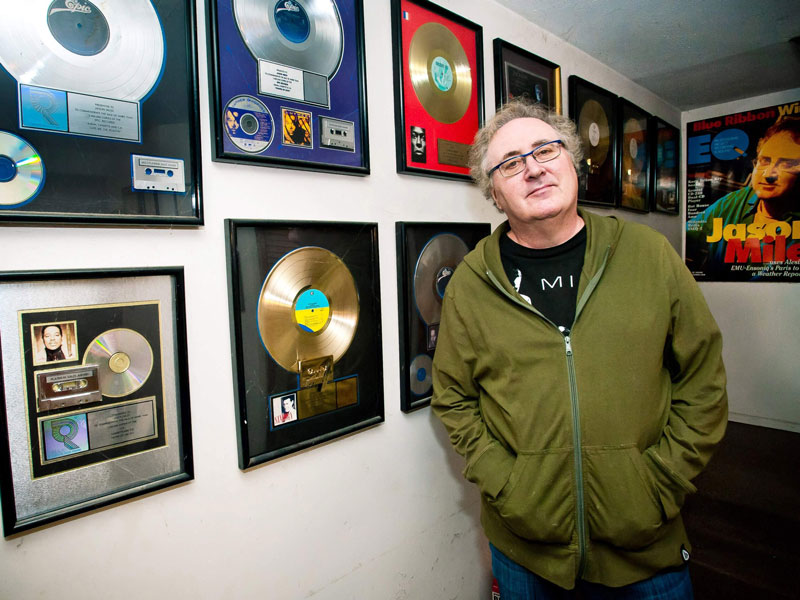 Welcome to part two of our interview with Jason Miles. In part one of the interview we spoke about his Kind of New project and his up-coming European tour as well as Jason’s view on the current state of jazz anno 2018. In part two we talk about topics such as the mentoring younger musicians, politics and jazz and how Miles Davis saved Jazz from dying.

During his career Jason has worked with most of the giants of the music industry including Whitney Houston, Michael Jackson, Aretha Franklin, Chaka Khan, Michael Brecker, The Crusaders, George Benson, Joe Sample, Grover Washington Jr., David Sanborn, Marcus Miller and this is just the tip of the iceberg.

This aside, it’s Jason’s work with Miles Davis that he is best know for. Jason was responsible for the bulk of the Synth work on the album Tutu and has been called the “third major element behind the sound of that album” of course meaning Miles Davis, Marcus Miller and Jason Miles. With the success of Tutu it’s not surprising that Jason also played a prominent roll on Davis’s follow-up albums Siesta and Amandla.

For those readers that missed part one of the interview you can read it here. Also for those interested in seeing Jason live on his up-coming European tour, you can see his tour dates here…

Andrew Read: I’ve always said that it doesn’t matter where jazz goes as long as it takes the tradition with it. What are your thoughts on mentoring younger musicians and what can they learn from the older generations that will help their future.

Jason Miles: It is my responsibility to spread the knowledge and wisdom that I have learned from many of the masters who I learned from. I have been privileged to know and learn from many. In 1974 I was studying jazz piano with a great player named Mike Melillo who was playing with Phil Woods. He said I will teach you a lot but the most important thing you will learn is how to be a musician. I didn’t understand it at the time but as time went by I understood more and more of what he meant.

Young musicians these days seem to have their own agenda. I wanted to play and work with the best musicians that I admired and followed for years. It seems like many of the younger generation want to play with their peers and don’t care as much as we did to be exposed to the masters – maybe because so many of them are leaving us. It’s not like it was say back in the 1970s with a lot of active bands – how many cats played with Woody Herman, Maynard Ferguson, Art Blakey etc – that doesn’t happen any-more. They also have to want to learn. Too many think they know it all and there is a short cut to the top. I’m trying!

AR: 2017, largely due to the current state of world politics, seems to me to be the year of “Social Comment” themed CD’s. What are your thoughts on this, does Social Comment play a role in Jazz?

JM: I think social comment and Jazz go together. I don’t think you can hide from that Jazz and Blues came out of struggle and that music cuts so close to ones heart. It screams social justice and equality. When you listen to Coltrane how could you not feel like he’s making a social comment, especially Angola, Alabama, Love Supreme. Look at Miles and Jack Johnson – powerful statement – I believe in Jazz having a major voice in our society but there are powerful voices who hold it back and it doesn’t seem like many musicians in all kinds of music are speaking up. In the US We are all so fractured and divided these Days. Music and Jazz in particular should be a strong voice – the Arts and artists always lead the way – we need that more than ever.

AR. When we spoke prior to the interview you suggested “How Miles Davis saved Jazz from dying” as a topic. We all know you played a prominent roll in the production of his albums “Tutu, Music From Siesta and Amandla, so I’d love to hear your thoughts on this.

JM: In 1967 Jazz was still a vital force but to me in many ways it was dying. Great musicians but there was no real seismic event to leap it into the future…Then we got a hint of the future with Miles and In A Silent Way – Eyebrows were raised – Then Boom! Bitches Brew. An album so fresh and different, all of a sudden the baby boomers were checking it out. It was the first Jazz Gold Record and a new generation discovered Jazz. Here comes Miles’s Musical Children. Weather Report, Mahavishnu, Return To Forever, Headhunters and other offshoots – put the Crusaders in there for some other vibes and a whole new market for Jazz was born. Then the boomers started to discover real jazz, Monk, Bill Evans etc. It all started with Miles, I truly believe he literally saved jazz and expanded the market.

AR: Recently we published an article looking at the impact Bitches Brew had on the jazz world back in 1970. In the article we looked at the reviews the album received and some of the comments both critic’s and fellow musicians had made. The album was divisive to say the least and split the jazz world at the time into two distinct camps. As a Miles Davis Alum, what are your thoughts on this Album.

JM: As I mentioned in the previous answer, Bitches Brew was the album that shook up the Jazz world when it came out. Some amazing musical conversations going on and for me being a keyboard player hearing the effect that the Fender Rhodes had on that album and who was playing it..just puts in musical nirvana.

AR: How do you see the role of electric instruments in jazz?

JM: I would like it to take a bigger role in Jazz. The key is always who is playing the instruments and the compositions. Electric instruments and keyboards can have a great vibe and add nuance to the music it doesn’t have now. I loved Weather Report, Joe really understood how important these instruments were to the music he was creating. I am lucky that I saw that all go down in real time. Artists like Herbie, Chick, George Duke, Zawinul, Jan Hammer and others really understood how to express themselves on their instruments and knew how to write for them as well.

Add a great electric bassist and drummer and you can take it anywhere. You also need to understand electric ambience as well. There are some guys out there who I have heard who are really good with electronics as well..I hope they stay the path. I also appreciated a band like Pat Metheny who really blended acoustic concepts with electric instruments. Lyle Mays – Yeow – so bad.

AR: Your not only known as a live performer but also for your studio work. Obviously these are two different beasts, but how do you keep a consistent vision between these separate centers of creation. I know this sounds a little esoteric however creating on stage and in the studio requires such a different mindset, I’d like to here your thoughts on this.

JM: Early on I was told “Live is Live and Studio is Studio” it’s true, two totally different centers of creation. When you are in the studio my concept is always – I need to make music that people will be listening to for decades. Everything is magnified in the studio so you need a mindset of perfection. I want to be able to live with the music I create and feel that every time somebody listens to it, I want to make sure they will listen to it again.

A great producer and musician Deodato once told me that it’s all in trusting your ear. I believe it takes some years to develop a great ear in the studio. I’ve always been amazed by some of the producers I’ve worked with back in the 1970’s and 80’s and how really turned in they were. Nothing got by them – I learned a lot.

Live is another state of mind. I’ve been so lucky to see so many great artists perform over the years but I was really fortunate to always have great seats to see Luther Vandross. I had along association with him, he was a master on the stage. I saw how he was in such control of the stage and the way he kept the audience engaged for 2 hours. Sitting in the 4th row gets you up close, I learned about the difference between playing for 50 people in a club and 17,000 people at the Hollywood Bowl. It’s about the set list, the build of the show and understanding your surroundings and not to foget the right musicians! We play for the audience to make them leave their everyday vibes behind for a while.

AR: So to finish off, what’s next for Jason Miles.

JM: I hope what’s next is continued good health as the primary thing. Spending time with my wife as well, but from a musical vibe, I want to keep on working to get the music out there and keep on working with excellent artists. I have many places on my musical bucket list and I have some great shows to bring to them. I’ve played at some great places but not enough. I am working with some younger artists as well whom I feel have great potential. I’m using my experience to help them move along. I mentioned I am trying to educate them with what they need to prepare to have a successful career. I like doing clinics and seminars, it’s great to see the audience absorb the knowledge. It’s way different these days with it being harder than ever to make a living from recorded music.

Challenges are always looming but I still hear sounds that inspire me and as long as I keep on hearing them I will continue.

AR: Thanks Jason for taking the time to speak with us and I wish you all the best with the coming tour.

Jason Miles will perform in Europe opening at the Blue Note in Milan on the 25th of February. Full tour dates are listed below, for more information and tickets click here..