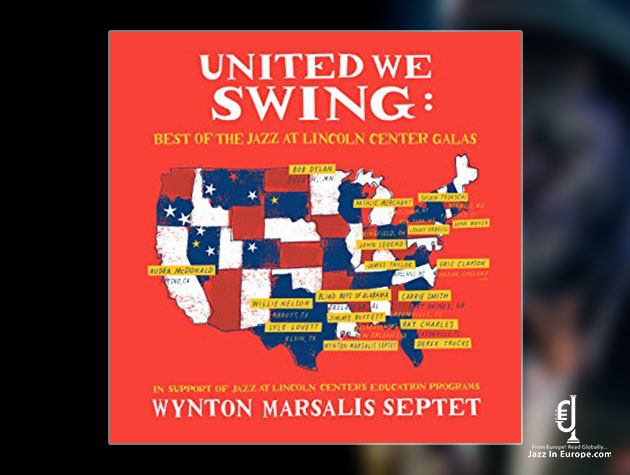 Each year, the Jazz at the Lincoln center fundraising galas bring Wynton Marsalis together with an illustrious group of performers. These gala’s not only raise money for the organisations education programs but produce some of the most memorable nights of music held at the iconic New York center of culture.

Recorded between 2003 and 2007, the organisation stated that “United We Swing” finds an unparalleled array of musical talent that collectively boasts 94 Grammy Awards joining Jazz at Lincoln Center Managing and Artistic Director Wynton Marsalis and his Septet. Together, they perform blues-inflected versions of iconic American repertoire.

These one-night-only, live performances have never been released before. They include Lenny Kravitz performing Marsalis’s hypnotizing, New Orleans-inflected arrangement of Kravitz’s own song, “Are You Gonna Go My Way”; Susan Tedeschi and Derek Trucks uniting for a stirring, infectious take on Civil Rights anthem “I Wish I Knew How It Would Feel to Be Free”; Bob Dylan adding harmonica licks to a deeply felt, in-the-pocket rendition of “It Takes a Lot to Laugh, It Takes a Train to Cry”; and Ray Charles taking the stage for one of his final performances to play “I’m Gonna Move to the Outskirts of Town.”

Together these artists raise their voices to highlight jazz’s importance to worlds cultural heritage and to remind us that, even in divided times, music can unite us all. All proceeds from the album will go toward Jazz at Lincoln Center’s education programs, which introduce thousands of children to jazz each year.

The album will be officially released on March 23rd and will be available in CD, Vinyl (with digital download), and digital formats. “United We Swing” is now available for pre-order at the Jazz at the Lincoln center website and Amazon.

Jazz at the Lincoln Center stated that they will be sharing more music (and videos) from United We Swing in the weeks to come, but for now, they have this 15 sec teaser.

Stay Tuned for a full review of the album on this platform in the month’s.